The NRL and AFL fixtures are in disarray after Queensland declared no professional sport can be played in the state after a snap three-day lockdown was announced.

Both footy codes have postponed matches following the decision.

The NRL is clinging onto hope they will be able to continue their season on Sunday after all three of Saturday’s matches were postponed amid Queensland’s lockdown.

The NRL was dealt its biggest challenge since last year’s shutdown on Saturday morning when a snap three-day lockdown was ordered in the state’s southeast.

All professional sport was ordered off, with 15 of the NRL’s 16 teams currently based in the region.

The NRL, in a three-and-a-half-hour attempt, tried to keep Saturday’s games on before making a final decision to postpone the matches.

They are, however, holding hope they will be able to play matches on Sunday, with the potential of moving teams into regional areas or interstate.

But as of Saturday afternoon, St George Illawarra, South Sydney, Canberra, Newcastle, Melbourne and Penrith were yet to be told when their postponed match will be played.

“The NRL has postponed all of today’s round-20 NRL premiership matches,” the league said in a statement.

“The NRL respects the decision of the Queensland Government to keep the community safe and healthy following local transmission of COVID-19 in southeast Queensland.

“The NRL is continuing discussions with the Queensland Government to possibly play matches tomorrow.” 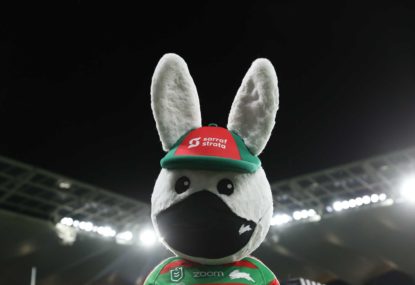 The Rabbitohs mascot is seen wearing a mask during the NRL Semi Final match between the Parramatta Eels and the South Sydney Rabbitohs at Bankwest Stadium on October 10, 2020 in Sydney, Australia. (Photo by Mark Kolbe/Getty Images)

Rabbitohs players had already taken off for Rockhampton for their clash with the Dragons when the lockdown was ordered, prompting them to fly back to the Gold Coast on arrival.

It came as St George Illawarra were unable to leave their Brisbane hotel as they prepared to fly for the 3pm match, before all other teams were also ordered back into a strict bubble.

The decision to postpone the Knights-Raiders game will have implications, with Newcastle scheduled to play again on Thursday night.

Each team requires a five-day turnaround between games, meaning the Thursday night game against Brisbane will also need to be altered.

It came after Queensland’s chief health officer Jeannette Young confirmed NRL games could not be played in Brisbane or the Gold Coast.

“There will be no football matches,” Young said.

“So, no community sport, no professional sport, nothing for the next three days. Starting as of 4pm today.”

If games do go ahead on Sunday it will also have to be moved, given Cronulla and Manly were scheduled for Redcliffe and Gold Coast were meant to host Canterbury.

Both the Moreton Bay and Gold Coast LGAs fall under the lockdown zone, after six new locally-acquired cases were confirmed on Saturday.

A decision on all games will likely need to be made quick, with the ACT Government saying they will welcome teams to play in Canberra but only if they leave before 4pm Saturday.

Other challenges also remain with players’ families remaining in quarantine on the Gold Coast, potentially creating issues if the competition is shifted elsewhere.

The NRL do have room to move in their schedule if games have to be pushed back or the competition is suspended, with the end-of-year World Cup unlikely to go ahead.

Mid-week games were used by the AFL last year and that could also come into play in the NRL.

Meanwhile the The AFL fixture is again in disarray, with three matches postponed and several clubs fleeing Queensland because of thelockdown.

Saturday’s Gold Coast-Melbourne and Essendon-Sydney fixtures have been affected, as has Sunday’s GWS-Port Adelaide contest.

AFL fixtures boss Travis Auld said the league is working through its options with how to fit those games into the future schedule.

“The evolving COVID situation in Queensland has seen the state announce a three-day lockdown and, as a result, we have had to postpone three games scheduled to be played in Queensland in round 20,” Auld said.

“These games will be rescheduled to be played at a time to be confirmed.

“While the pandemic will continue to challenge us, the health and safety of those in our game and the wider community remains paramount.”

Melbourne players were on a flight to the Gold Coast on Saturday morning when the south-east Queensland lockdown was announced.

The AFL confirmed the charter flight will now return to Melbourne later on Saturday.

GWS, Sydney and Essendon have been operating out of temporary bases in Queensland but the Giants and Essendon are due to fly from the Gold Coast to Melbourne together on Saturday afternoon, while Sydney and the Suns are expected to follow suit.

GWS heading to Melbourne could see them play Port Adelaide, who are currently based in Melbourne, in Victoria on Sunday.

The MCG, Marvel Stadium and GMHBA Stadium are currently all available on Sunday.

Port Adelaide were due to fly to the Gold Coast from Melbourne but are now in a holding pattern awaiting further information.

Power coach Ken Hinkley’s scheduled pre-match press conference on Saturday morning was postponed at the last minute, with the club set to provide an update on their plans later in the day.

Brisbane also postponed coach Chris Fagan’s Saturday afternoon press conference in Launceston, where the Lions are scheduled to take on Hawthorn on Sunday.

That match has been given approval to go ahead as planned because the Lions flew out of Queensland earlier on Saturday.

Brisbane are due to take on Fremantle in Perth in round 21 and could stay on the road until then.

A VFL match between Gold Coast’s reserves and Southport was called off midway through the first quarter on Saturday soon after the Queensland lockdown was announced.

Essendon’s VFL game against Aspley and Brisbane’s game against Sydney have been postponed. The six clubs will play their rescheduled games in their bye weekend.