Brisbane halfback Tyson Gamble says he will fight “tooth and nail” for the halfback jersey next season, after delivering one of his finest performances in a 37-18 derby win over North Queensland.

Gamble’s direction and communication was imperative to the Broncos’ domination of the Cowboys on Friday, assisting in three tries as his side registered their fifth win of the season.

With South Sydney star Adam Reynolds a shoo-in for the number seven jumper next year, coach Kevin Walters says he sees Gamble as a high chance to partner him. 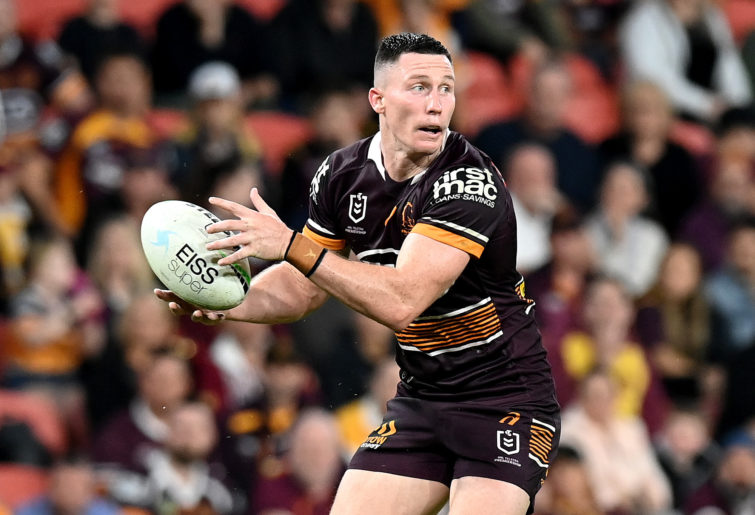 “Certainly. He’s a competitive guy and a big strong body, I love his competitive nature more than anything,” Walters said.

“He’s got a few rough edges around him but I like his competitiveness and he’s doing a good job for us.

“He’s worked hard to get to where he is, he’s one of those guys that have bounced around a few clubs and hasn’t been handed the golden run. So he’s working really hard, which we’re really happy with.

“He likes directing the opposition as well, which is something we’re trying to get out of his game.”

Gamble told reporters he rated the derby win as one of the best in his career and he hopes to continue delivering for the Broncos in years to come.

“This has been my first really full year in the NRL and I’m loving every second of it,” he said.

“I know Adam’s (Reynolds) coming next year and he’s obviously pretty much guaranteed that spot and I absolutely would love nothing more than to be partnering him in the halves.

“There’s obviously a lot of competition there with Crofty (Brodie Croft) still being at the club, Kotoni’s (Staggs) name has been thrown around for the six jersey but I’m always down for competition.

“I’m 110 per cent in for a battle and I’ll fight tooth and nail to get that six jersey. That’s just part of my nature and who I am.”