After the Tigers led 10-0 at the break in Brisbane, the Tigers fell apart, lacking direction in attack and leaking poor tries in defence to eventually fall 18-16.

The result snapped a seven-game losing streak for the Warriors, who are also only a slim mathematical chance of making the finals.

But it represented a significant hit to the Tigers’ chances of ending the longest finals drought in the NRL.

The joint-venture are now equal with the Warriors at 6-13, meaning even five straight wins to end the season may not be enough to make the finals.

They have one of the easier runs home of the finals hopefuls but still face Cronulla and Penrith in Rounds 23 and 24.

Another premature end to the year would heap further pressure on coach Michael Maguire, who has spent the season with his position a point of continued conjecture.

“It makes it hard (to make finals) but that’s the position we are in,” Maguire said.

“We’re all very disappointed. It’s obviously a big moment for all of us.

“You work every week to give yourself an opportunity. And the second half was definitely not the style we planned.”

The Tigers’ final ten minutes summed up their frustrations of the past decade.

Trailing 18-16, they had a 90-metre try to Luke Brooks denied after replays showed a kick had bounced forward off his arm before he picked it up and ran away.

Then in bizarre scenes, they failed two unlikely shots at 40-metre field goals to level the scores and didn’t get a man to dummy-half as they turned over their last attacking raid.

“It got frantic,” Maguire admitted.

“Everyone was trying. But you have to concentrate on that moment in time.

“You have to get your dummy-half to the play the ball or someone needs to jump in there.”

Moses Mbye briefly starred at the back in his place in the first half, setting up one try and scoring another.

But they conceded three tries in 16 minutes after the break, including one when they allowed Bunty Afoa to isolate Jacob Liddle and another when Euan Aitken went over untouched from a short Tigers dropout.

The gritty win was a fitting tribute to Roger Tuivasa-Sheck from the Warriors, after they farewelled their captain and Leeson Ah Mau from their Australian camp a day earlier.

“I think the boys certainly would have wanted to put on a good one for his departure,” coach Nathan Brown said.

“He’s certainly a very popular member of the club, Rog.

“He has been through some tough times in the past two years and probably made as many sacrifices as anyone with his family situation.” 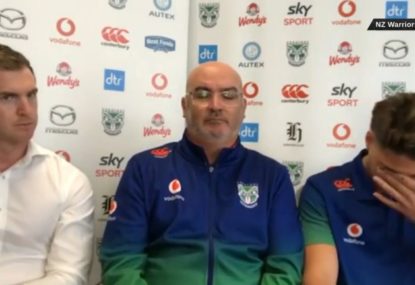