McSweyn, the 1500m national record holder, grew up on the tiny island off the coast of Tasmania, population 1300, and his big events can stop the town like the Melbourne Cup does the nation.

On Main Street there’s a roadworks sign that displays the start times of his big races. Covid has impacted that, as it has so much else of Australian life, and on Monday afternoon the sign was telling the locals they had to check into shops because of the virus.

In the morning they hope it’s back to the old normal to remind everyone on their way into town that McSweyn sets off in the third heat of the 1500m at 10.27am AEST Tuesday.

“The island’s about 64km north and 32km across. There’s not many people who make it in sport from there but it’s pretty cool,” McSweyn says.

His father Scott and mother Jacky Richards have an Angus beef and Merino sheep farm.

“Me and my twin brother used to work a lot in the shed, roustabouting when we sheared sheep, even moving cattle.

“We’d be running around chasing cattle like a sheep dog with my dad in the ute and my mum sometimes on a motorbike.

“I remember fencing, we did that a fair bit. My old boy used us as free employees as much as he could.

“But when you’re young everything is an adventure and having a twin brother you have a best mate with you, that was cool.”

McSweyn was into tennis and footy, and sport was in his family with dad Scott having made Australian teams as a weightlifter. It was through that weightlifting connection that Stewart, almost by accident, had the fire lit to become an Olympian.

“A big moment for me was when I went to the 2006 Commonwealth Games and I saw Craig Mottram in the 5000m,” McSweyn says.

“I was about 11 and hearing 90,000 people erupt when he hit the front in front of the East Africans pretty much motivated me.

“It was that moment. I never heard anything that loud. It’s a moment that sits with you.”

Around the same time, he started showing promise in his local school’s cross country races. But King Island is tiny, and he wasn’t sure if he was good good, or just King Island good.

“My dad used to do weightlifting so he wanted to go over to see that so we went over and watched a few events.

“I was still a skinny little kid. I didn’t think there was a chance of being a weightlifter.”

Instead he was entranced by the track – watching Asafa Powell’s sprint double, and the crowd going nuts as Kerryn McCann won the marathon.

McSweyn and his brother went to boarding school in Ballarat, a mecca for distance running, and after several years of making nationals finals without winning many, he cracked the world junior cross country team.

But around 19, he stalled after moving to Melbourne.

“I quit for eight weeks,” he says. “I got that national guernsey and I kind of lost the plan and didn’t think any improvement was there. So I just focussed on uni.”

A close friend and world championship runner Brett Robinson invited him to train at Melbourne Track Club where he started off hiding up the back of the pack, but was spotted by MTC’s coach Nic Bideau – the man behind our leading distance runners.

“I thought I don’t know what he’s seeing. I don’t think I can ever break 14. He got that one right.

“That’s one of his biggest strengths he’s quick to open your eyes to what you can achieve.”

McSweyn flourished at MTC, then found himself in the world’s most glamorous cities racing alongside Olympic and world gold medallists, cheered on by tens of thousands.

“It’s one of those pinch yourself moments,” he says. “Growing up on a farm and you don’t see that many people and some of the stadiums you race at there are 70-80 thousand people.

“As a kid you watch the AFL Grand Final and think that would amazing. To do it is special. You have to enjoy it because you don’t know how long it will last.”

No matter where he is, his mum and dad, and the proud folks of King Island are never far away.

“Whenever I race, it can be 3am, mum and dad will be finding a Eurosport stream. I’ll race, get off the track, look at my phone and have a message from my mum saying good run.

“Each week after I run well my mum will ring me and tell me she’s had 20 or 30 people stop her in the supermarket to say how well I’m going.

“That community involvement is pretty cool. I get to go home for a couple of weeks each Christmas and it’s pretty crazy. I’ll walk down the street and have people telling me they’ve been watching my races in the Diamond League.”

On Thursday night, when the semis are to be run, both the pub and the club are planning special events and a crowd will be be nervously chewing on their ‘Go for Gold Stewy Parmis’ (ham, cheese, Napoli sauce and golden rings of pineapple on a lean mean chicken schnitzel). 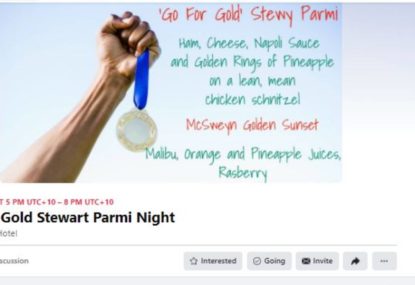 They’ve got big plans for Thursday night in King Island.

“We’re all going to be cheering him on TV,” King island Club manager Lindy Keeley told The Roar. “We had a lightning strike and we lost reception but they’ve fixed it.

“It will be busy but a lot of people will stay home and drink and watch it at home because of drink driving laws and some will go to other peoples places as well to cheer him on.

“I’ll be working at the club and we’ll have a few in after footy training and they’ll all be cheering him on. And being a local boy he’s really proud of where he’s from.”

McSweyn was an impressive qualifier through Tuesday’s heats and sent a message of thanks to his home town, where the local school changed it’s recess time to allow the kids watch him race.

“I love the support,” said McSweyn after his run. “I see every message. It definitely lifts me to another level when I’m out on the track.”

Stewart McSweyn does it the only way he knows how, asserting his presence at the front of the race. He progresses to the semi-finals of the 1500m after finishing third in his heat in a time of 3:36.39. #TokyoTogether #ThisIsAthletics #Olympics #Athletics pic.twitter.com/c6ICUdzHF8