'Yeah I was bummed about it:' Longley, Jordan finally speak out on Aussie's Last Dance snub

The Roar
2nd August, 2021
7
Join the conversation
4717 Reads
Advertisement
Write for The Roar

Australia’s Luc Longley, a key member of the successful Chicago Bulls teams portrayed in the Last Dance has finally revealed his hurt at being blanked by the documentary, with its star Michael Jordan admitting the Aussie should have featured more prominently.

“Sitting there on the couch and watching episode after episode where I wasn’t in it — yeah, I was bummed about that,” Longley told Australian Story, to air on ABC TV on Monday night.

When the 10 episodes beganm to air on Netflix, Longley was inundated by media requests for comments butu declined them and then changed his number.

“I didn’t say anything in the media because I hadn’t finished seeing it and I didn’t know what to say,” he says. “Certainly nothing constructive at that point. 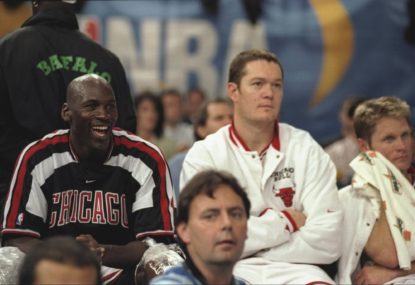 “Why was I not in the doco? I don’t really know, to be honest.

“The self-deprecating Australian in me thinks it’s because I’m not that exciting. I was playing a huge role but it wasn’t one that was that sexy.

“There were so many beautiful, bright, shiny stars out there to focus on, that, you know, it makes sense to me that that story wasn’t about me. Makes perfect sense.”

Jordan told Australian Story he regrets that Longley was left out. “I can understand why Australia would say, ‘Well, why wouldn’t we include Luc?’ And we probably should have. And if I look back and could change anything, that’s probably what I would have changed.”

The series director Jason Hehir had claimed Longley’s omission as an interviewee was about budget and logistics.

“I didn’t expect to be a heavy feature in it because they hadn’t interviewed me, but I did expect to be in it more than I was,” Longley says.

His former Bulls teammate Steve Kerr, who also featured prominently, said “I know it hurt him.”

“I watched it with my kids and I thought about Luc’s omission from it and how much he lost from that, and I feel bad for Luc,” said Kerr.

Longley’s wife, Anna Gare, said it was a tough time for him.

“I think the worst part for Luc was that the phone was ringing all day and night,” said Gare. “Everyone wanted to know, ‘Why aren’t you in it? … How are you feeling right now?’ Like, drama, drama, drama.”

Longley said he was disappointed the Australian component of that 5 time winning team went untold.

“I would like to have been in the doco so that Australian kids saw that there was an Australian in that team doing that thing,” he said.