Botic, upon his announcement, was quoted as saying: “I had an amazing experience in Germany and I am now looking forward to playing in the A-League.

“To be able to continue my footballing career under a legend like John Aloisi was a big drawcard for my move, and to learn from the likes of (Alessandro) Diamanti and (Victor) Sanchez also motivates me.

“I’m ready to work hard this pre-season and hope to make a strong impression.”

Botic seemed destined to be a footballer, especially since his cousins are Socceroos Tomi and Deni Juric. He made the highly anticipated move to Europe following a prolific 18-goal haul for Rockdale City Suns’ under-18s team.

A host of European clubs were fighting for his coveted signature after a great tournament at the FIFA Under-17 World Cup in Brazil in 2019.

He scored four goals in the group stage for the Joeys, leading them to a place in the knockout stages of the tournament for the first time since 1999. 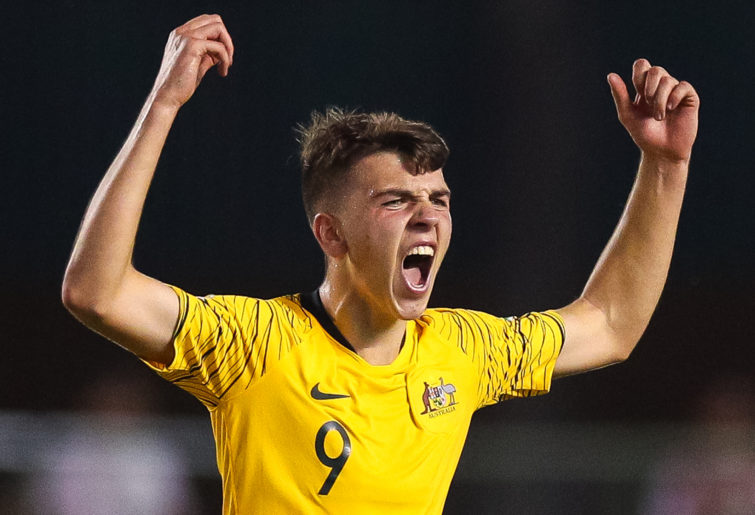 Botic trialled at Manchester United and had interest from Bayern Munich as well as Everton before settling on Hoffenheim.

Botic spent a week with United and scored in a 4-0 win against Newcastle, however they wanted to have another look before deciding whether to sign him.

Due to their indecision and a belief that his skill set would be better suited to Germany, Botic ended up putting pen to paper with Hoffenheim.

Hoffenheim is a club that is well known in developing talented young players and it wasn’t long before they had started comparing him to another famous Australian number nine of Croatian heritage, Mark Viduka.

Although smaller in height and weight than Viduka, Botic possesses a similar deft touch and calculated finishing skills.

Throughout his time in Germany, he was continually being played in the Viduka role where the ball would be played to Botic’s feet and he would need to hold it up before passing to onrushing attackers or tried to roll his defender and keep the attack going.

He stood out playing for Die Kraichgauer’s under-19s and in one game against SpVgg Unterhaching he scored twice and set up a goal in a 4-1 win.

Botic scored three goals in seven games, before suffering from niggling soft tissue injuries that have ruined the careers of many promising young Australian players.

Just as his injury woes were starting to clear up, his progress was wiped out as the world battled COVID-19.

In signing for Western United, Botic will find himself being coached by another legendary Socceroo John Aloisi.

Aloisi will hope to continue moulding Botic’s Viduka-like potential by giving him the responsibility of leading the line for a club that has been in turmoil away from the pitch since its introduction to the A-League.

It’s no secret that United off the pitch seem to be unravelling. The club have barely informed fans of what’s been going on and not a single shovel of dirt has been moved in relation to the stadium they had promised would be built.

With construction still up in the air, United have lived a nomadic lifestyle, playing all over the country and struggling to attract fans due to this.

The signing of Botic still won’t make Western United a favourite to lift a trophy next season, however what it will do is put some eyes on this team with the baby Mark Viduka, Noah Botic, as the main striker.