How Rassie Erasmus (over)ruled World Rugby in the second Test

If it had been a boxing contest, it would have been stopped to prevent further punishment. The triumph of the South Africa director of rugby Rassie Erasmus was not only over the British and Irish Lions, but over World Rugby in the build-up to the second Test at Cape Town.

There is no other governing body in professional sport which would have given Erasmus such license to criticise its officials and not issue immediate sanction.

Rassie has swapped roles effortlessly, from director of rugby, to water-boy, to social media influencer.

By the end of the game, the shape-shifting was complete. He was orchestrating the officiating crew from the sideline as expertly as Nigel Owens used to do in his pomp from the middle of the pitch. The broad grin on his face told you everything you needed to know.

Erasmus broke one of rugby’s great unwritten rules by criticising referee Nic Berry publicly, in the aftermath the first Test. At a deeper level, he was also undermining the vision of the game World Rugby set out in their 2020 law amendments.

International teams are afforded the right to discuss law interpretations both before and after a game is played. The understanding is that the fruits of those meetings remain private and the topics under discussion are not aired in the public domain.

Coaches in football are penalised severely for issuing opinions on the performance of the referee, even in short media interviews after the event. To the best of my knowledge, no football coach has yet taken to social media to deliver a 62-minute video critique of alleged officiating errors.

The sanctions are strict if a coach steps out of line. Back in 2016, the executive chairman of the English Premier League, Richard Scudamore, made the situation crystal clear:

“Premier League football and English football is known at home and abroad for being competitive and compelling, but also played in the right spirit.

“We and our clubs have been discussing concerns that certain elements of player behaviour are overstepping the mark – the mass confrontations, overt displays of dissent and offensive language. We are viewed by millions week in week out – including lots of young people – and it is our collective position that these types of behaviour should no longer be tolerated.

“That is why the Premier League, EFL and FA have tasked the Professional Game Match Officials with confronting these types of incidents and issuing appropriate sanctions in the form of cautions and sending-offs.

“Things happen in the heat of the moment during fast and highly competitive football; we still want to see the passion fans enjoy and demand, but players and managers have to be aware there are lines that should not be crossed.

“That is why we are working together with our EFL and FA colleagues to promote positive behaviour from all participants in the game.

“This shift in emphasis will involve PGMO referees responding more directly to these incidents and we will be communicating this to our managers, players and fans over the summer, ahead of what we hope will be another fantastic season of football.”

Two years later, match officials were given the right to issue red and yellow cards to managers and their support staff on the sidelines. Items on their menu included inappropriate language or gestures towards officials, the kicking of throwing water bottles, sarcastic clapping, the waving of imaginary cards and outright dissent.

Rugby’s proud tradition of respect for referees has been undermined by Erasmus’ recent outburst. He has opened Pandora’s box and in the process, he proposed a different model of the game to that envisaged by World Rugby in its 2020 law changes.

Key to those changes were two elements: a reduction of tackle height to the waist in order to prevent head injuries, with harsher sanctions for high tackles; and law amendments at the tackle area designed to produce cleaner, quicker ball for both sides at the ruck.

In a 62-minute outburst, Erasmus achieved the head coach’s dream. He got the law-makers and its officials playing by his rules, or the rules that suit his team the best.

The referee from New Zealand, Ben O’Keefe, unwittingly followed Rassie’s instruction manual to the letter. He shunned the Lions’ captain, Alun Wyn Jones, who had been so influential in the first Test, and he awarded 31 penalties.

There were a colossal 35 minutes of stoppage play buried within the 80 minutes the game was supposed to last, and a combined total of 81 kicks out of hand (including kick-offs and drop-outs) by both sides. Fifteen of those kicks were launched in the opposition’s half of the field.

There was little sustained, skilful attacking play with ball in hand by either team, so fearful were they of losing the ball in the wrong areas of the field. It was just as well there was nobody in Cape Town Stadium able to watch it all unfold.

This is emphatically not what World Rugby had in mind when it issued its new law guidelines in 2020. Now it has to take a stand and defend the vision of the game they embody.

There is ample material for Warren Gatland and his analytical team to present to the referee, Frenchman Matthieu Raynal, in the build-up to the third and decisive Test at the same venue next weekend, and right the wrongs of the week before.

In the interests of fairness and balance, chief among the issues will be South Africa’s attitude to the tackle and the play immediately following it. The Springboks want to get as much pressure on the receiver of a kick, or a ball-carrier as possible.

This means they make a lot of mistakes in the high kick chase, frequently taking out the ball-carrier in the air.

That is right wing Cheslin Kolbe taking out Lions fullback Stuart Hogg in the air early in the first Test. The pattern was repeated at the beginning of the second game, on this occasion with South Africa’s left wing Makazole Mapimpi chasing on to Dan Biggar. 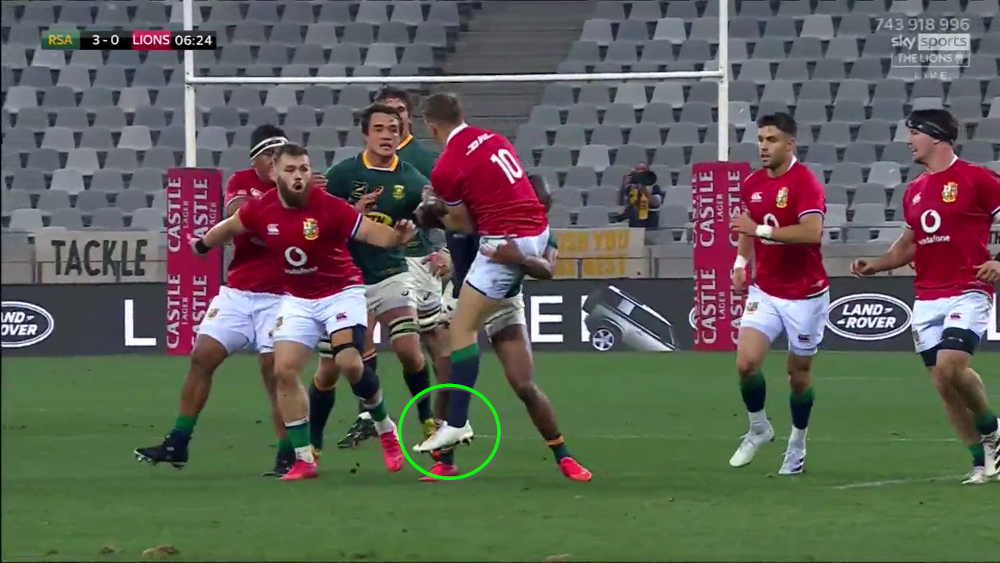 It was only a matter of time before a more serious incident occurred.

Kolbe again runs straight through the space underneath the receiver (Lions halfback Conor Murray) and that creates a dangerous situation. O’Keefe’s officiating crew decided the offence was only worthy of a yellow card, not a straight red.

In the action of making a tackle, South Africa’s players habitually do not follow World Rugby’s 2020 guideline about reducing tackle height to waist level – “Rationale: Forcing players to tackle lower may reduce the risk of head injuries to both the tackler and tackled player. It may also encourage more offloads and expansive play.”

Early in the first Test, Lukhanyo Am tackled his opposite number Elliot Daly. 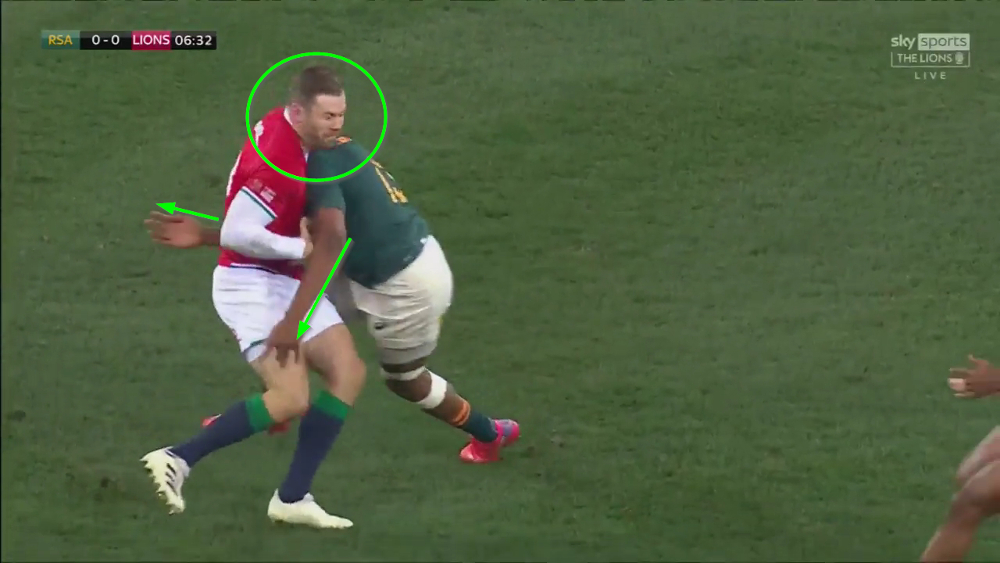 As the hit is delivered, the defender’s body is upright, with the left shoulder very close to the ball-carrier’s head and neck. The wrap with the arms is strictly token in nature.

A similar scenario led to a nasty clash of heads between Kolbe and Lions flanker Tom Curry early in the second game. 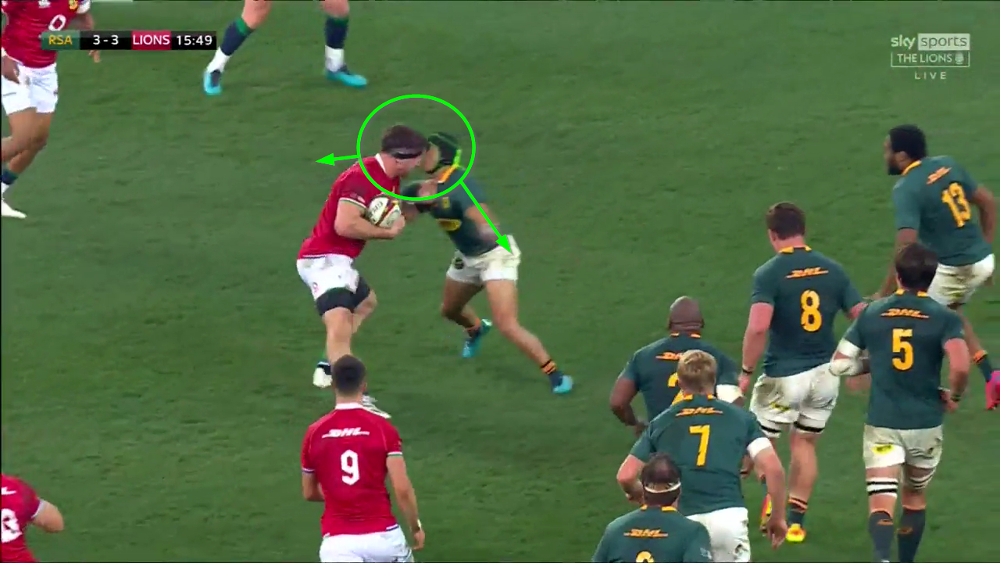 There is no attempt made by the tackler to bend at the hips and therefore, head contact is inevitable. The incident crystallises a serious player welfare issue.

The serial offender from a Lions’ viewpoint would be Faf de Klerk. Warren Gatland rightly drew attention to De Klerk’s illegal challenge on Josh Navidi during the South Africa ‘A’ game:

There is no lowering of body height, and no wrap with the arms, as the scrumhalf tackles Navidi with his head.

There were two further examples from the second Test. 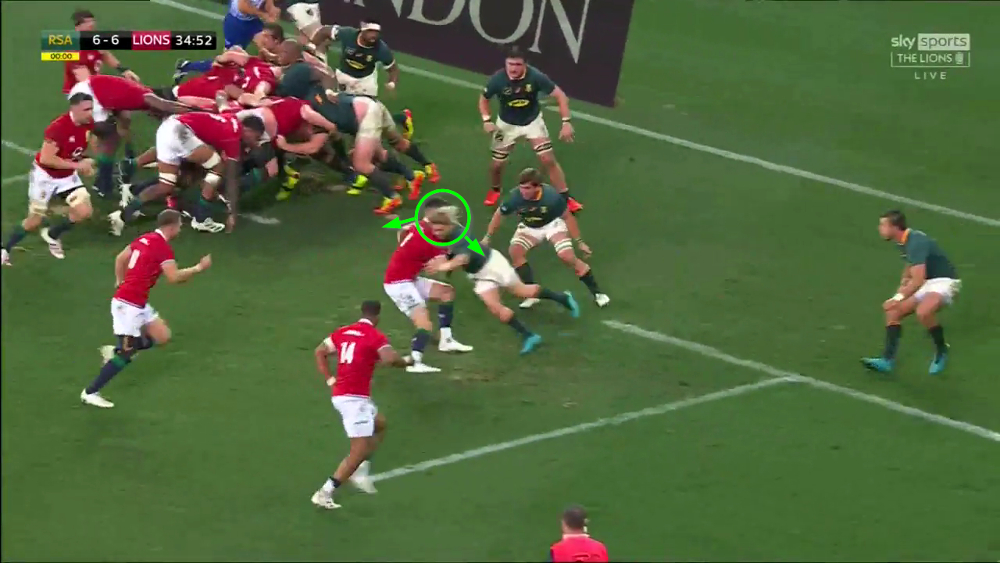 De Klerk’s head is at the same level as Murray’s when contact occurs and there is no serious attempt to wrap with the arms. The review of this incident by the officiating crew could be (politely) described as cursory.

In the second half, De Klerk then launched himself like a missile at Lions’ left wing Duhan van der Merwe.

The stream of high challenges was one reason for the mountain of stoppage time during the game. The last one occurred only five minutes from the end.

At least Franco Mostert tries to bend at the hips as he homes in on Owen Farrell, but he is still looking away from the target as his left shoulder flirts with Farrell’s head and neck.

The assault on World Rugby’s law amendments was intensified further at the post-tackle. The cardinal point is as follows: “Tackler (Law 14): 14.5 – must a) Immediately release the ball and the ball-carrier after both players go to ground and b) Immediately move away from the tackled player and from the ball or get up.”

It was here that the habits O’Keefe has picked up in Super Rugby Trans-Tasman really benefited the Boks.

There is no release by Makazole Mapimpi after he makes the tackle on Biggar. It was a repeated theme. 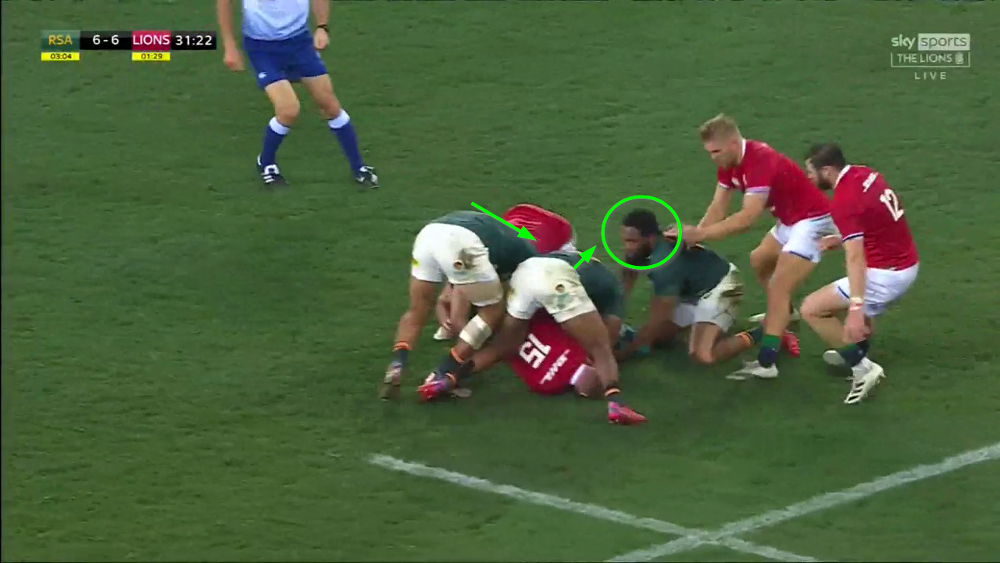 This situation would be familiar to followers of Trans-Tasman. The assist tackler (Mapimpi) never obviously releases the ball-carrier and the primary tackler sits directly in the path of the cleanout by the Lions’ support players.

The major plank in South Africa’s defence after a tackle is made is ‘no clear release’.

Most of the refereeing latitude was directed towards the defender, not the attacking side. 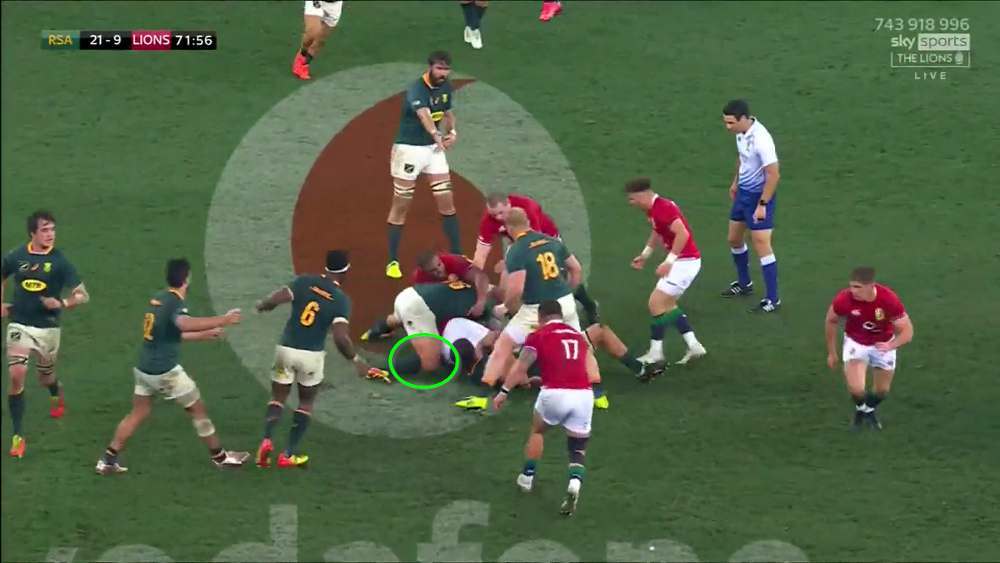 Malcolm Marx has clearly dropped one knee on to the ground in order to avoid the cleanout, but is nonetheless allowed to get back on his feet again and steal the ball.

New Zealand and Australia have always played the most constructive football of the professional era and been at the forefront of law changes that favour attacking play. It is time for them to do so again, and insist that the 2020 law amendments regarding tackling technique, and the production of quick ball at the breakdown are respected.

They would receive the support of the English Premiership clubs and referees, and that of the big European luminaries like Leinster and Toulouse. They are all headed in the same direction.

Rassie Erasmus won his battle with both the British and Irish Lions and, more importantly, World Rugby last week. His social media rant went unchallenged and that passed all the pressure back on to the officials for the second Test. They responded with a glut of penalties, yellow cards and stoppages in play.

More importantly, Rassie’s Springboks have thrown down the gauntlet to World Rugby in relation to their guidelines about high or dangerous tackle techniques, and release of the tackled player after a tackle is completed.

It is up to rugby’s governing body to screw its courage to the sticking place, and insist its officials implement its vision of the game for the future now. The current series does not provide a realistic model for either player welfare, or the good of the game as a whole.

Rassie won the battle, but he must not win the war.