If I was as unreliable at my job as the NRL’s referees, I’d be in the Centrelink queue.

The huge crackdown on contact with the head that we saw during Magic Round seems to have disintegrated and now referees are seemingly making up punishments as they go.

An automatic send-off earlier this year can now vary between a send-off, a sin bin, on report, just a penalty and, in some instances, absolutely nothing.

Two identical passes can be called forward or fine. A knock-on in one game is deemed back in another. Depending on the referee, a legal decoy run for players has now turned into a magic trick of ‘let me make myself disappear’.

And it’s not just the calls on the field that are all over the place. That glorious mystery known as the Bunker seems to just flip a coin to decide whether to award a try or not. 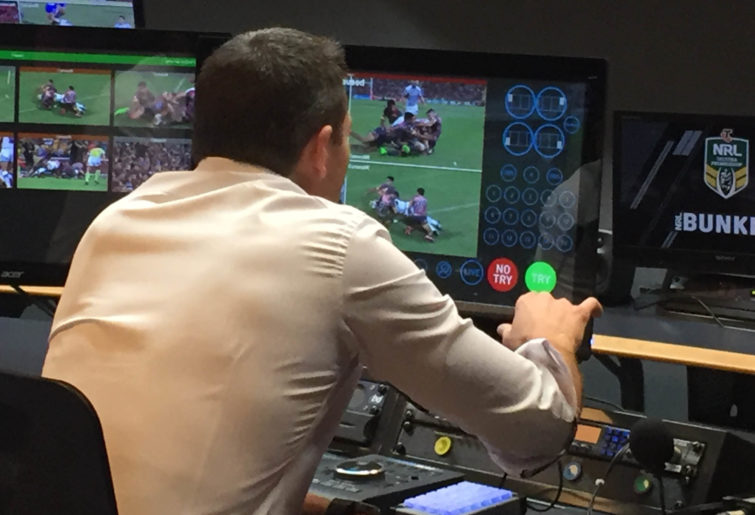 Incorrect calls can have a massive impact on the season. It can determine where teams finish on the ladder, be the difference between a team making the eight or not, or even whether a player is eligible to play.

In the last two rounds alone, we have witnessed some real head-scratchers.

Last weekend between Brisbane and Penrith, Thomas Flegler hit Isaah Yeo flush on the chin with a swinging arm, knocking the latter out cold. A penalty was given to the Panthers and Flegler was put on report and sin binned. Yeo didn’t return for the rest of the match and missed the clash against the Storm this past weekend.

Commentator Braith Anasta agreed with the sin binning, saying that “it wasn’t intentional”.

In the post-match interview however, Ivan Cleary said what the rest of us were thinking:

“It’s an illegal act, that’s why he got sent to the sin bin. I don’t know what you have to do to get sent off,” the Panthers coach said.

“If it was Magic Round, he would have been sent off.”

Then we had the Manly vs Wests Tigers match from the same round, where Josh Aloiai performed a cannonball tackle to the knee of Tigers prop Alex Seyfarth.

The referee admitted that the contact “was unnecessary and dangerous”, but only gave a penalty. No time off for Aloiai. Meanwhile Seyfarth limped from the field and will now miss several weeks after tearing his medial collateral ligament.

“I don’t think he intentionally wanted someone to hurt their knee,” he said.

It seems many referees think the same as Anasta and DCE – that intent defines the punishment. It shouldn’t matter if it was intentional or not. That has no impact on the fact that it happened, it was illegal, and should receive the same punishment week in, week out.

When the Bunker first came into the game, I was excited. I thought finally, with a play being reviewed from so many angles, we wouldn’t have any more wrong calls.

Many decisions that have come out of the Bunker this season have made my brain explode. When something is sent upstairs, the replay is apparently watched a million times – in normal speed and ‘super slow mo’ of course – just to validate their time sheet.

And then half the time the ruling doesn’t match what we have just been made to watch over and over again.

We had two tries last weekend with almost identical finger-to-ball ratio – but of course one was given and the other denied.

Kyle Feldt ‘scored’ another try on Friday night that was awarded on the spot. But after it was given, reviewed, given again and then checked once more for good luck, it was eventually denied due to separation.

There is so much talk about separation during Bunker rulings, I feel like I’m in divorce court.

Then on Monday night, Jason Saab scored a try with what looked like the same downward pressure as Feldt’s. Based on the no-try call from Friday night I thought it would not be given, but after it was looked at from all sides, it was awarded.

The game can’t keep going like this. We need to know that basic rulings are going to be the same in every game. That the consistency of calls will flow.

I’m sure while you are reading this, you are having flashbacks about a bad call that your team has been given this season. It may have affected the outcome of that game, as well as where your side now sit on the ladder.

I just hope we are not having this conversation again in October because a wrong call decides the grand final.