'To be the best we have to beat the best': USA semi-final showdown awaits

Many predicted the quarter-final against Argentina to be a close encounter. And for ten minutes, it looked like Argentina had a vice-like grip on the Boomers as they led 22-18 at the first break.

But a 21-11 second quarter in favour of Australia swung the match and from there, the game was played on the Aussies’ terms with stingy defence and team-first play that broke the backs of Argentina.

Over the course of three quarters the Boomers wore them down, scoring 79-32.

The 38-point win over Argentina, who are ranked fourth in the world according to FIBA, was their biggest victory in Tokyo.

“We’re not thinking too far ahead,” he said post match. “We’ve had one goal all along and that’s to win a gold medal. We’ll get prepared and be ready for that game.” 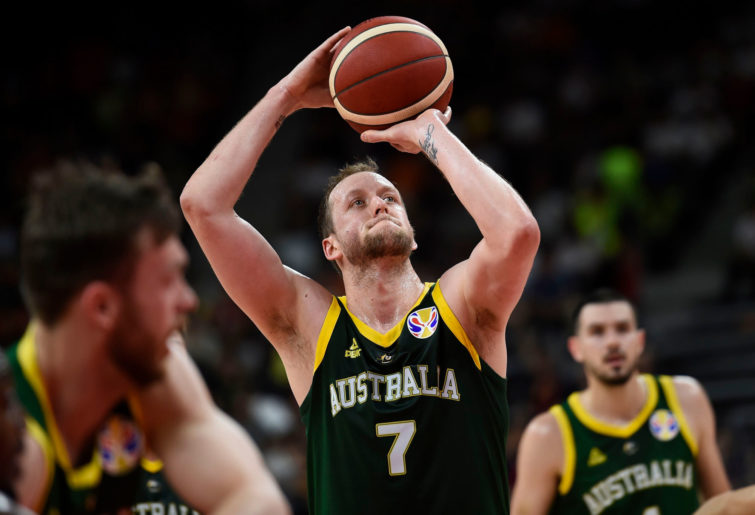 The scoring load was shared across the roster, with seven players scoring eight or more. Patty Mills finished with a game high of 18 points and shot three-from-four triples.

Matisse Thybulle hit the scoreboard with 12 points, three triples and continues to be a defensive weapon with five rebounds and three steals. Jock Landale was busy with 12 points, seven rebounds, five assists and two triples.

When the game was well and truly iced, the Boomers rested some of their core players to give guys like Josh Green, Nathan Sobey and Chris Goulding time on court. Sobey scored eight points, with two triples in eight minutes, while Green and Goulding finished with six each.

In a touching tribute for Luis Scola, who is retiring after five Olympic campaigns, when he checked out of the game for the last time, all players, coaches, officials, gave him a standing ovation.

Scola got into foul trouble early, missed most of the third quarter on the bench and finished with seven points. Argentina couldn’t give him the classic fairytale ending with a medal, but the 41-year-old ended his career on high note, averaging 19.7 in Tokyo.

The 97-59 Boomers win has now set up a semi-final bout with the USA, a team smattered with All Star talent. They have steadied after some teething problems – the Tokyo opener loss to France and some ordinary performances in the Olympic warm-up matches. The Boomers beat the US in a warm-up match in Las Vegas 91-83.

Since the seven-point shock loss to France, Team USA have demolished Iran (ranked 23rd) by 54, and the Czech Republic (ranked 12th) by 35.

Against Spain though, who are ranked second in the world by FIBA, after being 43 apiece at halftime, they outshot them 52-38 in the second half and looked to have hit their straps.

The Boomers will need to figure out who gets the job on dominant Nets forward Kevin Durant. He’s dangerous anywhere on the court — inside the key, outside the arc.

In Tokyo, Durant has posted scores of 10, 23, 10 and 29. Ingles could match up well on him, given he’s 6″8, compared to Durant’s 6”10 frame. Even at 6″5, Thybulle is another option, given his athleticism, wingspan of 2.1 metres, and his proven ability in the NBA to make stops and disrupt play. 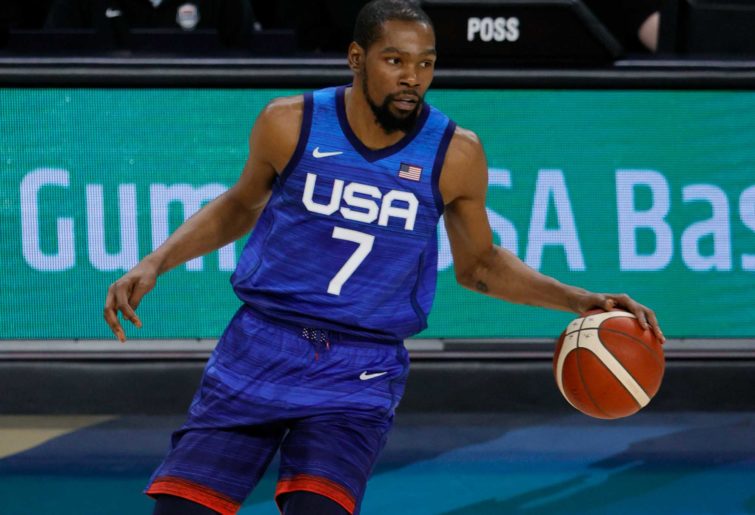 But Durant is just one beast to consider. The luxury that Team USA have, is that they are a machine put together with excellent, elite parts.

If one gets cold they have someone else they can throw on court to get the job done.

In the post-game analysis, Olympic basketball legend Andrew Gaze reflected on the Boomers’ depth and how much the players have bought into a team-first system that cares less about beautiful numbers and more about wins.

“Now they [the USA] are beyond talented. It’s ridiculous how much talent they’ve got and it’s a tough, tough assignment,” said Gaze.

“Right now we go 11 deep and there are guys on that team who aren’t seeing a lot of time, even someone like Chris Goulding, but there are no dropping  of lips, no sooking about ‘I want to play’. It’s all about getting the medal. That’s what it’s going to take.

“If you saw the United States, and you don’t really know when you’re commentating the game, but there were a few interactions with Gregg Popovich and the players and it didn’t have the same level of camaraderie.”

Without Baynes, the US will be looking to exploit Australia’s lack of tall depth. They’ve got gritty talls with big bodies like Bam Adebayo, Draymond Green and JaVale McGee. The Boomers will have to crowd the key – like they did against Argentina – and get a spread of help defensively to minimise this gap.

This has been a void the Aussies have filled since Baynes’ last game against Italy. Their back-up plan has worked against Germany and Argentina but will it work against the USA?

“Based on what I’ve seen and the defence Australia is playing and how we’re a little more organised on the offensive end with our structure, it is not some fanciful, ridiculous thing to say that we are a very good chance to cause an upset,” Gaze said.

If you were watching Ricky Rubio’s 38 points against the Americans, the Spaniard was able to use effective screens to break away and score. Mills should watch that tape so he can pull off something similar. But if Team USA do a proper lock down on Mills, the Boomers will have to rely on guys like Ingles, Goulding, Kay, Landale, Exum to pick up the slack.

Mills knows that Australia’s greatest challenge lies in front of them. If there’s anything to takeaway from the Olympic campaign to date, it’s that they’ve embraced the team-first ethos and rely on every player on the roster to play a role and get the job done.

“Tonight showed the belief in each individual in our team and how tight this group is,” he said. “It’s been a long couple of years to be back to this point. This is a challenge we have prepared for for a long time there is only one thing we are focused on and we have to get it done.

“For us to be the best we have to beat the best and we have that opportunity in front of us now to do that.”