Are the Suns headed for the wooden spoon?

If a week is a long time in footy, then the past three weeks have been an eternity for the Suns as they have fallen from the lofty heights of defeating both of the 2019 grand finalists in successive weeks to losing to three premiership fancies.

Now anchored to the bottom five, teams that were long since consigned to losing seasons have been catching up and going past them, with only a win-and-a-half separating the Suns from the last-placed Kangaroos.

North Melbourne’s resurgence has been more impressive in terms of how they have recovered from weekly floggings to winning four and drawing one from their past 11 games. The Shinboners play Richmond next, then Sydney and Adelaide, which could get them off the bottom of the ladder.

The Crows are just 1.2per cent behind the Suns and have an interesting road home, starting with a Showdown this weekend, then the return match against a Demons team who they overran earlier this season, with what could be a live battle with rival North to avoid the spoon or hand it to another hapless club.

The unhappy team at Hawthorn are relishing their chance to let their footy do the talking as the media noise has been deafening about their coaching dilemmas.

But they lose all the games they should win and do the opposite to highly fancied opponents, so they will probably lose to Collingwood, beat the Bulldogs and, one way or another, get the Ninthmond discussions happening by the final round.

Collingwood has won four and lost four since the start of June, yet despite not losing a single game by more than 30 points and two of their 13 losses coming by a solitary point, they were never going to run the table and pinch eighth place.

It isn’t to say that they can’t win their final three games against the Hawks, Lions and Bombers, even if their only reward is to push the pick they traded to GWS back as far as possible.

The run home for the Suns is fraught because at the time of writing all three opponents are live finals chances.

Gold Coast could end Carlton’s season this week, but the Blues will be planning to launch their campaign for an elimination final berth with a win.

Essendon may score home advantage from the Suns as the lockdown gets extended, while the last match against the Swans could be transferred further north.

What is wrong with the Suns?
Nothing. The simple explanation for the last six quarters of footy they’ve played is that the toughest players in the team have been falling to injury and the side that faced the Demons was one of the greenest put on the park in years. 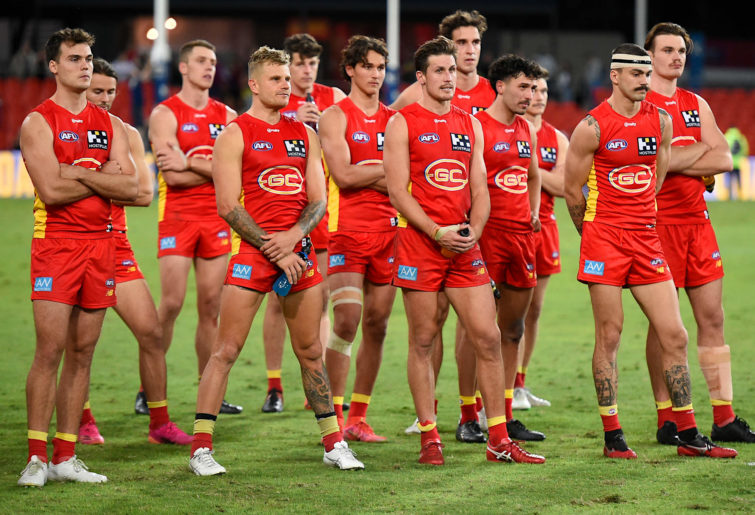 Nearly half of the Suns best 22 was out injured, or 1217 games of experience, which is huge considering the entire named side only had 1377 games experience all up.

There were other mitigating factors such as the scheduling, which while it affected Melbourne having to spend eight hours in transit on Saturday, they slept in their own beds that night.

Whereas, the Suns players went from sitting in the grandstands at Metricon watching the VFL to racing home to pack for an indeterminate amount of time on an unscheduled flight in accommodation booked at the last minute.

The Gold Coast players ate dinner at 10pm, were still getting COVID tested after midnight and in the chaos of the dash to escape lockdown, luggage went missing and many club staff did not travel.

To cap it off, the AFL rescheduled the game to start at midday. How is that for a turd sanga?!

A more long-term issue for the Suns in terms of their list is player development. More specifically, the lack of opportunities for players outside the match day 23 to get on the park this season and last season has seriously impeded the growth of young players.

In 2020, with the NEAFL cancelled and AFL season prorogued, the clubs came up with the solution of scratch matches, yet these were played at well below match intensity and often the Suns had to loan players to the opposition just to get enough players on the ground.

Then, in 2021, the AFL delayed the beginning of the VFL season until the middle of April, coinciding with Round 5. The Suns have played ten-and-a-bit VFL games, with Saturday’s game called off in the middle of the first quarter, while the AFL has completed 20 rounds of footy.

With VFL byes, games cancelled and the late start, none of the Suns players coming from the VFL side are match fit or developed enough to play at AFL level.

Club morale
With two bad quarters against the Lions marring what had been a solid opening half of Suns brand footy, players and officials could take heart in the 14 quarters preceding where the playing group announced to the competition that they were out for big scalps.

Then came the demolition at the hands of a Demons side battling form issues and in need of both a win and percentage to keep their top-two hopes alive. As Stuart Dew said, they are hurting, but it’s not fatal.

The injury factor
This column warned in the preseason that the Suns were exposed for ruck depth and the prophecy came true in the worst possible fashion when main ruckman and co-captain Jarrod Witts went down in Round 3.

But the hardest hitting injuries lately have been to the hardest-hitting players in Brandon Ellis, Hugh Greenwood and Nick Holman, while the team’s fastest players, Oleg Markov and Lachie Weller, have also missed.

Where is the cavalry?
Ellis and Sam Day will likely return to the side to face the Blues, with Markov a further week away and Weller in continued concussion protocol.

Forgotten off-season recruit Jacob Townsend can’t get a run at it, only notching six VFL games, but Rory Atkins is a ready replacement should changes be required.

After that, it’s slim pickings. If the club decides not to send Academy kids to Melbourne, the VFL side will have to borrow NAB League kids again and get flogged.

Play the kids?
The club has used 36 players this year, giving debuts to their pair of Northern Territory recruits, Mally Rosas and Joel Jeffrey.

With a list of 50, there are ten yet to debut, so look for the electric Elijah Hollands to get a guernsey if his brief resume of three VFL games is enough to warrant selection, while Alex Davies is the closest to a debut with his clearances and tackles a feature of his inside game.

A smoky for a debut is the smallest Sun on the list, Hewago Oea (AKA Ace), with the PNG native playing his third season of reserves for the Gold Coast.

Trade and draft period
The end of the road has come for Jack Hombsch and Jordan Murdoch, the former due to some terrible injuries over a ten-year career and the latter having to make way for list space, while Jarrod Harbrow might score a testimonial game and shift into coaching with the possibility of being a top-up VFL-only player in 2022.

Zac Smith faces losing his spot due to the need to develop mid-season rookie Ned Moyle and the return of Witts, while a number of players will come onto the rookie list whether through pre-drafting or re-rookied primary list delistees.

Whatever the strategy leading into the draft, Craig Cameron must bring in best 22 standard veterans to shore up the depth in the playing list.

A ruck-forward, a key defender and a big-bodied midfielder could make the difference between finals and also-rans.

There is some quality in the Suns Academy that will be fantastic in 2025, but getting some readymade players is essential.

Final word
Rowell came back underdone, Rankine is in reserve grade, Lukosius can’t kick set shots at goal, Ben King’s goals have dried up, the defence is stout but missing a lockdown specialist, the delivery inside 50 is still not effective enough to post high enough scores and the kids are being outplayed by men.

These are fixable problems to have, especially with a proper preseason that begins after a proper off-season break.

The players will shrug off the Demons game and bounce back against the Blues.

The coach is safe and the club is patient. The fans are sick of losing, but it just makes winning all the sweeter.