There are many cracking games to keep an eye on for neutral fans in August’s Round of 32 FFA Cup fixtures, and none more so than the all-Queensland clash between Peninsula Power and Brisbane Roar.

Although their initial roots go back over 70 years, the Peninsula Power Football Club only formed in 2000 through a merger between Redcliffe City and Margate.

For a club that has officially been around for barely 20 years, they are very successful – with several trophies won in the past decade.

Aaron Philip is the manager and has a near 30-year history with the Peninsula club as an ex-player as well as coach – he is the mastermind behind the club’s meteoric rise since taking control in 2016.

The Power are not only the best team in the QLD NPL, they are the best NPL side in all of Australia this season.

They currently lead the league by a whopping eight points, as well as having three games in hand over the team in second place.

Besides this, they boast the best defence of any NPL team in the nation, with only nine goals conceded and are the second highest scorers, with 52 goals for.

For a side to have scored that many goals in such little games played, a striker of immense skill is required – and the Power are blessed with the enigmatic talents of Andy Pengelly.

His goals-to-games ratio has always been fantastic in the QLD NPL and although his time in Singapore didn’t go as planned, there are no questions about Pengelly’s predatory instincts in the box.

The one blemish on his CV so far has been not playing in the A League – he is a player who has forever been liked with A-League clubs but never made the jump up.

At 24 years old and with his scoring powers, Pengelly will surely yet again be a name discussed between coaches and football directors around the country.

With all the attention Pengelly has been given from defences, this opens up space for other players in the team to exploit.

Joshua Wolley’s Energiser bunny-like engine has won many plaudits, as his ability to chip in on the scoresheet, with six goals and eight assists so far this campaign while playing a variety of different positions.

Sam Cronin has consistently scored goals for the Power the past few seasons and has so far racked up six this campaign, while not being afraid to stick a tackle in or do the dirty work of a midfielder.

At the other end of the pitch, 21 and 23-year-old defenders Lewis Greenwood and Luke Plummer are both names that should be high on recruiters’ lists.

Besides showing maturity beyond their young years, they bring a goal threat – three scored so far this season.

Others like Brenton Fox and Zander Guy’s contributions also haven’t gone unnoticed in a team that has standout players all across the park.

Brisbane Roar would be very familiar with this Power team as it has several former Roar youth prospects – Brendan White, Sam Cronin, Hayden McHenery and Jake McLean to name a few.

The Roar know this power team very well and I would fully expect them to field as close to their first XI team as possible when they face each other.

Anything less would be a sign of arrogance and the last thing you want to do is disrespect the best NPL team in Australia this season, as they have the power to dismantle teams. 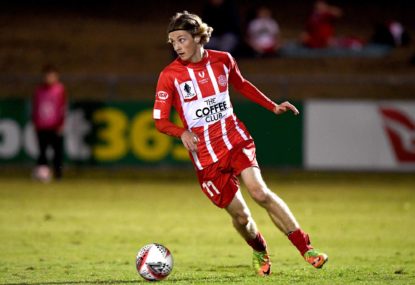