The Melbourne Storm are simply the benchmark of the NRL and have been for over a decade.

They have it right from the inside out and it shows in their dominant performances week in, week out.

From the savvy staff deep within the club to the raw talent and Craig Bellamy-trained stars we see on our tellies, the Storm have nailed what it means to be a diligent and powerhouse NRL club.

We can break down Melbourne’s success into four categories: recruitment, morale, staff and leadership.

Frank is the pinnacle of attracting success. He is arguably one of the best ‘string pullers’ and sports business people in Australia. Frank has worked across the globe, including France and South Africa, working within rugby league and has powerful connections and an expansive knowledge of the game.

Now, he is the general manager of the Storm and has signed a new contract to bring his time in Melbourne to 18 seasons. Ponissi has been instrumental in some big name signings as well as the retention of NRL icons.

Frank was significant in the process of recruiting big name players such as Greg Inglis but also in the retention of the big three. 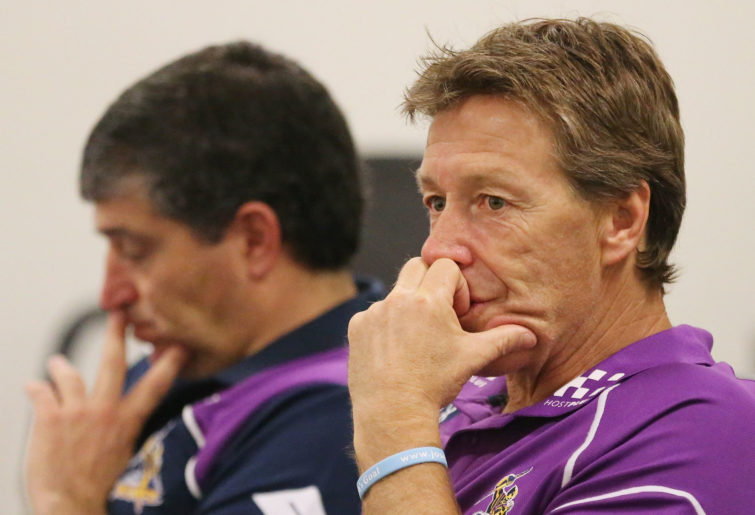 Bellyache, who is now considered to be one of, if not the greatest coach of all time, has been the pinnacle and key to success for the club itself, in particular the recruitment.

Pair this with Craig Bellamy, and players are lining up to join the Melbourne Storm.

On Denan Kemp’s Bloke in a Bar podcast, as well as on Uncensored by Brett Finish, Finchy claims Melbourne are the “kings” of NRL recruitment, having taking Brett on a tour of the club, meeting the big names such as Cooper Cronk, Cam Smith and Billy Slater, leaving him starstruck and desperate to join the team, followed by a contract signing at Melbourne’s elite strip clubs.

Finchy says you’re “starstruck” and “they butter you up so you just want to sign”.

Morale
Morale at the Melbourne Storm is something that other clubs should study.

Players who are initiated in the Storm program rarely want to leave, due to the club’s success, team camaraderie, family-friendly community and hierarchy structure.

Recently, clips surfacing on social media of the boys playing funny buggers with Bellyache on the bus after a 30-point thumping, or Brandon Smith putting rocks in Craig’s bag give us a good indication the spirits are high.

It’s highly agreeable that when spirits are high and the boys are laughing, it can translate to a good, team-driven performance the following night.

Finch claims Melbourne often throw family events and lunches to bring the team closer together, while Bellamy walks around and chats to all the wives and kids. Say what you want about Melbourne, but they have it down pat.

You can catch Craig throwing chairs in the coach’s box when Melbourne concede one try against their 13 scored, but he is undoubtedly a humble family man who has been largely responsible for giving Storm the reputation of a family-friendly, community club.

Bellamy has taken the Storm to nine grand finals since he began his reign and maintained an incredibly high standard throughout the club since.

Add Steve Kearney as Bellamy’s right-hand man and as mentioned, staff like Ponissi in the offices – the Storm hierarchy and board are a well-oiled machine.

Leadership
Having already mentioned the significant staff and their role within the club, let’s talk about previous players who have been the head honchos and the ones the young blokes look up to when they walk in.

Smith, who has won it all with Australia, Queensland and Melbourne, mentored many Storm players coming through and inspired players on and off the field. He is the most decorated player in league history and a born leader.

Which brings me to my next two blokes, thus completing the ‘Big Three’, Cronk and Slater.

It goes without saying that the key reason behind the Storm’s constant standard of success was this core of Cameron, Cooper and Billy, who were all arguably the greatest of all time in their respective positions.

Slater has been and still is mentoring Ryan Papenhuyzen and evidently shaping him into one of the best fullbacks in the league.

Pair this with Cronk, who has been seen at Melbourne’s training once or twice, setting the benchmark for over ten years at Storm as how a halfback should be. A leader, a talker and an organiser.

Cooper notably moved to Sydney and won two consecutive premierships with Easts. If you’re after proof that Cronk is a leader, he remained on the field with a broken shoulder blade, clutching his upper arm, all while pulling the strings in the Chooks’ GF win over his old side in 2018.

Breaking news surfacing in recent days – Bellamy has re-signed as coach for five more years, with an option to move into the Head of Football position.

In 2021, Melbourne are favourites to take out the premiership, having now won 18 games consecutively and perched in fist place.

When do you see Melbourne’s success falling?