What Hooper and Rennie said about Jordan Petaia, Eden Park and Quade Cooper ahead of the Bledisloe Cup

Jordan Petaia’s on the wing and Marika Koroibete is not for obvious reasons.

Quade Cooper’s role at training appears to be as a spiritual leader, youth worker and clone of All Blacks No.10 Richie Mo’Unga.

» REPORT: Mo’unga magic gives Game 1 to All Blacks
» WATCH: Did Retallick get away with dodgy cleanout?
» Bledisloe Blog: First Test, as it happened

These were some of the takeaways from today’s press conference with Wallabies coach Dave Rennie and captain Michael Hooper ahead of the first Bledisloe Cup Test at Eden Park on Saturday.

Oh yes – and the All Blacks back three, particularly diminutive fullback Damian “Big Jim” McKenzie can expect an aerial bombardment.

On Koroibete and fellow non-selections Pone Fa’amausili and Isa Naisarani – who broke team protocol by following a team drink with another one in their room – Hooper was asked were some in the Wallabies squad still angry with the trio.

Hooper replied that he’d “had conversations and we’ve moved forward with it.”

“That’s all we can do. I won’t add anything more … People will make mistakes and we understand that. And we move on and play our game and try to play our best rugby, that’s for sure,” Hooper said.

Rennie added: “In the end they’re good men who made a poor decision. They’re paying a price and working hard to earn trust and respect and showing that through their behaviours. And they’re doing that.”

Rennie appeared genuinely sanguine about missing the Wallabies’ most dynamic back in Koroibete.

“It is what it is. He had a really strong French series. And he was one of our best last year.

“But we played 75 minutes without him last Test. We’ll do 80 this week,” Rennie said.

In his place comes Petaia who looks like a quality addition for the Wallabies out wide. Rennie said the Queenslander had trained well in the weeks leading up to the French series but they wanted a few more weeks of training into him.

Asked was there consideration to play Petaia in the centres, Rennie deflected, perhaps to spare the feelings of the selected ones Hunter Paisami (12) and Len Ikitau (13).

“We like [Petaia] as a winger, too. He’s very good aerially, good kicking game, bit of a handful out wide. Very good defender. Pretty simple choice to put him there,” Rennie said.

Elsewhere Andrew Kellaway has forced his way into the starting XV after Filipo Daugunu’s arm injury and tidy cameos off the bench against France. Lachie Swinton (ankle) and Nic White (MCL), however, are likely to be available for the following weekend’s Bledisloe Test.

Cooper’s appearance at Wallabies training was unexpected and raised eyebrows in Australian rugby. Asked if the 33-year-old was a genuine option to play in a Test after this one, Rennie didn’t say he wasn’t. But he didn’t say he was, either.

“Quade’s been excellent, as we hoped. The conversation I had with him about him coming in, he’s delivered on all of that. He’s been a really positive influence, talking with Noah [Lelesio] all the time, talking about various options.

“I’ve spoken to him about that fact he’s not just here to help Noah and give us a training number. He genuinely wants to pay more Test footy. And yeah, I have no doubt that’s a possibility,” Rennie said. 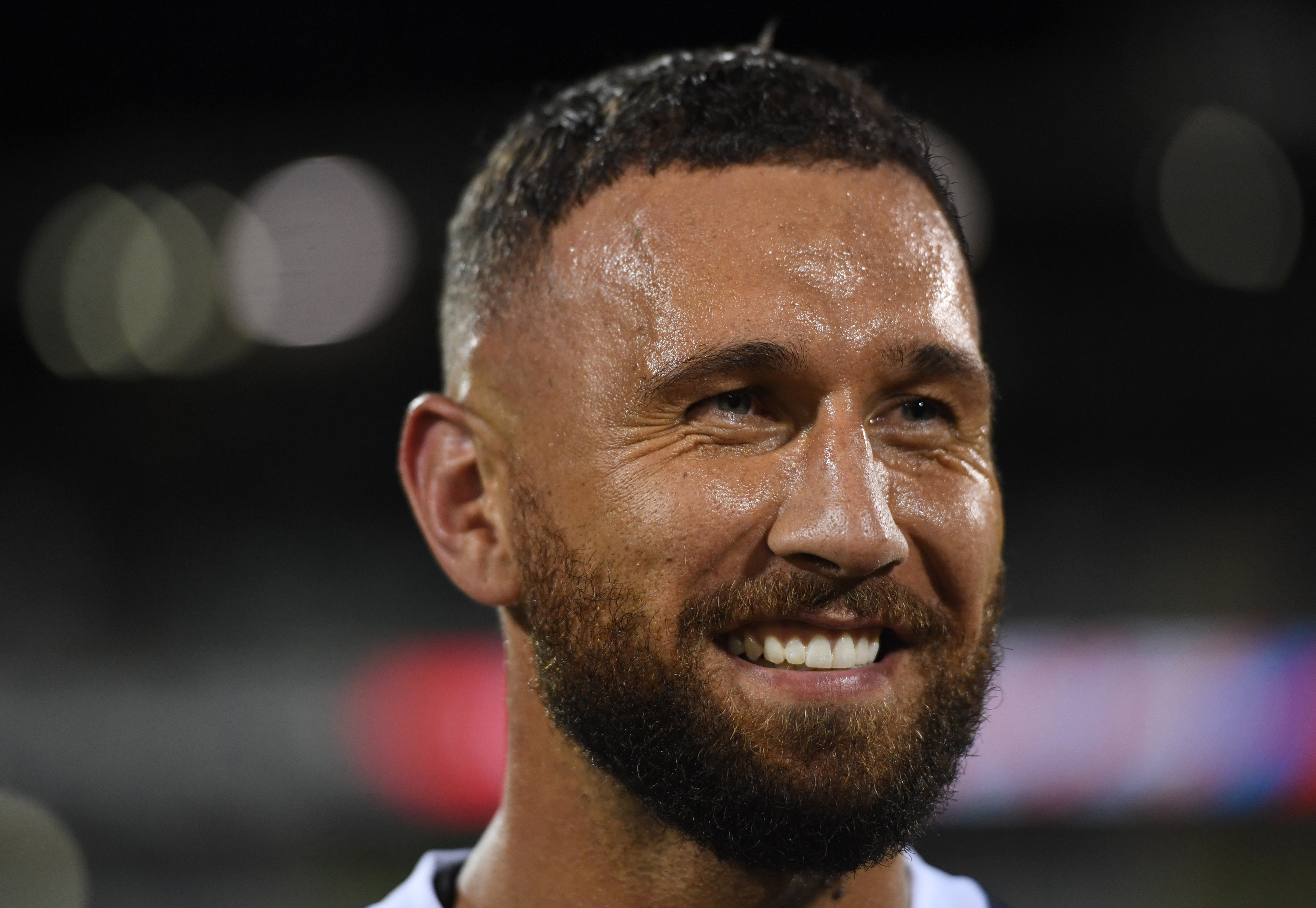 Hooper said Cooper has “still got a cracking cut-out pass and his touch with his kicking is outstanding. His partnership with Noah’s been nice to see. He’s sharing information. And backing up what Dave said, he’s been a great influence. And it’s good to have him around,” Hooper said.

Yet it’s Lolesio who’s being groomed as the long-term No.10 for Australia. Rennie said the promising colt is getting “better and better.”

“His kicking is exemplary. More than happy to put him out there again. He’s trying hard to grow his game management and the skills around that. He’s only a young man but he’s making big strides and feeling a lot more comfortable at international rugby,” Rennie said.

There is no greater cauldron – nor graveyard – for international Test teams than Eden Park. Australia last won there in 1986, thirteen years before Lolesio was born.
Hooper declared that that’s a plus. Or could be, anyway.

“Let [the younger Wallabies] feel about it how they want to feel about it. If that’s all positive, happy days. It’s great to have that attitude – ‘I just want to pay rugby, to show what I can do on this stage’. And what better stage than Eden Park,” Hooper said.

Rennie was asked: “How far is Izaak Rodda from your top 3 locks?”

On the All Blacks squad, Rennie said it was “predictable” and that his friend McKenzie could expect no favours.

“Obviously got a lot of time for Jim. But yeah we’ll be doing whatever we can with that back three. They’re not the biggest in world rugby. Damien’s historically been fantastic under the high ball. But he’ll get a bit of practice on the weekend,” Rennie predicted.

Though Naisirani is stood down Rennie said Harry Wilson would’ve started in the No.8 regardless while Hooper is on the side and Rob Valentini starts in the No.6 for Swinton.

Asked to “sell” the Wallabies as a chance to beat the All Blacks at Eden Park for the first time in 25 years Rennie said his team had shown a lot of courage and never-die-spirit this year.

“We had our backs to the wall and found a way to win.

That’s really important against this All Blacks side; you’ve got to be prepared to play for 80 minutes. Many a side has been in the game for 60 minutes but been blown away. They’ve got a quality bench.

“But we’re pretty happy with ours, too. We’re often talking about a team that Wallabies fans and Australians want to get behind. We think they do. But we’ve got to give them performances they can believe in.

“And there’s no better place to do that than Eden Park,” Rennie said.