Although this was an impending inevitability, the announcement that Valentino Rossi will retire from grand prix motorcycle racing at the end of this year still tears through me with a sense of deep emotion.

The immortal legend of ‘the Doctor’ will finally conclude come the close of the 2021 MotoGP season, having declared ahead of this weekend’s Austrian Grand Prix: “unfortunately this will be the last season as a MotoGP rider”.

A most decorated 26 seasons have seen the 42-year-old scale the dizzying heights on grand prix racing on two wheels, achieving a mammoth 115 victories across 414 race starts of which 89 are in the premier class.

It is the nine world championships however that stand above the rest in the modern era, including the seven in the premier class for which Rossi cemented his legend, starting back in 1997 with a 125cc title to the Italian’s most recent championship victory in 2009.

He pioneered as well his famous post-race celebrations, which went on to spawn countless imitators and build the identity that is ‘the Doctor’, making the fluorescent yellow number 46 synonymous globally with the Valentino Rossi brand and persona. 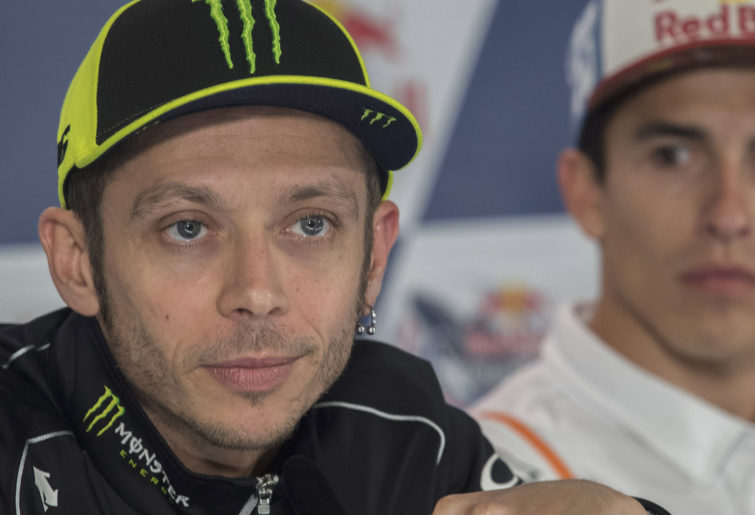 The early days of Rossi’s 500cc/MotoGP career will always be remembered for his crushing of the opposition to announce himself on the world stage, destroying the likes of Max Biaggi, Loris Capirossi and Sete Gibernau for three straight titles with Honda, before ‘the Doctor’ made the switch to Yamaha in 2004 to win a further two championships.

Yamaha during the early 2000s were far from the force that they’ve become in MotoGP and Rossi’s arrival in 2004 along with long-time crew chief Jeremy Burgess sought to turn the Japanese manufacturer into a juggernaut to dethrone Honda.

The fact that Biaggi moved to Honda in 2004 with the impression Rossi could be beaten was also laughable and only highlights the genius of the nine-time world champion and his dedication.

Though by the time Rossi rolled into his sixth consecutive title defence in 2006, a new breed of rider was out to dethrone him. The young brigade, which included two-time MotoGP champion Casey Stoner and Dani Pedrosa, had emerged while an epic Yamaha versus Honda battle saw ‘the Kentucky Kid’ in Nicky Hayden end Rossi’s streak of championships.

These youngsters were immune to the psychological damage that Rossi inflicted upon Biaggi and co. Though this is where the Italian’s greatness came to the fore, as it forced him to step up to a new level to fend off this latest challenge to his throne.

Stoner and Ducati weaved a fairy-tale campaign in 2007 to win their first championships in MotoGP, with Rossi finishing a distant third in the standings before the pair locked horns the following year only for ‘the Doctor’ to return to his winning ways for a sixth premier-class title.

The pair’s flashpoint at the United States Grand Prix at Laguna Seca created a memorable moment, with Stoner in the post-race press conference famously stating that Rossi’s “ambition outweighs his talent”. This was after the Italian’s contentious move for the win at the wild corkscrew corner.

Little was it known that 2009 would be Rossi’s final championship victory, having now faced the threat of his teammate in a young Jorge Lorenzo.

The most fascinating part of the Rossi-Lorenzo rivalry was the intensity and shockwaves it caused within the Yamaha camp. Matters escalated to the point where a wall was erected within the same garage as both riders sought to take their own individual glory.

It was the experience of Rossi that saw him triumph however in that amazing season. There was the epic duel in Barcelona, which the pair famously battled until the final corner of the final lap to decide the winner of the race.

It was moments such as that throughout Rossi’s career that have left many in awe and screaming at the edge of their seats. It has made ‘the Doctor’ the enigma he is.

Retrospectively, it was enthralling again to see Rossi at his best in 2015 when he battled with Yamaha teammate Lorenzo again for the championship following of course two dire seasons at Ducati to emulate Stoner’s success, while the Australian and Lorenzo split titles between for Honda and Yamaha, which then ultimately lured Rossi back to the Iwata factory in 2013.

Five points was the difference between Rossi and the chance to equal his hero in the great Giacomo Agostini for most premier class crowns. That was lost amid controversy at the penultimate Malaysian Grand Prix following a run in with MotoGP’s new dominator Marc Márquez.

Controversy was something that Rossi’s career hasn’t been devoid of, but in ways that have enriched all the great rivalries that he has had, even with 28-year-old Márquez, despite not having had a season-long championship battle. Although they have shared some fierce wheel-to-wheel duels during the mid-2010s.

It is perhaps the lack of the rivalries and jaw-dropping battles that in recent years has taken the sheen off such an illustrious career, as painful as it is to admit. Rossi has been winless since the Dutch TT in 2017 and has not stood on the podium in over 12 months.

Even a change to the satellite Yamaha team in 2021 to prolong his career and the addition of a new crew chief in David Munoz to replace Silvano Galbusera has failed to rejuvenate the 42-year-old’s form.

And thus, the time is right for ‘the Doctor’ to step aside, to let MotoGP’s next generation of stars fully embrace the spotlight and for the world to reminisce in the Italian’s legacy. It is a legacy that’ll also continue to groom talent in Italy through the VR46 Academy and the soon-to-be VR46 MotoGP team from 2022.

No matter how lacking the results have been in 2021 and the fact he’s only had a single top-ten finish, the hope is still there that we can see Rossi grace the podium for the 200th and final time in his illustrious career. If not, he is still going to be the GOAT.