Four goals from Jack Higgins have helped St Kilda to a stunning 29-point win over in-form Sydney at Marvel Stadium.

The Saints’ pressure was relentless at Marvel Stadium as they bucked a three-game losing run to snap the Swans’ winning streak at five.

Small forward Jack Higgins slotted an equal career-high four goals for St Kilda, while teammate Dean Kent was next best with three in a match that the Saints increased their lead at each change.

St Kilda captain Jack Steele was outstanding, topping the possession count with 34 to go with one goal, seven tackles and six clearances.

Swans superstar Lance Franklin was blunted and was kept to two touches in the first half before finishing the game with just one goal.

With a poor percentage, the Saints must keep winning to make the finals with games against higher-placed Geelong and Fremantle in the final two rounds.

Max King, who was strong in the open stages and nailed an impressive snap in the third term in a two-goal effort, didn’t finish the match due to a groin problem.

Sydney’s hopes of a top-four finish took a massive hit but they remain a chance of securing a double chance in September with matches against North Melbourne and Gold Coast, two sides outside the eight, to come.

Trailing 50-32 at halftime, the Swans slotted the first two goals of the third term to reduce the margin to just six points.

But St Kilda rebounded with a four-goal run to open up a 76-52 lead heading into the final quarter.

They squandered a number of opportunities early in the final term as the Swans got within 15 points before running out the last three goals.

The Swans were forced into a late change when Callum Mills (achilles soreness) pulled out moments before the first bounce.

Welcome to Part 9 of my season review series, today focused on St Kilda.

St Kilda’s Jack Billings is the latest AFL star to reject free agency, signing a four-year deal that will probably make him a one-team player. 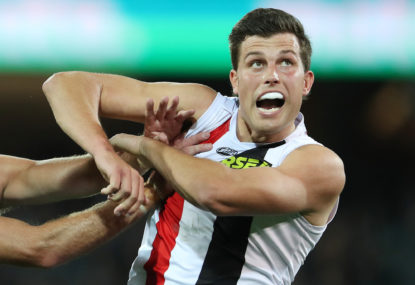