Perfect Patty: 42 points, a historic medal and the classiest interview of the Tokyo Olympics

The Boomers have created history. Patty Mills put the Boomers on his back and led Australia to its first-ever men’s basketball medal at the Olympics with a stunning 107-93 defeat over Slovenia in the bronze playoff.

Mills was ‘Patty Perfect’ – from his incredible 42 points to the emotional and stirring post-match interview where he acknowledged all those who had gone before in a 65-year quest for a medal, the present team, and the setting of a standard for the future.

At Rio they finished fourth, the fourth time that has happened in 15 attempts, and in the pain and outrage over that controversial one-point loss to Spain it seemed they were doomed to never grace a podium,

“We’ve been waiting for this moment for a long time,” said Patty Mills after the match. “It’s taken a lot of experiences, a lot of ups a lot of downs for us to get over the hump. I don’t know whether to cry, laugh, smile – a lot of emotions.”

After a heavy loss to the U.S. the Boomers’ belief was back against Slovenia. Once again they likes of Nick Kay, Jock Landale, Matisse Thybulle and Joe Ingles had to work hard on the boards without key big Aron Baynes and were able to get the job done. 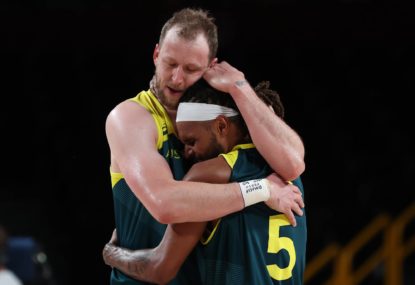 After the match when the Australians were getting handed their medals, Mills, 32, held up a bronze medal for the injured Aron Baynes.

“Us older guys we’ve been through a lot. For the younger boys they really understand what it means to be a boomer and hopefully the rest of country does as well.”

The going was tough early. Slovenia matched – if not, bettered – Australia’s production and defense. But with Mills in scorching form, Australia was able to find breathing room at the main break by eight points. The game slipped into a shootout in the second half, something that the Australians aren’t accustomed to, and Mills rose to the occasion.

Mills went 15-from-31 from the field with four triples. Analysts are calling his game a “performance for the ages.”

"I don't know whether to cry, laugh, smile, a lot of emotions."

Australian basketball legend Andrew Gaze reflected on the gravity of the Boomers winning their first ever Olympic medal.

“We’ve all been in that situation before, how badly we wanted it, and how much it means to the basketball community and the Australian community,” said Gaze.

“This country expects greatness, we overachieve. We put our blood, sweat and tears into this for providing for sport, inspiring youngsters, wanting the game to grow. The Opals have done it and now to see the men’s team do it is a historic moment.”

When the match was on the line it was the leaders who stood up. Ingles was important. He shot 16 points with four triples, with nine rebounds and four assists.

Dante Exum, who was heading toward a quiet night, shot 12 points in a hurry. Most of those came in the last quarter when the game hung in the balance. Exum went 4-from-5 from the field which included two triples.

Slovenia’s Luka Doncic, who is a triple-double machine, was subdued from a nagging wrist injury he picked up from the semifinal. He still finished with a solid line of 22 points, eight rebounds, seven assists and was Slovenia’s best player.

Former NBA player Andrew Bogut, who earlier in the day announced he wouldn’t be commentating the game on 7 only for a solution being found to their contract dispute, said: “For the boys to fly home, get on the plane to see their families. There has been a lot of sacrifice, the corona virus to come back with some hardware, all the boys and fans soak it up and let’s build on it and get the gold some day.”

Bogut was on court five years ago when the medal was ripped from their grasp in the final seconds, and likely would have been part of this team had the Games taken place on schedule a year ago, before his retirement.

If there was a most valuable player award for the Boomers, it would surely go to Patty Mills. The flag bearer led from the front on scoring from the opening tip off, scoring 25, 16, 24, 18 and 42 in the bronze medal game for 125 total points with an average of 25 and 26 total assists.

It was as if there was never any doubt that the Boomers were heading home with a medal in Tokyo. Mills had that determined look in his eye throughout the whole Olympic tournament, and his teammates followed.

“It’s our culture at the end of the day, our Australian culture, Aussie spirit,” said Mills.

“It’s the boys being able to hang together, understand what it means to represent your country, and how deep the layers go for it to all come pouring out in moments like this.

“Now that we’ve made it over the hill this is the standard. Now for Australian basketball for men we take nothing less.

“We say gold vibes only as a standard and we don’t accept anything less off the court on the court all of our preparation.”

An emotional Gaze, who dissolved into tears on Channel 7 after the game, said Mills showed the depth of his character.

“Leadership is not just the rah rah,” Gaze said. “There needs to be some substance to it. Right there you see substance.
“Tonight it’s not just about the rhetoric it’s about the form – 42 points. He said ‘get on here fellas I’ve going to guide you, give me a chop out here or there and get the job done.’

“That’s not discrediting the efforts of the other guys but when you’ve had 42 points in what now is the most important game in the history of basketball we say well done Patty and we love you dearly.”

Mills has driven a spirit of unity while making the quest for a medal personal. Mission accomplished.

“It’s time to bring an Olympic medal home, to our country Australia,” said Mills. “So I can hang it up at mum and dad’s house.”