'Breaks my heart': Netball's big push towards Brisbane Olympics, with men's comp part of the plan

Netball Australia’s bold push for inclusion in the Brisbane Olympics includes a men’s competition in the 2032 Games program.

A Commonwealth Games sport since 1998, World Netball and Netball New Zealand have already got behind Australia’s plans for the sport to win a spot on the Brisbane schedule in 11 years time.

“We think we start from a really compelling base with 20 million players across 80 countries as it is, and 1.2 million in Australia,” Ryan said on Monday.

“The AOC and IOC have a set criteria that we are yet to work through with them on what they be looking for to be in the Games.

“Those conversations start as early as today for us to understand what our commitments need to be to make sure netball is represented on the Olympic stage.

“We want our junior netballers to dream of Olympic glory … our sport deserves to be played on the biggest stage.”

While male participation in Australia is “on the rise”, Ryan said they have assumed that given the IOC’s ongoing push for gender equality in Olympic events, netball would be played by both genders.

“We would naturally assume that’s probably going to be a big part of the conversation – it’s the way the Olympics has been progressing, to get that gender equity in all sports,” Ryan said.

“They still do have sports that are more orientated to one gender versus the other at this point in but our expectation is that by the time 2032 comes around that gender equity piece will be a really strong part of the conversation.”

World Netball will lobby the IOC and expect support from other playing nations.

“All our member nations are excited at the potential of being part of the Olympic family in 2032,” World Netball president Liz Nicholl said.

“We are committed to exploring the potential with Netball Australia and ensuring that our case for inclusion adds significant value to this very special Olympic movement.”

Ryan said it would be a “lengthy process” but one they were up for.

“The early indication is that they’re still five years away from making a decision, but what they’ll see is how relentless the netball world is when we set our sights on something,” she said.

Sydney will host the sport’s most prestigious tournament – the Netball World Cup again in 2027, with 16 national teams competing. 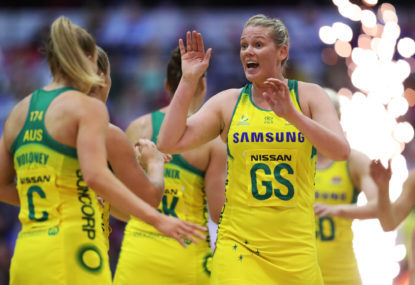 “The netball community is one million plus people who are engaged in netball each week in some way – as players, coaches, administrators, parents, fans – so that‘s a pretty big swath of the Australian community who have pricked up their ears and gone, hang on, this is a great opportunity,” Ellis said of the idea.

“It breaks my heart every four years when people ask me why netball isn’t in the Olympics, and I don’t have a great answer for that.

“Perhaps this is our moment. We’ve got 11 years to make this happen and you don’t make things happen by sitting back politely and waiting.

“The netball community needs to mobilise and I‘m really keen to be a part of that and to perhaps get our Diamonds playing in 2032 in Brisbane.”