When love came to town: How spirit of locals and athletes overcame the pandemic Games

For mine, it was the skateboarders, the little scamps, the oldest barely out of their teens. For there they were, representatives of Australia, USA and Brazil, chairing off a competitor, No.1-ranked Misugu Okamoto of Japan who’d crashed in the skatepark and run fourth.

They did it because it was right. Because it would bring solace and joy to a crestfallen comrade. Because she was their friend.

And looking on at home we the people of this virus-afflicted rock in space wiped away a tear and thought: The kids are alright. And we are going to be alright. 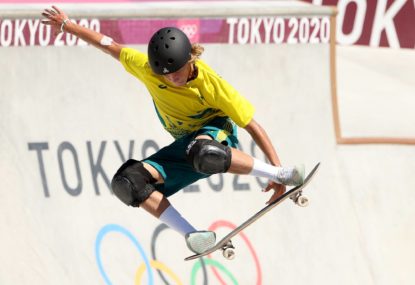 We didn’t think that before these Games of the XXXII Olympiad. Indeed we feared it could be one of those super-spreaders where one person with Covid gives it to eight people who each give it to eight people, and outwards the exponential mushroom cloud of bubble-n-spit goes until we’re all spluttering like geysers and the old people are dropping off the perch.

But that didn’t happen. Instead Japan, lovely Japan, gave us a gift, an outlet, an entertainment to take our minds away from the tedium of hanging out at home. Want a winner at the Olympics? It wasn’t the superpowers pissing for distance top of the medal tally, it was the selfless, polite and ever-gracious Japanese who couldn’t get in to see any of the bloody events themselves.

Instead they were racking up 30,000 new cases a day, lord knows how many active in the community during their infectious period. And yet still they gave us a Games. And they should get them again, and soon, straight after Brisbane in 2032.

Anyway. The Games? Well. How good for Straya? Seventeen gold medals, 46 all told, sixth on the Big List and right up there on unofficial boxing-above-our-weight, population-to-medal ratios. Perhaps only our whanau across the ditch with seven bested us there. A team of Anzacs would’ve run fourth on the gold medal list.

So there is that.

But yes, what a Games for Straya. All that gold. Yum. Don’t know what we’re going to do with it but it certainly made us feel good for a fortnight.

Yet some of the most compelling memories came from those who ran second and third – and fourth.

Old mate Peter “Spag” Bol ran fourth in the 800 metres, bested by a deuce of Kenyans and the world’s fastest Pole.

And as he tore into the last 100m, running himself ragged before being run down, he did much for the idea of Australia as multi-cultural light on the hill. Because there he was and here he is, our man Bol, broad Aussie accent, articulate and smart, a son of Africa and Australia forever. You can tear up thinking about it. Oh you, Straya.

The Matildas teared up after losing to the USA in the bronze medal play-off match but could carry themselves high onto the JAL bird to Sydney. Because how about them? Tough! Ran themselves ragged against Great Britain, Sweden and the USA, finished fourth and absolutely spent. Left it all out there. Much respect there.

In the high jump our Brandon Starc finished fifth in a hot field and went down leaping, trying to get over 2.39m. Get out a measuring tape and put it against your house. It’s stupid-high and Mutaz-Essa Barshim of Qatar and Italian Gianmarco Tamberi couldn’t get over it either.

But they did scale 2.37m and had the same number of misses. And they decided – because they could, it’s in the rules – to win a gold each. And they are now enshrined in Olympic folklore and mates forever. How very bloody good.

Elsewhere we “won” a bronze in basketball. Beach volleyball girls made the final. The men’s hockey players did too. The women’s hockey team were bundled out in the quarters and were “massively devo” as a teenager explained.

Another teen, Keegan Palmer, 18, won a gold on a skateboard, ripping off ridiculous manoeuvres in the air. Logan Martin from Logan, Queensland did things on a bike they didn’t even conceive at Kambah BMX Track in 1981, I can give you the tip.

The pair won Australia’s only land-based gold medals. As befitting citizens of the world’s biggest island, we won fifteen of our 17 gold medals by swimming, rowing, sailing, kayaking and canoeing through water.

Jess Fox! What a ripper. Powered into gold in the canoe slalom just two days after nudging a dangling pole to miss out on gold in the kayak.

We crowned a new Oarsome Foursome. We won the women’s four as well. And a pair of twin-brothers-from-another-mother blitzed the field in perfect all-action synchronicity to win the men’s kayak double sprint over 1000m.

And then, at the end, our sailors just had to stay afloat to win gold in dinghies. Good on them.
And good on them all.

Good on, too, the great American gymnast Simone Biles who put her mental health before a circular metal disc.

Good on Lamont Jacobs of Italy who came from the clouds to run 9.80 in the 100m sprint and run faster than the fastest men in the world.

And good on those skateboarders. Those precious little people with their piercings and messy hair, cheering on one another in a genuinely collegiate sport, where shared humanity and empathy trump everything else.

Want a takeaway from the Games? Take that.

And when all this shit is done, go visit Japan. They deserve a medal. And a hug.