Magic Round, held in Brisbane on May 14-16, was the moment rugby league changed direction and finally got serious about concussion.

On one weekend no fewer than 14 players were sent to the sin-bin and three were sent off as the NRL came down with all the crudeness of a crusher tackle to signify that contact to the head would no longer be tolerated. ARL Commission chairman Peter V’landys’s crusade to combat concussion was on in earnest.

Or so we were encouraged to believe.

The weeks since have been marked by an emotionally charged tussle for the soul of rugby league between those who understand that things need to change and those who, even if they accept that premise, demand a lower threshold and a more gradual approach.

There is consensus on both sides of the cultural divide that the game is evolving. Players who initiate head-high contact are now more likely to face sanction, the sin bin and/or a suspension. Tolerance for what constitutes head-high contact has altered, capturing more players in the crackdown net.

A fawning NRL media has lauded V’landys as a hero for having the fortitude to ride out criticism of the crackdown, never stopping to ask V’landys or themselves why this wasn’t enacted last year or the year before. 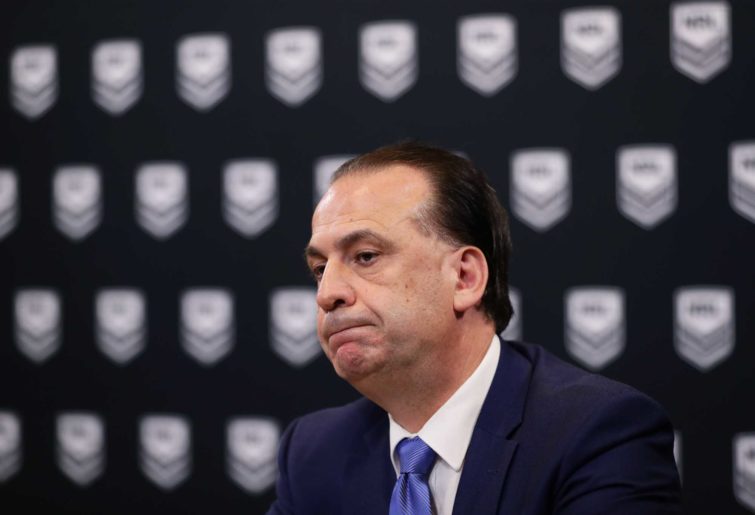 A dozen weeks on, with referees, coaches, players, media and fans all having had an opportunity to acclimatise, some conclusions may now be drawn.

There are also three further outcomes that cut below the surface and are critical with respect to where things head next.

Dr Adrian Cohen, principal of Headsafe, a Sydney scientific technology company developing products to aid the diagnosis of concussion, recently outlined to Safework NSW his concern that, in light of Worksafe Victoria conducting multiple investigations into concussion in the AFL and with respect to the repeated incidences of concussion in the NRL, the NRL has failed to provide a safe workplace.

SafeWork NSW’s reply to Dr Cohen, a copy of which has been obtained by The Roar, was emphatic.

“SafeWork NSW has determined that the NRL has appropriate systems, governance provisions and medical oversight arrangements in place to manage the risk of head injuries to players.”

Yet there is overwhelming evidence to the contrary. Incidences of failed head injury assessments are rising. Brien Seeney, behind the respected Twitter account NRL Physio, reports that in 2016-20 there were an average of 94 failed HIAs per year. At the current rate he expects there to be 120 failed HIAs in 2021, a 28 per cent increase.

Why is this not a matter of concern for SafeWork NSW?

Failed HIA rates remain constant at 38 per cent. Arguments that the increase in failed HIAs might reflect improved effectiveness and compliance are offset by multiple examples of seemingly concussed players either not being tested or surprisingly passing their Tests.

Remember that HIAs test for symptoms of concussion, not for concussion itself, and that a passed HIA is not proof or confirmation that a concussion has not occurred.

Note also how earlier this year the NRL changed its own criteria for how it defined concussion, effectively shifting the goalposts in order to halve the number of reported concussions overnight without that changing the medical outcome or concern for those suddenly ‘non-concussed’ players.

Players continue to game the system. A June 2021 poll found that 73 per cent of players believe that players intentionally disguise concussion symptoms in order to stay on or return to the field.

With respect to these points, and taking into account concussions that occur at training that go largely unmentioned, Dr Cohen is one of a number of medical experts who believe that the actual number of concussions suffered by NRL players is under-reported.

“Because there is no independent reporting of concussion and no central data collection point, there is no transparency with respect to how or even if the NRL is recording information on concussion,” he explains.

Whatever the true number of concussions, are we to take it that SafeWork NSW considers 120 failed HIAs per season to be an acceptable number? Would a factory owner who oversaw 120 concussions to his employees per year receive the same tick of approval?

In its reply to Dr Cohen, SafeWork NSW makes a number of specific determinations, stating that the NRL has:

“a dedicated medical advisory panel. The panel provides advice to the NRL that informs the regular review of various medical protocols”.

The previous NRL chief medical officer, Dr Paul Bloomfield, left the NRL in March this year and was replaced by‘medical operations manager’, Craig Catterick, co-ordinating a panel of five doctors. The NRL has since made no information public about the panel’s terms of reference, operations or members.

Questions about the medical advisory panel were put to the NRL by The Roar. The NRL failed to respond.

“Independent sanctioning procedures in place that reinforce the rules and the provision of issuing penalties should it be found that the rules have been breached.”

It might be argued that this is the one area of the game where individual cases and decisions are not passed over the chairman’s desk for V’landys’s personal imprimatur. But independent? In what sense? Referees are employees of the NRL and the judiciary operates within the framework provided for it by the NRL.

“Appropriate surveillance arrangements in place during each game to ensure the identification of foul play, head knocks and/or any other injury that may occur in a game that may lead to a head injury.”

Despite intense lobbying from the referees that the dual-referee system better protected players, V’landys abolished the second referee, ostensibly as a cost-saving measure. Almost certainly cases such as Lachlan Lewis and others being allowed to play on while obviously concussed would not have occurred had the pocket referee been on the field.

“Taken steps to provide clubs and club medical officers with a range of technology and tools to assist with the identification and management of potential head injuries.”

For in-match HIAs the NRL now uses an electronic version of the sport concussion assessment tool (SCAT5) test, but SCAT5 has been widely discredited by concussion experts worldwide.

This year Super Rugby used new eye-tracking technology called NeuroFlex, which provides a fast, non-invasive indicator for players suspected of having suffered a concussion. At the initiative of the developer the product has been placed into two Sydney clubs, but the NRL has so far not put this device or new mouthguard technology into routine use.

Dr Cohen is clearly frustrated by SafeWork NSW’s response. “Their letter advises that they have undertaken enquiries with the NRL. It would seem that rather than conduct an investigation, they have merely invited the NRL to comment on itself,” he says.

“There is also a sense that whatever measures the NRL might have in place today absolves it of past inaction,” he added. “It doesn’t.”

In the meantime the 2021 competition rolls on despite continued concussions and high-profile players such as Jake Friend and Boyd Cordner being forced into early retirement due to concerns over long-term health impacts. Friend is estimated to have suffered more than 20 concussions in his career. 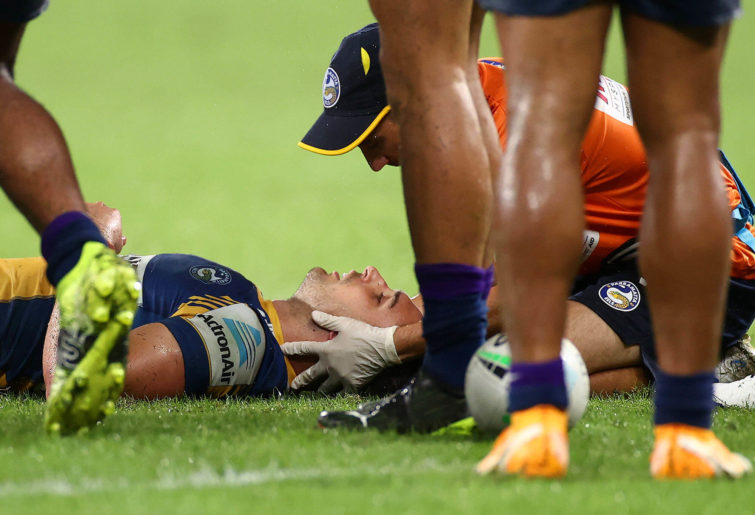 Despite education programs and legends Steve Mortimer and Ray Price among those publicly struggling with their health, players continue to fail themselves. Playing against Parramatta in Round 15, Canterbury second rower Adam Elliott entered a tackle zone upright, suffering a heavy head clash. Despite the head contact and a fractured cheekbone, Elliott resisted leaving the field for an HIA, telling the trainer he had an ankle injury.

The Melbourne Storm’s Ryan Papenhuyzen recently outlined to media his “awful” struggles with concussion this year, where “I was like a corpse, I was a shell of myself” as he was “forced to stay in bed and go through a sleeve of Panadol every day for two weeks” to combat severe headaches.

Yet Papenhuyzen was also at pains to defend the sport, insisting, “just because you get a head knock doesn’t mean you will get CTE”.

Regardless of its ham-fisted implementation, V’landys’s foul play crackdown, while overdue, was welcome. Wider attention was bought to the matter of concussion, and cultural change with respect to attitudes towards the long-term effects of head injury is occurring.

It is, however, only part of the story. Concussion incidences are not falling. Despite sanctions being stiffened, players continue to hit each other in the head, and nothing has been done to address concussions arising from other than foul play.

In the case of Friend, Seeney determined through his NRL Physio Twitter account that the majority of his concussions occurred as a result of contact in upright or high tackle situations.

He also cited a study of over 6000 tackles showing how the risk of an HIA being required for either the tackler or tackled player was 3.2 times higher for upright or high tackles compared to low or bent at the waist tackles. It concluded that “lowering the tackle height appears to be protective for all players on the field”.

Stern challenges lie ahead for the NRL. V’landys has attempted to address the perception that the NRL has been sitting on its hands with respect to concussion. But if outcomes aren’t improving, what is the purpose? And who is holding the NRL to account to actually provide a safer game for players?

Is V’landys prepared to lead a holistic conversation about concussion, taking into account foul play, tackling methods, coaching, player attitudes, full-contact training volume, rules of the game, the NRL’s governance, medical advice and technology to determine how the game can best move forward, meeting acceptable safety levels while maintaining the essence of the sport?

Or with SafeWork NSW rubber-stamping the NRL’s handling of concussion, does the NRL now believe that enough has been done to keep the wolves from the door?

In September ex-Newcastle player James McManus will finally get his day in court, where it is anticipated that he will allege that his club breached their duty of care to him by allowing him to play after he suffered numerous concussions.

If McManus is successful, neither SafeWork NSW nor an armour-plated door will be enough to hold back the tide of lawyers that will storm V’landys’s office brandishing a slew of similar claims.