Your club's underrated performer: Round 21

From upsets to lightning storms and anyone’s guess on who finishes in the eight, many performances went under the radar and they must be highlighted.

Adelaide Crows: Nick Murray
The Crows almost had it! They almost pulled off the biggest upset in Showdown 50, and what a win it would have been, but alas they walk away with a lot of respect and a newfound key back for the future.

Murray is 193 centimetres tall, turns 21 in December and had a dozen kicks at 85 per cent efficiency, eight contested possessions, eight intercepts, five tackles, three rebounds and three inside 50s. He was fifth for the Crows in metres gained, with 370, and also had nine pressure acts. That’s a huge tick for the youngster.

Brisbane Lions: Grant Birchall
The old dog’s tricks are pretty strong with this one, and Birchall showed an uber amount of class in his ball use. The former Hawk had 21 disposals at 100 per cent efficiency, half a dozen rebounds, four marks, three intercepts and 294 metres gained. It was a good win for the Lions too, by the way.

Carlton Blues: Matt Kennedy
The former Giant has featured here a few times, and the members of the underrated community are picking up what he is putting down. He had 23 disposals at 78 per cent along with a handful of masks, tackles and inside 50s with three clearances, rebounds and score involvements.

Collingwood Magpies: Finlay Macrae
There is so much about Dog and brother Jack making up Finlay that it’s genuinely nuts, but the Pies should be pretty happy with where their youngsters are at, even though they went down to Hawthorn. Macrae picked up 20 disposals, four marks, three score involvements, two tackles, two inside 50s, two clearances and his first goal in AFL footy. Keep doing your thing, young man. You’re going to be a gun.

Essendon Bombers: Tom Cutler
Dylan Clarke can deem himself criminally unlucky here. He also had himself a good game, but there’s something about a good, honest wingman having a supremely good performance that appeals to the heart and soul of us here at underrated HQ.

The former Lion had 17 kicks among his 22 disposals, eight marks, six rebounds, four inside 50s, three tackles and three score involvements, and he was running at 77 per cent efficiency. The man put in a fantastic effort.

Fremantle Dockers: Brandon Walker
We love seeing some youngsters shine, and Walker was one who did when the Dockers were on the receiving end of a good old-fashioned smacking. He picked up 15 disposals, 11 pressure acts, seven intercept possessions, six marks, four inside 50s, three rebounds and three tackles and clocked up 346 metres gained, ranking fifth for the Dockers.

Geelong Cats: Jack Henry
It’s not the first time he’s been mentioned in this segment, but this man’s ability to play multiple positions and play them well is extraordinary. On a night when Geelong had injuries and a lack of urgency Henry looked dangerous all night, with 16 disposals, seven marks (two contested), four rebounds, four score involvements and two goals. He played back and forward and was very good.

Gold Coast Suns: Darcy Macpherson
A player who the common fan wouldn’t recognise if he turned up in your cornflakes, the No. 44 from the Suns put in a performance that matched the maturity of his teammates. Let’s not forget that footy fans were calling for the club to fold after their 98-point drubbing to Melbourne.

However, this is about MacPherson after all, and he had 21 disposals at 80 per cent efficiency, nine contested possessions, six marks, five tackles, four clearances, four score involvements, four intercepts and a brilliant 18 pressure acts.

Greater Western Sydney Giants: Leon Cameron
Could’ve thrown a blanket over a dozen of them on Friday night given they were simply extraordinary, but I’m going to give the credit to a man I’ve been a critic of, Leon Cameron. The Giants were missing a host of stars on Friday and playing on a ground Geelong had won 90 of their last 100 matches, and not only did they have a win, but they won the first three quarters and stood up when it counted. An immature team showed maturity beyond their years, and the man in charge deserves the kudos.

Hawthorn Hawks: Jonathon Ceglar
Hawthorn had 14 players collect 15-plus disposals and 11 collect more than 20 against the Pies, doing to Robert Harvey’s men what they did to West Coast last week: using uncontested ball to slice them apart.

When Ned Reeves was managed, Hawks fans were up in arms, but it worked a treat. Ceglar had 20 disposals (13 contested), eight clearances, eight score involvements, six marks (three contested), three rebounds and two inside 50s and went at 90 per cent efficiency. The biggest of ticks.

Melbourne Demons: Luke Jackson
This young man is a genuine gun, but the whole rising star debate is being dragged out but whether Jackson is the best of the young guns or not. Let’s respect his performances as individual games. He had 21 disposals (11 contested), six marks (three contested), six hit-outs, five score involvements, two clearances and 11 pressure acts, and he was a threat all night.

North Melbourne Kangaroos: Jack Mahony
On Triple M, James Brayshaw described the 19-year-old from the Sandringham Dragons as a player who won’t win the Brownlow but the type of good role player all premiership sides have, and Mahony demonstrated that type of ability on Saturday.

He impacted every contest he was in with his 18 disposals (eight contested), five tackles, four marks, three score involvements, three interceptions, a couple of inside 50s, a goal and 19 pressure acts. He copped an injury, but that doesn’t stop the love from underrated HQ. 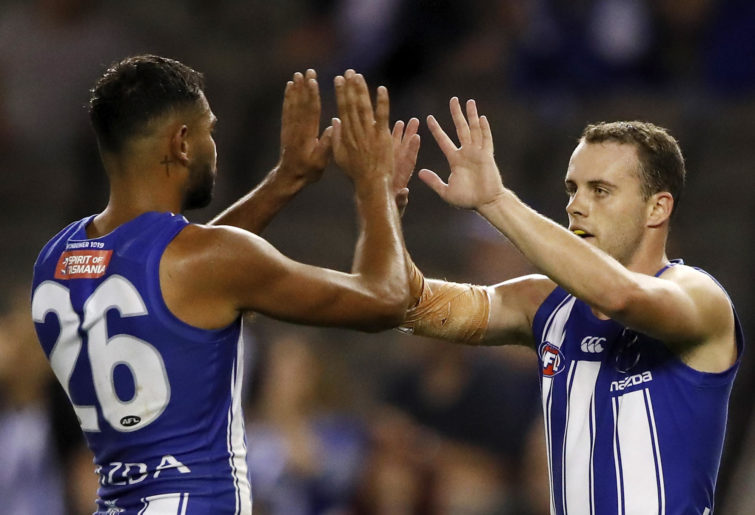 Port Adelaide Power: Trent McKenzie
The Cannon is a fan favourite down at Alberton, and why wouldn’t he be when he consistently shuts down key forwards, uses the ball magnificently and is a genuine gun.

Richmond Tigers: Sydney Stack
Everyone makes mistakes, and Stack’s have been ground out and whacked over his head enough that we don’t need to pile on here. However, let’s give out some due credit for some good footy. How good? The response is thus: 22 disposals, nine marks, eight pressure acts, seven contested possessions, five inside 50s, four score involvements and 73 per cent disposal efficiency. Well done, Stacky.

St Kilda Saints: Daniel McKenzie
For some strange reason this win hasn’t been spoken about a lot, which seems a touch indifferent since it was a team who wants to play finals strutting their stuff over a contender. McKenzie was at his nuggety best with his signature touch of class, with 20 disposals at 85 per cent efficiency, eight contested possessions, seven marks, six score involvements and intercept possessions, five inside 50s, 409 metres gained (third for the Saints) and 13 pressure acts.

Sydney Swans: Harry Cunningham
I’m not sure there’s a player who has made me change my opinion of him more than Cunningham has in 2021. This man is turning himself into one of Sydney’s most dependable and reliable players, and my hat goes off to him. On Saturday night he had 21 disposals (ten of which were intercept possessions), eight contested touches, five one-percenters, five marks, 296 metres gained and a dozen pressure acts, which shows off his elite two-way capabilities. It was a poor night from the Swans, but not from their No. 7.

West Coast Eagles: Mark Hutchings
The 30-year-old needed to bring some grunt in the West Coast side, and he applied his trade really nicely. He had 16 disposals, laid six tackles, had five contested possessions, took three marks, had three intercept possessions and had a couple of clearances and a couple of inside 50s, and he made 19 pressure acts and gained 218 metres.

Western Bulldogs: Adam Treloar
It might seem strange that a player of Treloar’s quality ends up in this segment, but sometimes it’s what the commentators don’t talk about that can get a player here. Yes, Treloar was back, but could his actual play be talked about? The man had a very solid 22 disposals at 81 per cent efficiency, seven marks, six score involvements, four rebound 50s and a goal. Respect the man, and fingers crossed he’s fit for the finals. 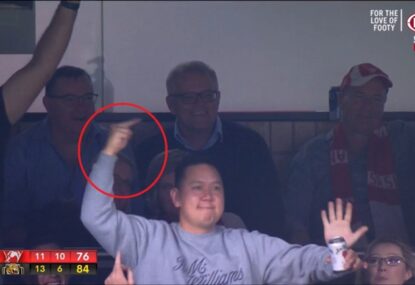 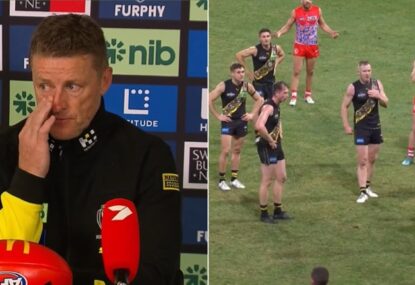