Watching the Sharks’ Will Chambers remorseless verbal attacks on his opponents it suddenly occurred to me that I was watching the beginning of the end of on-field sledging in the NRL.

The game has evolved to such an extent that its ugliest attribute – and therefore the next target for cleaning up – is verbal abuse between players.

In a performance we’ve come to expect recently from the 33-year-old Queenslander, Chambers was unrelenting in his targeting of the opposing Warriors players with abuse.

From the couch it is very hard to know exactly what was being said. However, he was unquestionably unyielding in his verbal barrages and he was not being polite. This resulted in Warriors reserve forward Kane Evan’s throwing two punches at Chambers in the 35th minute of the game and getting sent to the sin bin.

That is exactly what Chambers was aiming for.

He was trying to get his team an advantage by upsetting his opponents enough to put them off their game and just maybe get under their skin enough that they snap and throw a punch.

Because, as we all know, as soon as someone throws a punch they are sin binned.

Since 2013 when Paul Gallen repeatedly punched Nate Myles in Origin 1 after the former’s clear statement to the latter to cease his grub tactics fell on deaf ears, anyone who throws a punch in an NRL game will get sin binned.

This knee-jerk reaction was put in place under the regime of former NRL CEO David Smith after some outraged school principals complained about the poor example that violence in the sport set.

For years we all celebrated fights in State of Origin matches.

They have been intrinsically intertwined with the folklore since Artie Beetson punched Graeme Wynn in the head in the very first game back in 1980.

There have been physical altercations that have been talked about for years: Steve Walters and Benny Elias’ constant battles; Brad Clyde belting Martin Bella after the latter attacked the former’s testicles in a tackle; David Barnhill and Billy Moore swinging like windmills; Jamie Goddard belting three colours of shite out of Andrew Johns; and of course Gallen belting Myles. However, it all came to a grinding halt after the night of June 5 2013.

As much as it pains me to say it, it was right that punching was rubbed out of the game. It was an aspect that was tolerated long after legendary Jim Comans rubbed endemic thuggery out of the game.

While I do miss the rush of watching a fight break out, I know that my base voyeuristic instincts should not be followed or encouraged. I know that ‘the biff’ isn’t the way to go. Just like those principals who lectured David Smith back in 2013, I know that fighting should have no place in the game as it sets a bad example and it isn’t part of the game.

Removing punching hasn’t necessarily been all good though.

One byproduct of banning of punching is the rise of the trash-talking player. Once upon a time if you wanted to give an opponent an earful you had to be prepared to get thumped. As a result, lots of players thought twice before mouthing off.

Now we have the likes of Jarome Luai, Dylan Walker, Cody Walker and Will Chambers (just four examples, there are plenty more) free to constantly mouth off, safe in the knowledge that they are highly unlikely to get punched – and if they do, the puncher will get sin binned.

So while I totally get and accept that punching had to go, the idea that only the punching is punished is something that astounds me. Surely provocation has to be considered by any reasonable adjudicators.

They were both sorely provoked.

In my opinion, provocation should definitely be punished once it passes the point of being reasonable.

Acts of vile grubbery – such as John Hopoate inserting his finger into the anus of opposition players or Kevin Proctor attacking the testicles of Jordan Rapana – should be subject to instant dismissal, lengthy suspensions and large fines.

While not to be condoned per se, any violent reaction that occurs as a result of such disgusting behaviour should be viewed as provoked and go unpunished.

Incidents such as Myles deliberately trying to injure Gallen outside of what constituted a legal tackling action or Cam Smith attacking Jarrod Croker’s injured knee in a dead-ball situation should be put on report if video evidence is not absolutely conclusive. However, if it is then they should result in sin binning or dismissal.

Actions like Johnathan Thurston deliberately slapping Luke O’Donnell should result in sin binning, as they are purely intended to provoke violence and are, in effect, physically assaulting someone.

Of course verbal provocation that involves racist, religious or sexuality based slurs should result in immediate send offs and lengthy suspensions.

However, if someone is sledging inside of those bounds it might be unpleasant but it doesn’t justify a penalty, a sin bin or a send off presently.

The exception to this are incidents like in Round 11 2018, Manly’s Dylan Walker deliberately re-inflamed a heated situation by again provoking Curtis Scott. While Scott got sent off for repeatedly punching the obnoxious Walker in the head, Walker was also sent to the bin for ten minutes by Henry Perenara.

Scott should only have been sin binned as his violence was sorely provoked and could in no way be described as king hits.

While sledging is pretty much tolerated in our game, watching Chambers over the last couple of games relentlessly bombarding his opponents with verbal abuse really irritated me.

Imagine that sort of behaviour being tolerated in any other work place. It just wouldn’t be. However, sledging is seen as part and parcel of professional sport. 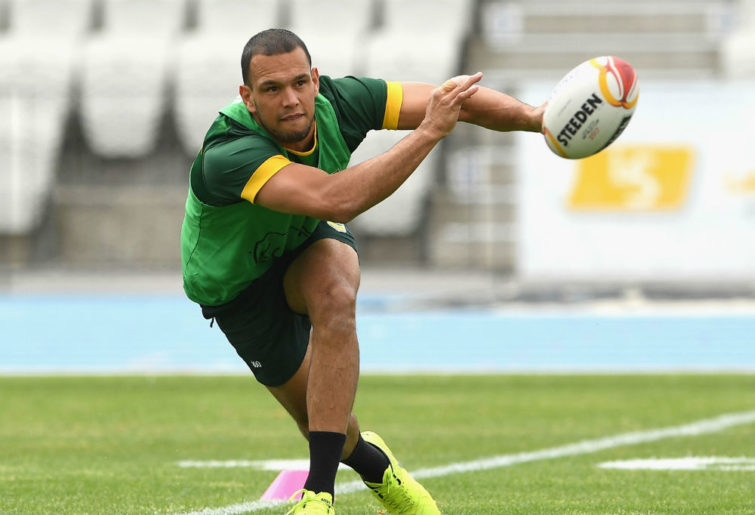 However, relentless abuse of the sort that Chambers (and others) engage in is just pathetic. The 33-year-old Shark is at the tail end of his career and his best playing days are well behind him.

Sledging is a tool he uses to try and gain any sort of competitive footing he can in a game that is getting away from him. If he can put Walker off his game or get Evans to throw a punch, then he’s helped his team.

This is the question I posed about Chambers’ behaviour on Twitter while watching the Sharks-Warriors game.

I tell ya what, will chambers really lowers the tone, not just of the game, but if humanity. The constant bile and vile abuse he sprays is an indictment of his character. I know it’s a rough game, but surely there’s a point where the game is brought into disrepute.

That tweet drew a number of responses basically saying Chambers’ behaviour was fine:

It’s professional sport mate. As long as race & other slurs aren’t used it should be play on…

As long as he doesn’t bring race in who cares.
I think the games misses it. Love a verb barrage

Oh come on, it’s just words. How weak do you have to be to respond to it.

I love players like chambers who can get under the skin of the opposition. I’m no sharks or will chambers fan but as long as it’s not racist then it’s fair game. Don’t be a snowflake ❄️

You’re a mess. Lowers the tone of humanity. Stop it. It’s called gamesmanship. Getting under an opposing players skin to get a reaction out of them and help your team. If the sledges aren’t racist or attacking family its fair game. Constant bile and vile abuse. Gee whizz.

The great thing about the majority of these responses is that they recognise that racism isn’t on. That shows that we football supporters have really changed for the better.

Back when I was watching the Raiders at Seiffert Oval in the early 1980s, racist slurs were frequently heard in the crowd and seemed to be quite acceptable.

However, as far as we’ve come, we’ve still got a ways to go it seems.

So while sledging does seem to be widely tolerated in our game, is there a point where a line is crossed?

With the relentless march of increased standards of decency within our society – often referred to as ‘political correctness’ by those who resist modifying their behaviour that others find offensive – the unremitting trash talk meted out by Chambers and others may be the next thing to draw the ire of school principals.

How will it be defended then?

How can we actually defend people verbally abusing their opponents in what is for all intents and purposes a workplace?

The reality is that we can’t and abusive sledging will inevitably be rubbed out of the game. Just like Comans rubbed out thuggery. Just like Smith rubbed out punching. Just like racism is no longer tolerated. Just like sexual orientation slurs are no longer acceptable.

Sledging and abuse of opposition players is now the ugliest thing about the game and, as such, it will inevitably come under greater scrutiny and sanction.

So, for those of you who condone it, you should enjoy the antics of the likes of Luai, Chambers and Walkers Cody and Dylan while you can.

Because the reality is that this is inevitably the beginning of the end of the trash-talking player.