In defence of Ben Simmons

The Sixers have made the playoffs for the last five years, led by Ben Simmons and Joel Embiid.

With two All Stars playing and the long-range shooters in support, they won the home and away in the Eastern Conference this year.

They proceeded through the first two rounds of the playoffs, easily taking care of the Magic and the Russell Westbrook’s Wizards. Then they came up against the Hawks losing four to three. Trae Young’s long shots and layups were just too much.

But that’s just the bigger picture. The focus was on Simmons. His free throw shooting sinking to 33 per cent.

Oppositions were deliberately fouling him because they knew he would miss, and they would get the ball back. And it affected Simmons.

He started to sink within his shell and backed off the layups and dunks. This former number one pick and all star had imploded. And everyone was piling on. Ex-NBA champions, current ones and every keyboard warrior got their two bobs worth.

I watched the game. It was agonising and a very depressing result. The coach and Embiid let everyone know who’s fault it was.

Ben subsequently pulled out of the Olympic team and was seen with a new pretty young thing at Wimbledon, dressed up to the Tees. Buying a new mansion in Los Angeles. It makes it pretty hard to like a guy like that.

I was a Simmons fan, but I thought I was cured. A choker, a loser, move onto somebody like Matisse Thybulle. But no, two months later, I am here to represent Ben Simmons.

2021 was an emotionally hard year for Simmons. His sister accused his half-brother (who happens to be Ben’s manager) of molesting her as a child. 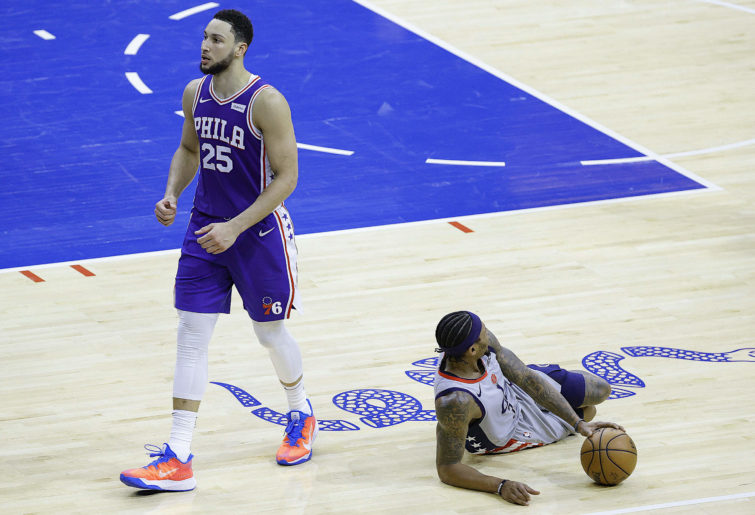 The family claims that she was mentally ill and making it up. I am not saying I know the truth of the matter. But in any case, the situation would weigh heavily on Simmons. This doesn’t absolve Simmons of his playing culpability, but it must at least diminish his responsibility.

Let’s have a look at Simmons’s partners in crime. Embiid, after the loss, threw Simmons under the bus.

“I thought the turning point was when we (Simmons) had and open shot, and we made one free throw and we missed the other and they came down and scored.”

He was referring to Simmons wide open dunk which he passed back to Thybulle. Lovely guy Joel. We lost because of you, Ben.

Then there was his coach, Rivers. “Obviously he has struggled at the free throw line and that has become a factor in this series.”

“I don’t know the answer to that right now” when asked if Simmons can be a point guard in a championship team.

Another hand in the back pushing Ben under the bus. A man who is famed for coaching losing finals team. A man who is known not to make the changes when it’s needed in finals. He has lost six playoff series being up 3-2 and three being up 3-1.

And Ben, shoved under the bus by the coach and Embiid, will have to go. Hopefully where he gets support and encouragement.

Basketball is not just about shooting. It is about defence and about passing, assisting other to score. And Simmons is a gun at both.

He is top five, if not top two defensive player in the league. In the last playoff series, Trae was unguardable to all by Simmons.

He can and does guard and win against the best in the league from speedy point guards to powerful towering centres. Simmons elite defence was a major factor in getting the Sixers to the third round in the first place. 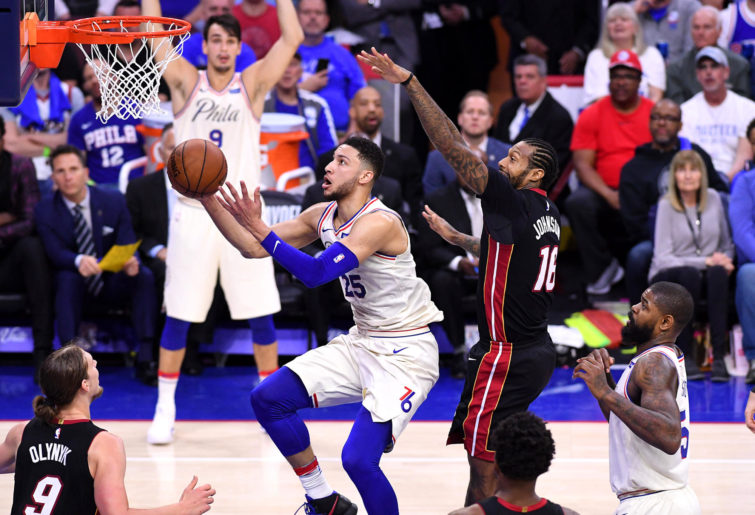 Ben Simmons drives to the rim against James Johnson in Game 2 of the first round of the NBA Playoffs. (Photo by Matteo Marchi/Getty Images)

Simmons is on the verge of a triple double in almost all games he plays. His height, athleticism and defensive positioning usually results in around ten rebounds.

He would have more, but he leaves a lot to Embiid. Shooting ten points is not usually a problem to most basketballers and not usually Ben. The third, the hardest part, of the triple is assists. Simmons is a premium passer. He hits players with precision and speed.

He is one of the best in the league if not the best. Simmons will develop more, away from Embiid and become an absolute triple double machine. A lot like Russell Westbrook, but with a nicer demeanour.

Simmons is a selfless player. He doesn’t take the three pointers because he feels that others are a better shot. The famous non dunk occurred because he believed that passing the ball would guarantee two points whereas shooting might result in a foul and 33 per cent chance of two points.

Simmons should be advised, no ordered to take the ten-foot jumpers and the three points. I believe he would get a similar percentage as Westbook does. And few complain about him. And his shooting can only get better.

Ben Simmons is still just a babe in the scary world of hard men that reside in the NBA. His speed and strength can outdo most. He needs the confidence to proceed against some beasts. If he is not intimidated, he should be unstoppable on the drive. He needs to be.

Way back in the last century when I played basketball, a deliberate foul would buy you two from the line and the ball back. If this was the case, the rope a Ben would not be happening. Seeing Magic Johnson praising Hawks for their tactic was not a good look.

I see it as bad sportsmanship. I guess Ben can stamp it out by scoring 80per cent of the line. And that is pure technique and practice.

On the charge of not caring for his team and not wanting to win, I say not guilty.

On the charge of choking under duress, guilty. I sentence Ben to three months of intense shooting practice and upon release a coach to take him under his wing to make him the superstar he can be.