BRETT GEEVES: Forget AFL's latest tease, only the map of Tassie will excite us now

Once, in the middle of a night club, my friend – who stands 6’3, 115kgs – asked if I had ever smelt the cheese. Replying “Nah” in a tone that suggested I was excited by the prospect was my first mistake.

Bending down to sniff his clenched fist (cheese) as it sat on his dinner plate sized hand was my second mistake.

Continuing to drink and not seeking medical attention, after his fist slammed into my nose, was the third.

But perhaps the biggest mistake of all was trusting the intention of someone who should have been looking after me through our life-long connection. This was a relationship built on respect and love, and my desperation to be involved in the revelry saw me taken advantage of and punched in the face.

The good news, for me, is that I am not alone in this whole “trust, love and want for involvement in the revelry so bad I will do and believe almost anything” thing. Tasmanians have been smelling the AFL’s cheese for longer than anyone can remember.

The most recent recommendation handed down by the AFL, via a feasibility study authored by former Geelong President, Colin Carter, presented this as his summary of findings.

SUMMARY OF FINDINGS:
The case for Tasmania is strong, and the recommendation is that Tasmania should be represented by a team in the AFL/AFLW national competitions – but the best form of that team is less clear-cut. It could take the form of a 19th license and that case can be made. But re-location of an existing team if a club is keen to take that path, or a joint venture between Tasmanian stakeholders and a Victorian team that secures strong support in the two markets from the outset, would arguably produce a more sustainable outcome.

The one thing I love about the English language, and how we roll it out, is the use of “but”. It provides freedom to do the exact opposite of your opening statement.

No disrespect, but I am now about to blatantly disrespect you.

WHAT IT REALLY MEANS:
The case for Tasmania is strong, and the recommendation is that Tasmania should be represented by a team in the AFL/AFLW national competition – BUT the reality is that we have wasted even more money and time to fashion up a bunch of words that were aimed at getting Tasmanians to see it our way via these three offerings, of which, only two are viable through the use of “BUT”.

2. Relocate North Melbourne or some other low membership and deficit ridden Melbourne based club down their full time under the guise of “joint venture”.

3. Victorian clubs continue to play out of Hobart or Launceston.

The above options will be explored through the implementation of their own separate feasibility studies, formation of four taskforces and three steering committees so that this will drag out long enough that the Tasmanian state government will have to continue to be the booty call of the AFL if it wants access to AFL games and stimulus into its winter economy.

In short – the AFL just punched us gullible Tasmanians in the face . . . again. No standalone Tasmanian team is incoming.

We don’t want a failing club relocating here for the cash. You think attendance is low for North Melbourne games now, wait until we really hate them because “they took our jobs”.

We have appreciated the offering of AFL into the community, our hospitality and tourism industries have loved the injection of participants into their winter financials, BUT we are done. 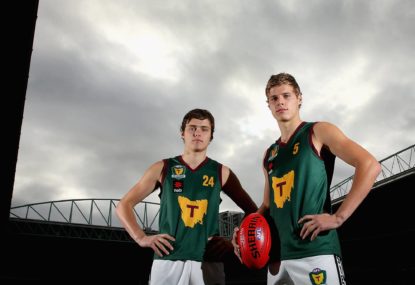 And so, it seems, is Premier Peter Gutwein; who arrived to his 11am press conference, established to respond to the Carter Review, in a White Cortina (Tasmanian equivalent to a White Knight) and said “NAH”, except this time there was no enthusiasm or body language that suggested further exploration would be taking place.

“The AFL have taken the view that they can kick the can down the road. Well let me be clear, there will be ramifications for that” said Premier Gutwein in a fashion that provides imagery of him flicking the bird at any offering of cheese making.

And the rest, I’m paraphrasing here:
• Premier Gutwein said a joint venture is not an option for a Tasmanian AFL entity.
• That he won’t roll North Melbourne and Hawthorn contracts over until he gets a satisfactory response from the AFL.
• If the response doesn’t come this year, then there will be no money from the Tasmanian Government and no games in Tasmania. And this will be on the AFL’s head.

Tasmania’s savior. Premier Peter Gutwein. Not only has he stopped COVID from entering the state through his hardline stance on border control, but he is now putting a stop to the 3am desperation call from Gill after GWS, Hawthorn, North Melbourne and the sporting graveyard of the Gold Coast stopped buying him drinks because they all ran out of money.

The Premier has indicated strongly in the past that he was willing to rehab the state’s addiction to these immoral practices by standing up for the unified voice of the Tasmania football community.

And to see him hold firm on that stance, the only viable position for Tasmania to have a stand-alone team, is one that provides me, and I am sure the broader football community, with great hope.