As we approach the pointy end of the season, it’s time we gave Ray Chamberlain his due ahead of what should be a busy September schedule for him.

Rightly or wrongly, there is no more divisive figure in the AFL than “Razor Ray”, a man who is as known for his entertainment value as he is for his role as one of the key umpires in the AFL.

At the best of times, AFL fans have issues with umpires. The more parochial the supporter, the worse the outlook on those that adjudicate our great game.

Ask 90 per cent of people who watch footy and they wouldn’t know more than a handful of umpires, other than plucking their names off the screen when it’s time to get abusive.

Labelling any individual as the best is purely objective, many would respond that the best umpires are the ones they don’t know much about, going about their business in a quiet way.

Umpires are largely in a no-win situation.

The laws of the game are ever-changing and constantly vague, making it hard to actually adjudicate and whenever something questionable arises, the knives are out and the umpires are the ones who cop it. Consistency is difficult when rules are open to interpretation.

They wear the brunt of universal frustrations on a national scale and rarely receive any praise for doing a good job.

With how umpires are treated nationally, it’s a wonder how local umpires are able to cope even worse offences without the protection the AFL can provide.

Chamberlain sets himself apart from his colleagues with his unique, often entertaining approach to his role. He isn’t afraid to interact strongly with the players and put himself out there in the media.

That’s why so much is spoken about the 44-year-old, because he’s the one who’s happy to put it all on the line for his umpiring brethren.

Notching up his 350th game on the weekend, he once again grabbed a couple of headlines in the post-game after a stare akin to that of a disappointed father, directed at the increasingly frustrated Isaac Heeney.

A lot of people react poorly to an incident like this, that had no influence on the game, nor did it affect any individual.

Some say Chamberlain is seeking attention, wanting to create headlines. The umpire is just doing his job and letting his personality to shine through.

In another year of piped in crowd noise, fixture instability and quite frankly, a lot of sitting on our collective lonesome trying to find something positive in the familiarity of footy, “Razor” has been a constant and noticeable point of difference, even more so when the game is surrounded by silence.

In Chamberlain, we get incredible accessibility to one of the most forthright and informative umpires in the competition.

On the field, we have an umpire who is fearless within the scope of doing his job. Chamberlain isn’t afraid to make big decisions at important times of the game and, contrary to what seems to be a popular belief, does it right down the middle.

In communicating with the players, Chamberlain is often conversational bordering educational. The buck stops with the umpire and he provides clear explanations to aggrieved parties and indeed the viewer, of his reasoning in the moment.

Given the fact we are able to gain such strong access to Chamberlain, we see the other side of the equation, where his mistakes are amplified, the deficiencies perhaps more obvious than with others, and when umpiring justifications may miss the mark.

The platform that Chamberlain has created for himself enables us to see the man behind the whistle, which is surely a good thing.

He fronts up when he makes an error and has built a rapport with the players that affords him to reach out personally.

In his Open Mike interview, the umpire famously shared a story where he bumped into Sam Mitchell at Monash University and was able to express his disappointment at the Hawthorn legend’s attitude towards a first-year umpire in a game, and the Brownlow Medalist accepted the feedback and took it onboard. 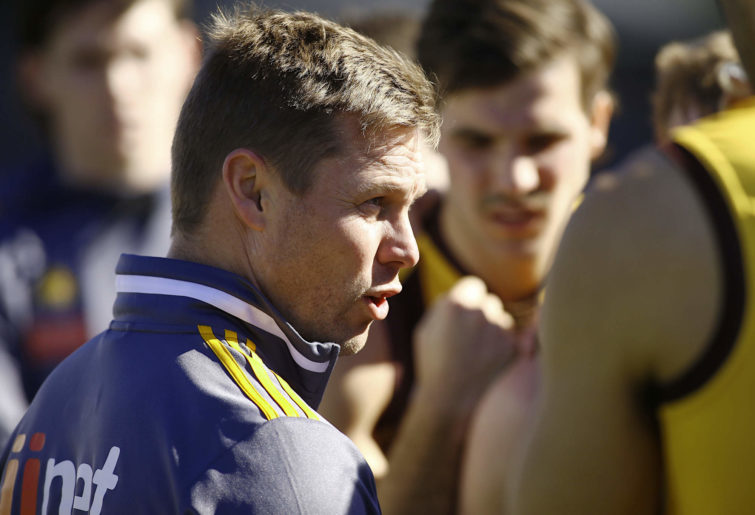 That sort of interaction doesn’t happen by accident and highlights the underlying respect that Chamberlain has earned in his 18 years in the game.

Chamberlain also provides insights into the laws of the game from an umpire’s perspective, discussing certain decisions on Melbourne sports radio and doesn’t shy away from being mic’d up during games, regardless of the social media backlash received week-on-week.

All of this makes for a package of a character the game has sorely needed, particularly during this period of time where the world is filled with negativity.

Umpires are hardly infallible, nor do they claim to be. The sign of a good umpire is consistency, good communication and a level of fearlessness and objectivity that is as predictable as it is vital to the game.

You can scour social media and forums, although I daresay you won’t have to venture too far, to see that those who adjudicate our great game are among the most under-appreciated figures in the sporting world.

It’s too easy to pick out the flaws, particularly when praise for ‘doing your job’ doesn’t tend to be forthcoming.

The reality is, though, that AFL umpires are pretty good at what they do and Chamberlain does a very good job in his role.

Having a personality only adds light to the game and it shines through with “Razor”, who is as entertaining as he is no-nonsense. Some may label the interactions unnecessary, other will appreciate the breath of fresh air.

When you look at some of the most recognised judges in world sport, they all have their own personality traits that have made them so noticeable.

Soccer had Pierluigi Collina, who was as passionately strong-willed as he was respected, while cricket had Billy Bowden, an entertainer who often copped the wrath of Australians, in particular.

Our man “Razor” falls somewhere in between in his own unique way and will go down in history as one of the AFL’s greatest umpires who changed the game for the better.

Hopefully it inspires the youth to continue to follow umpiring pathways without fear of being themselves.

He has done a lot for us viewers, particularly in the last two seasons when there hasn’t been much to hold onto and, whether you like it or not, he remains one of the most courageous and reliable umpires in the competition.

He is concise, informative and knowledgeable and a true asset for the competition.

Ray Chamberlain is an ornament to the game of Australian rules football and with finals fast approaching, the AFL should be putting him in the key spots and back their man in.