REACTION: 'Like wrestling a pig in mud' as All Blacks make Wallabies pay for 'chaos style' rugby

History tells us that it’s nigh on impossible for the Wallabies to get a result at Eden Park, but any chance of a spirited upset was crushed by crucial errors in Bledisloe II on Saturday night before the All Blacks ran riot in a record breaking 57-22 win.

Two intercept try concessions – after one in the opening game – and a poor lineout throw from Brandon Paenga-Amosa when the All Blacks were down a man and on the rack inside their own 10 metres early in the second half were presents gratefully received by their hosts.

“If the Wallabies want to give us gifts, we’ll take them,” said former All Black Sonny Bill Williams on the Stan Sport coverage.

“Just looking at the teams on paper, I expected the All Blacks to win and I expected them to win well and comfortably and that’s what they’ve done.

“Off the work of the tight five they were great but they took their chances.

“Where do the Wallabies go from there? They have to stay positive and they have those conversations you don’t want to have. It’s a tough one.

“The hardest pill to swallow would be the two intercept tries. They didn’t learn from their mistakes. Out there that’s what you need to pride yourself on.”

Wallabies captain Michael Hooper had another all action game, leading from the front, and looked devastated by the size of the margin between the teams.

“We didn’t capitalise on that yellow card and New Zealand put us to the sword and did a great job in managing time. They showed their class,” said Hooper.

“We didn’t respect the ball. A couple of intercept tries, going out of our shape. You play a team like New Zealand and they turn nothing into something.

“We fronted up physically well but didn’t stay in the fight long enough. We need longer performances, stick to the script a bit more and knuckle down.”

The turning point was a 10 minute spell straight after Ardie Savea’s yellow card where the All Blacks were let off the hook and went on to score 10 points with him off the park.

“You can never do that,” said Alanna Ferguson on Stan Sport. “It doesn’t matter who the opposition is, in a Test you can’t give 10 points away when you’ve got an extra player on the field.

“A lot of that for me comes back to mentality and mindset and how you come together as a team to stop that happening.

“We saw some really positive patches from the Wallabies – some came too late when the pressure was off but that’s one of those patches that was really disappointing for me, when they had an extra player and weren’t able to capitalise.”

Wallabies coach Dave Rennie was also in the dumps about the Wallabies lack of poise.

“We did a lot of good things with the ball in hand but you’ve got to treasure it. We turned it over too much. I thought we made some really poor defensive decisions, guys coming out of the system and getting exposed down the short side,” Rennie said.

“The All Blacks are too good to give them that sort of space. We went pretty well first half, really physical and created opportunities, but you can’t gift All Blacks intercepts and so on. A really disappointing night.

“It was a series of things, we had a five metre lineout, they’re down one player, it’s 21-15 and we score from there we’ve got our nose in front.

“I didn’t think we managed that very well. Think they got more impact off the bench, finished over the top of us.”

“If I’m a Wallabies player that’s what I have to talk about,” said Williams. “Scoring 10 points a player down, that’s what the All Blacks do and that’s why they’re one of the best teams in the world.

“I feel like a broken record – the threats they possess, all over the field are second to none.”

As the All Blacks charged to a massive victory, claiming a bonus point in the process in the Rugby Championship opener, former Wallaby Morgan Turinui lamented Australia’s loose approach to the contest.

“So impressive from this All Blacks team,” Turinui said.

“That’s the inherent danger of the chaos style the Wallabies are playing with this catch up rugby. It’s like wrestling a pig in mud – you both get dirty but the pig loves it.

“The All Blacks are just too good at this. You can’t chase and chase them. The support play is as good a lesson as you’ll see.”

Despite the loss Wallabies halfback Tate McDermott was outstanding, sniping constantly around the ruck and getting Australia back into the contest with a try just before halftime that made it 21-15.

“He got out and challenged the ruck, took some of those run metres, and what that does is it takes a lot of pressure off the players outside of him,” said Ferguson.

“He did that brilliantly, opened up the opportunities, the fact that he backed himself went over and scored those points was fitting.” 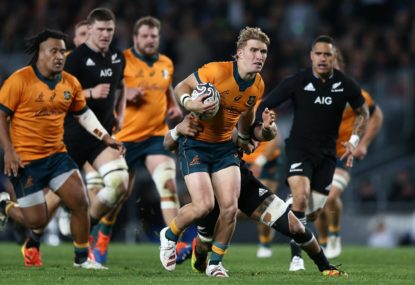 He was also integral to the Wallabies opening try, scored by Andrew Kellaway, the winger who midweek suggested the All Blacks didn’t have the same aura as in the past, and ended up with two here for three in his two starts as a Wallaby.

“Tate McDermott had his fingerprints over all of it, he’s constantly relieving pressure and getting people onto the ball,” said Ferguson.

Former Wallaby Drew Mitchell added: “One thing allowing Tate McDermott to get out is the speed of ball he’s getting.

“There have been some really strong carries from the Wallaby forwards getting past the advantage line getting their bodies through, allowing Tate to snipe on a defensive line that hasn’t had the chance to set itself.”

Marika Koroibete made an instant impact on his return after missing game one through a ban after drinking past curfew.

“It would have been nice if he’d called it at curfew the week before,” Mitchell said.

“We know the class of Marika Koroibete. It shouldn’t be a surprise but each time he’s out there we marvel at him, everything he does he throws himself into it.”

McDermott’s try just before the break made the gap just six points and he was lively in the opening minutes of the half, before Australia squandered a golden chance to go ahead.

With Savea sent to the sin bin Paenga-Amosa’s delivery from a lineout was off course, letting the foot off New Zealand’s throat. A second intercept try was plucked out of the Eden Park air while Savea was on the sideline, and then Damian McKenzie thumped over a penalty from 57 metres to put the game out of the Wallabies reach.

The All Blacks weren’t finished, smashing a demoralised for eight tries including a devastating finale in the 82nd minute.