As the English squad for the tour of South Africa was set to be named soon, there was a lot of political pressure coming in. What happened next would have massive implications on South African cricket and English cricketer Basil D’Oliveira.

Who is Basil D’Oliveira?
D’Oliveira was a batting all-rounder who played 44 Tests and four one-day internationals for England between 1966 to 1972. Born in Cape Town of Cape Coloured descent in 1931, D’Oliveira’s hopes of playing for South Africa were dashed as the apartheid regime came into effect in 1948. As he was not even allowed to play first-class cricket in South Africa, D’Oliveira’s chances of playing international cricket were slim until a life-changing decision came.

When did D’Oliveira move to England?
With no future left in his cricketing career in apartheid South Africa, D’Oliveira flew to England during the summer of 1960 to play club cricket in Lancashire. He returned to England permanently with his wife Naomi a year later. Having lived under a racist regime for years on end, it was a culture shock for D’Oliveira to be treated equally in British society where he was not discriminated against based on his race at first.

After impressing in club cricket in England and gaining English citizenship, he signed for Worcestershire County Cricket Club in 1964. A year after signing for Worcs, D’Oliveira scored a century against Essex on his County Championship debut. From there on, he did not look back. As D’Oliveira kept on piling the runs in county cricket and was a handy seam bowler who had the knack of picking up wickets, an England debut was beckoning.

A year after making his county debut, D’Oliveira became the 432nd cricketer to play Test cricket for England. However, he would have to wait more than 12 months for his maiden Test century, which came against India in Headingley in 1967. As D’Oliveira impressed in international cricket in 1967 through performances versus India and Pakistan, he was well known worldwide during the 1968 Ashes. 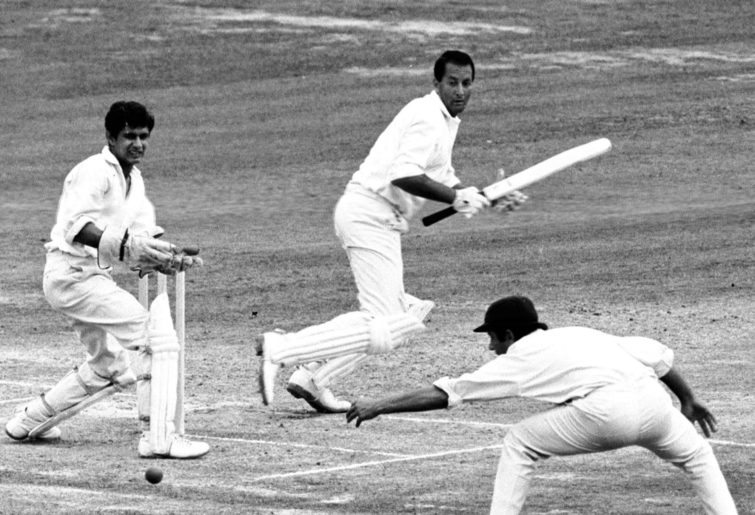 In the opening Test of the 1968 Ashes at Old Trafford, D’Oliveira impressed with a fighting 87 not out despite the English losing by 159 runs. However, things would take a turn for the worst. As the tour of South Africa was looming, there were reports that some members within the MCC were not quite approving of selecting D’Oliveira to travel as a squad member to South Africa – with high speculation it was due to D’Oliveira being of Cape Coloured origin. Despite being named in the squad, D’Oliveira missed playing the second Ashes Test. By the time the fifth Test was looming, he would be out of the England squad. And now, it had seemed that D’Oliveira missed travelling to South Africa with the England squad.

Yet, as fate would have it, he had one final chance. An injury to opener Roger Prideaux saw D’Oliveira called up to the England squad for the fifth and final Test of the 1968 Ashes. Scoring 158 at the Oval despite being dropped four times during his innings, D’Oliveira made an undroppable case for his selection to tour South Africa. His 158 helped England win the final Test and draw the 1968 Ashes at one apiece on 27 August. Soon after, the England selectors convened for a six-hour meeting to decide on who made the England squad to tour South Africa.

Things would take another turn as on 16 September, D’Oliveira was named in the Test squad – replacing injured bowler Tom Cartwright. Following D’Oliveira being named, Vorster was quick to ban him from entering South Africa. The South African PM went as far as saying that D’Oliveira being included meant that the team the MCC were sending represented the anti-apartheid movement. The MCC tried to persuade the South African government to change their stance on D’Oliveira, but to no avail. On 24 September 1968, the MCC called off England’s tour of South Africa. And it was a step that began the downfall of South Africa in international cricket under the apartheid regime.

All it took was for a cricketer of coloured descent from South Africa to haunt his nation of birth’s apartheid regime just by the possibility of his mere presence in South Africa as an opposition player. Vorster’s decision to ostracise D’Oliveira in the manner that he did would have massive consequences for the future. While South Africa were banned from many sporting events by 1968, their ban from international cricket in 1970 hit South African cricket hard before their re-admittance in 1991 following the end of apartheid in South Africa.

As for Basil D’Oliveira, he was robbed of playing Test cricket in the nation he had grown up in purely because of his race. In 2000, he was nominated as one of the top ten South African cricketers of the century – a testament to his cricketing abilities despite not playing for South Africa. Since 2004, all England versus South Africa Test series have been played under the Basil D’Oliveira trophy. His son Damian and grandson Brett have both played first-class cricket for Worcestershire with Brett still playing for Worcs. It has been almost ten years since Basil D’Oliveira passed away, yet the legacy and effect of the D’Oliveira affair lives on even after his death.