Six talking points for AFL Round 22: Time to put a line through Richmond?

Rinse and repeat: a wildly confusing season continues with a crazy penultimate round. One more to go – here’s a half dozen talking points.

The Tigers era is done, finished, complete
You would have never thought it would end like this.

Not at the hands of the GWS Giants, the team the Tigers had so comprehensively pulverised in the 2019 grand final. Not with Geelong, who they beat in last year’s abnormal decider, potentially the most consistent premiership contender.

And certainly not at the end of an on-again, off-again season in which the Tigers never really looked out of contention – always finding themselves back as a chance whenever written off.

But as Friday night’s clash against the Giants came to an end, so too did Richmond’s chance at a third consecutive premiership (and fourth in five years).

It is now just about mathematically impossible they can make finals (though it must be noted that the Eagles’ Derby loss yesterday helps that perilous endeavour), and the Tigers will find themselves in the wilderness for the first time since 2016.

It isn’t like this was entirely unexpected, as their worrying form throughout the season had most convinced that even if they were to make finals, they would likely have been negligible as a premiership contender at best.

Are Dusty and the Tigers done? (Photo by Quinn Rooney/Getty Images)

But to critique Richmond’s fall from grace is to also complement the Giants’ resurgence, for it was a win emblematic of the club’s push to surpass the expectations of them failing when it matters.

The Giants – without their barometer in Toby Greene – were clinical, evidently taking pleasure in consigning the team who embarrassed them so powerfully in 2019 to the 2021 dustbin.

For what it’s worth, Richmond are unlikely to need to worry about a ‘burning it down and starting again’ mentality. That’s a philosophy that might yet be utilised by one of their fiercest rivals…

By his own admission, the Blues’ performance won’t help David Teague as a coaching change beckons
For a club already in a (let’s face it, media borne) crisis, David Teague’s hold on Carlton’s coaching gig took another blow during a thoroughly disappointing performance.

It’s little wonder that Teague himself used the post-match press conference to articulate his admission that performances like Saturday’s “doesn’t help” his standing in his position.

For a sitting coach to be admitting that, it tells me that the club is reckoning with a greater internal strife that the Port loss was emblematic of.

Teague also mentioned that it was the first time this season that the Blues had lost a game to that extent. He is right, of course, but this is now the eighth consecutive season with no finals.

Carlton are a club that require no beating around the bush: despite positive signs here or there, there is something undeniably stagnant about the club.

And that means one thing: unofficially, the race for the Carlton coaching job does very much seem (according to the media that is creating the frenzy in the first place) to be down to just three prominent candidates, barring a dark horse aspirant: Alastair Clarkson, Ross Lyon and Nathan Buckley.

The former Pies coach by all accounts seems the least likely of the lot to pick up another coaching position.

Lyon’s no doubt a compelling pick, given his reputation as a stern and perhaps-too-honest coach might be a draw to a club desperately in need of a broader shake up.

Notwithstanding Lyon’s rough record with the Dockers late in his tenure there, there’s a Teflon quality to Lyon: immune to criticism, and survivable in the hot seat.

That’s a peculiar quality that the Blues might desire, lest they keep a rapid-fire hierarchy change stratagem all too often.

Clarkson’s linkage to the club goes without saying; the second he became available, he was in demand, particularly by those inside the Blues. His ability to develop the Hawks into a powerhouse would appeal, as would the way that team is competing in the later stages of this season…

Clarko’s resurgence confounds logic
Three in a row. That’s a remarkable record for a team that, headed into that decision surrounding their controversial coaching succession plan, had lost four games in a row and was beginning to make a serious run at the wooden spoon.

Alas, the club has rejuvenated after Alastair Clarkson’s confirmation that he would depart the club as the season came to a close.

They stunned the Lions, throwing a spanner in the works of that side’s top-four ambitions and then Clarko’s men then went on to hold off the Magpies (another side in the coaching calamity boat).

But their win on Saturday afternoon was comfortably the most impressive of them all, given the Doggies’ ladder positioning and the Hawks’ weakened midfield unit (especially so, given the unavailability of Jager O’Meara and James Worpel would have been fair loss regardless of the fixture).

Clarkson’s outfit managed to do what they’d done in the prior fortnight: getting on top of the midfield battle with relative ease and then managing to hold off a more highly fancied club.

The Hawks’ resurgence of form this late in the season is a bit of a surprise. The Hawks have too often been flat this year, with Clarkson’s coaching style approaching a metaphorical ‘use-by’ date.

But reminiscent of what he did against the Lions, Clarkson managed to stifle the Doggies’ midfield run. More than that, though, Clarkson’s got the entire cohort behind him.

Life at the Hawks hasn’t looked this bright in a fair while.

Freo snap a Derby losing streak in style
For the Dockers, the only thing better than victory in a Derby is ruining the finals chances of their closest rivals.

Or celebrating the club’s games record-equalling David Mundy. Or by doing it all without three of the team’s best players. For the Dockers, that all happened at once on Saturday afternoon.

The first quarter especially was an illustration of just how good the Dockers can be. Daring, fast and unusually accurate, Freo – to borrow an overly utilised phrase – drew a line in the sand to further cement their development this year.

It was also unsurprising to see the Dockers fade out through the middle of the game. While the frenetic first term pace was never going to be sustainable, a fade out like this has been a feature of the Dockers for much of the year.

One thing that hasn’t tended to happen too often is the side staying in touch when being chased. Despite the Eagles managing to storm back into the contest, the Freo side (missing Andrew Brayshaw, Nat Fyfe and Michael Walters) managed to take control of the contest.

It was not pretty, but it was a level of desperation which showed the Dockers were playing for Derby pride. But it may yet end up being a lot more than that.

The Dogs’ midfield efforts leave something to be desired
Most of those reading this would already know about the Doggies’ aforementioned loss to Hawthorn, but the clash was the second consecutive time the Doggies blew a game they were heavy favourites to win. Admittedly, last weekend’s loss to the Bombers doesn’t look as damaging in hindsight given Essendon’s form.

Damaging losses or not, one thing that is becoming an issue is the Doggies’ flat midfield efforts.

I understand the return of Josh Dunkley and Adam Treloar from injuries, but the fact that the Bombers and the Hawks have both managed to eviscerate the Dogs in the middle – they were smashed in clearances (centre of otherwise) by the Bombers, but a youthful Hawthorn outfit embarrassed the Bulldogs, winning ten of the 14 centre clearances. 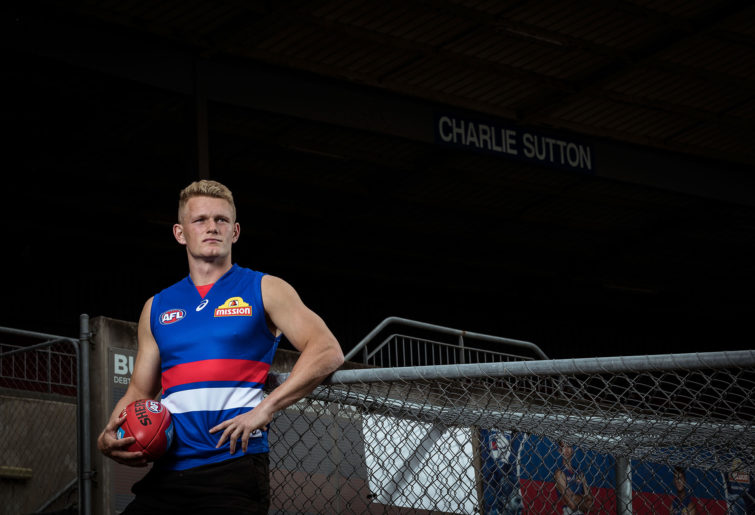 They barely have time to recover: they face one of two finalists that are on the rise next week – Port Adelaide – before finals.

And just quickly, a final round fixture the AFL could’ve only dreamt of
Let’s have a look at the following games for next weekend, in two groups. The ‘fighting for top four’ group: Geelong hosting Melbourne, the Western Bulldogs hosting Port. Both have huge implications on the make up for the double chance contenders.

Meanwhile, in the ‘fighting for finals’ pack, clashes between Essendon and Collingwood, Brisbane and the Eagles and St Kilda hosting Freo. All are must watch clashes, and all are certain to have implications on the eight.

If you were Gil McLachlan or Travis Auld, you’d be patting yourselves on the back given how fortuitous it was to get such great final round clashes.

Everybody gets a turn
Adelaide Crows – Safe from the wooden spoon regardless of their upcoming result against North, but will finish with much worse form than the Kangas.

Brisbane Lions – Beating West Coast and having the Dogs lose will open up the chance to sneak into the top four, but it’s bound to be a difficult ask.

Carlton Blues – Marc Murphy’s career is over, and it’s likely Eddie Betts will join him in retiring as the club finishes up the season. Two fantastic players.

Collingwood – Can be a genuine pain in the backside for the Bombers if they upset that team during next weekend’s encounter. Would make a Pies’ supporter smile, you’d think.

Essendon Bombers – Win against Collingwood, and a finals slot – seventh or eighth – will be theirs. No pressure.

Fremantle Dockers – Caleb’s Serong’s last term goal a genuine chance at Goal of the Year. Not bad for an afternoon capped off by winning the Glendinning-Allen medal.

Geelong Cats – Now a bonafide premiership contender, yet they won without looking particularly impressive. Yet. Again.

GWS Giants – Leon Cameron would crash the Ferrari big time if they lose to the Blues next weekend. Unlikely, but simultaneously wouldn’t surprise.

Hawthorn Hawks – A fantastic chance at knocking off Richmond next weekend. They do that, and they’ll end up with seven wins. Not awful given some of their form this year.

Melbourne – Unbelievably big clash against Geelong next week. Win, and the minor premiership is there’s. Lose, and they could slip down to third.

North Melbourne – The least-worst wooden spooner in a fair while.

Port Adelaide – Going 23 points down to a messy Carlton a quintessential Port move, but surging back past to an almost triple-figure win an uncharacteristic yet welcome result.

Richmond – Could they make finals? Yes, thought they’d need to beat Hawthorn and have Freo, West Coast and Essendon all lose. Technically possible – but, no, they’re done.

St Kilda – Oh so close. Gone under the radar but they remain a chance at finals, but it would absolutely be a bridge too far.

West Coast Eagles – Shellshocked in the first term but rallied for much of the game. They’ll be rueing that Derby for a long while.

Western Bulldogs – What’s that old adage? “If you don’t have anything nice to say…”