'The rules are ridiculous, with unbearable outcomes': NRL inconsistencies not all the referees' fault

Referee bashing is as old as sport itself. This week saw a fightback of sorts from the NRL’s head of football, Graham Annesley.

He defended the controversial decisions and cast the ‘errors’ in contrast to the average of 20 handling errors, 60 missed tickles, 30 ineffective tackles, and ten line-break concessions by teams.

It’s a laudable attempt to defend easy scapegoats, forcing teams to face responsibility for their shortcomings.

Frankly, it’s been a long time coming. The idea of officialdom’s infallibility went with the introduction of video replays, exacerbated by captain’s challenge.

That’s not to lament the loss of perceived untouchability. In nearly any walk of life, greater scrutiny results in improved outcomes. Providing a full-time environment in which decisions can be reviewed by peers and qualified observers has yielded higher quality referees.

The challenge is keeping up with the play, more particularly the ever-changing rules. Much criticism has been dished out owing to high challenges, even with minimal force. Easts recorded a narrow victory over Brisbane after Tom Flegler’s ‘illegal’ scrape with Rooster Sitili Tupouniua. 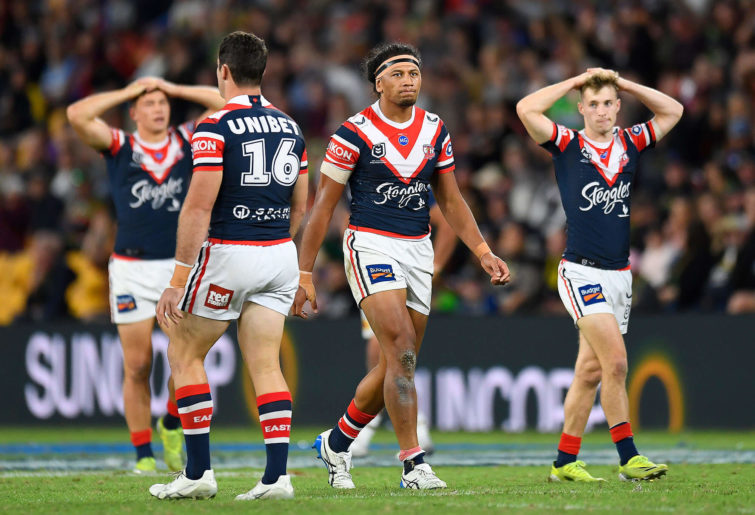 There were predictable calls of the game going soft, comparisons to Oz Tag, and ‘better in my day’ opines. But we’ve been here before. There was derision at the Magic Weekend card-fest owing to the new high-tackle regulations. Nothing has changed in that period. Such controversy only receives oxygen because of the outcomes of rulings (21-20) and managerial lamentations.

Such edicts have many detractors. They were introduced without trials in the lower leagues, or indeed without RLPA consultation. It was an act of egregious dictatorial rule by Peter V’landys, a behavioural pattern to be repeated again and again (much to the chagrin of World Cup stakeholders).

In short, don’t blame the officials for decisions all the time. Blame the rule-makers.

Issues of contact have only been heightened by the six-again overhaul. Players come to the end of the game far more fatigued and thus struggle to adjust their actions to the new diktats. This lack of joined-up thinking seriously hampers the spectacle, and only results in blame being directed at the wrong people.

Annesley also felt the need to issue judicious explanations over similar issues. Over the Nathan Cleary’s wayward shoulder, he explained that the Panther “decide[d] he’s not going to go through with the tackle in the traditional sense and turn his body sideways”. He contrasted this with a definitive shoulder charge, involving “charging at an opposition player with their shoulder”.

Many of the rules are ridiculous, with unbearable outcomes. The loose wording of the laws also leaves too much open to interpretation and the worst possible accusation – lack of consistency.

This isn’t isolated. Earlier this month, Warrington beat Leeds with a ludicrous video verdict. Wire’s Josh Charnley appeared to be held up in-goal, but referee Chris Kendall sent it up as a try. Replays demonstrated what he could not observe – that there was no grounding – but insufficient evidence led to an equalising try being awarded.

It’s another incident of blaming the messenger for the errors of the penman. Fans would be far better arguing for a 50-50, or a lowering of the threshold to overturn on-field calls.

It would achieve far more than castigating the game’s arbiters. The decision to drop video referee Robert Hicks in the aftermath was cowardice on the part of the RFL, deflecting blame from their poor legislative literature onto an easy target.

Annesley hit the nail on the head when he noted the stress that coaches would be under as the play-offs approach. But during a 25-round regular season, the idea of refereeing choices making an impact is desperate.

The play-off system makes it difficult to care about week-to-week fixtures. But the regular season guarantees that decisions, be they for or against your team, will generally average out throughout the year.

In most cases, head coaches would come out all guns blazing in defence if they felt that their players were being unfairly scrutinised. It’s no surprise that the ‘boss’ of the referees has sought to defend his workers from unfair criticisms.

The issues go above the referees themselves, to the decision makers at the top. But it’s far easier to hurl abuse at the whistle-blowers than the ultimate wrongdoers.