'He's a freak', 'just unbelievable': Even the Kiwis are gushing about Michael Hooper's form

The Wallabies might have folded in straight sets to the All Blacks over the the past two weeks of Bledisloe Cup action, but captain Michael Hooper has won high praise across the pond for his superb form and leadership.

Hooper was outstanding in all three Tests as Australia edged France earlier this season and while the assignment was tougher against New Zealand, his standards have barely dropped, being among the Wallabies’ best on both occasions.

“He’s just a freak. He’s such a good player to watch,” Parsons said.

“I think [former Wallabies hooker] Jeremy Paul, during the week before this Test match, said ‘If he was playing in any other era, he would be held as one of their best players ever’.

If he was playing in a winning side or through that era of Larkham and Gregan, like Jeremy Paul was saying…

“He’s just unbelievable. His skillset, his ability to offload in contact, work off the ball.” 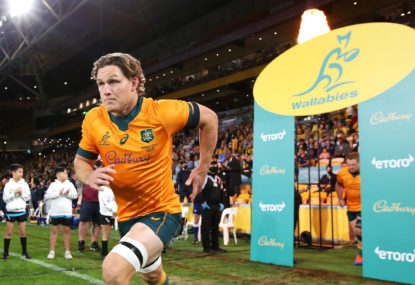 Michael Hooper of the Wallabies leads his team out onto the field during the International Test Match between the Australian Wallabies and France at Suncorp Stadium on July 17, 2021 in Brisbane, Australia. (Photo by Jono Searle/Getty Images)

Hooper has won plaudits for his ntensity and leadership all season.

“He’s an absolute machine,” said Will Genia in a column for The Roar.

“You run out of words to say how good he is – constantly involved in the game, always having an influence whether it’s at the breakdown, in defence or his ball carrying.

They’re a completely different team depending on whether he’s in or not in that side.

Being there at the end to score that last try – that’s always been his game. He’s such a consistent performer at elite level, has a big engine and never stops.”

Parsons has been impressed with Hooper’s growth as a leader.

“His ownership – if you listen to him after the game, he takes a lot of ownership on himself and where he can be better.

“He never points fingers. Those are the sorts of blokes that you want to follow and you want to get into the trenches with. His level of play on the field is quality. What he’s offering off the field, in terms of leadership, I think’s massive as well.”

“If you’re an Australian supporter and obviously pretty disappointed with how the result went, you’ve got a captain at the front of it saying ‘We need to be more accountable, I need to be better, we need to be better’, then you kind of accept that as a supporter,” Hall said.

“Dave Rennie’s talked around a lot [how] they want to win – they’re not there just to participate.

“As a captain, you can be able to give that vulnerability and being able to show your fans and, more so, your group as well, that this is not good enough but as a captain I’m going to take this accountability and somewhat take the heat off the players that are probably going to be getting it a bit in the media.”