In my opinion, Jon “Bones” Jones (26-1) is the greatest fighter to grace the UFC octagon.

His resume in mixed martial arts is quite simply unmatched and having dominated the UFC light heavyweight division for nearly a decade, you just knew something greater was on the horizon.

That’s when he sent the MMA world into a frenzy as he announced that he relinquished his light heavyweight championship back in August, 2020. He stated that he would finally make the jump up to conquer heavyweight glory and become a champion in two different weight classes.

Describing his choice as exciting would be an understatement.

Fans have patiently waited for the youngest champion in UFC history to back up his words of intent, but the 34-year-old and UFC president Dana White have not been able to come to terms on a deal to get him back in the cage.

This has left the MMA fan-base increasingly frustrated and it did not help matters when Jones said he wanted more than US$10 million (A$13.8 million) to fight current heavyweight champion Francis Ngannou (16-3) and the UFC president did not entertain that figure.

I believe Jones has the perfect opportunity to come back in early 2022 given the current state of the heavyweight division, however, it should not be for the UFC gold belt that everyone hoped for.

Given the fact that the undefeated Ciryl Gane (10-0) recently defeated knockout artist Derrick Lewis (25-8) in dominant fashion to earn the interim heavyweight strap, the Frenchman will no doubt be matched up to fight his former training partner Ngannou for the undisputed championship in the coming months.

Jones has not fought since February 2020 when he defeated Dominick Reyes (12-3) by unanimous decision in a very close fight that many actually believe he lost.

There is definitely a sense that Jones needs to prove some of the doubters wrong and that is why he needs to fight the former champion Stipe Miocic (20-4) who is arguably the greatest heavyweight of all time. 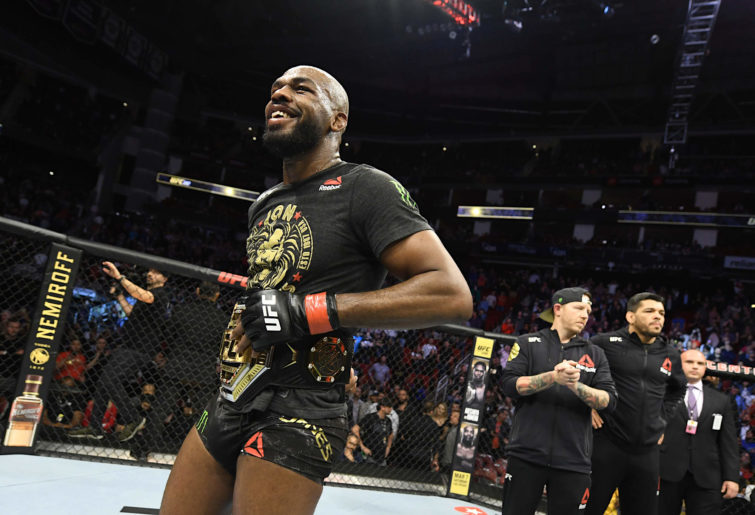 The match-up makes perfect sense and it has been a dream fight that MMA fans have talked about for years, especially when you take into consideration that Miocic needs to bounce back after he just lost the belt to Ngannou by way of a vicious KO in their second outing back in March and Jones needs a big name for his introduction to heavyweight.

It would be an intriguing bout when you consider what Miocic has done in the sport, specifically the memorable trilogy series he came out on top of against the now retired and future Hall of Famer Daniel Cormier (22-3).

With all of that being said, Jones cannot afford to keep sitting on the sidelines and wait for the UFC to give him a massive payday because Dana has already proved that he will not take the bait to make the fight with Ngannou.

In saying that, though, Dana could change his mind. The focus needs to be shifted to Miocic, and what better way to stamp your authority in your new weight class by defeating the fighter with the most heavyweight title defences in UFC history? It would be another feather in Jones’ illustrious cap.

Having a fight before facing the champ would give Jones some much-needed ring time in the octagon to feel the extra weight before possibly facing off against the scariest competitor that the UFC has ever produced (moreso than Brock Lesnar).

By no means does this indicate that Jones is not good enough to beat Ngannou right now, but his inactivity over the last year-and-a-half is a slight worry.

We know that Jones is probably the most well-rounded fighter in the organisation and his diverse skillset in his standup, grabbling and wrestling pose many obstacles for the Cameroon born fighter, who is looked at as someone who can only prevail using his devastating power.

It feels like the fight has lost its hype since we all thought the match-up was going to happen following the conclusion of Ngannou’s championship win nearly five months ago and the fact that Jones’ name was mentioned as a potential first title defence that night.

The fight is definitely not dead and buried and the attention can slowly start build back up if Jones actually returns.

You have Ngannou and Gane fight for the undisputed belt and not too long thereafter, you have Jones make his long-awaited return in his first heavyweight fight against the most decorated UFC heavyweight in Miocic.

If Ngannou and Jones pass those tests with flying colours, then all signs point towards one of the greatest fight in UFC history: Ngannou versus Jones.