Milford looked a lot happier and a lot fitter on the field and he played like a happy NRL player but also he played like he had no expectations on him, which is good to see because the future Rabbitohs playmaker put on a show for the Broncos fans up at Suncorp.

Milford finished the game with two try assists which came early on in the second half, with Broncos winger Xavier Coates scoring a double. One try came off a high bomb from Milford and some magic gave Coates an easy passage to score in the corner for the other.

Milford scored the try in the 71st minute which sealed the win for the Broncos.

I felt so bad for Warriors fullback Reece Walsh because his goal kicking was so off today and it wasn’t even funny. The young custodian had five shots at goal and only managed to convert one of those kicks and had a chance to kick a two-point field goal in the dying seconds but his kick swayed left.

Broncos halfback Albert Kelly continued his very impressive form for the Broncos after scoring a try from a Tesi Niu kick. The Broncos fullback was very good with his 202 run metres and six tackle breaks, but he did have three errors.

Milford ran for 144 metres, broke five tackles, had one linebreak, two linebreak assists, two offloads, 423 kicking metres and only the one error.

Payne Haas is the best prop in the game right now and the NSW representative once again ran for over 200 metres, broke six tackles and forced his way through the line once with one offload as well.

Prop Addin Fonua-Blake was one of the Warriors’ best, making 38 tackles and having the most run metres in the game with 207.

The back five for the Warriors all ran for close to or just over 150 run metres, with only three of the Broncos back five running for over 100 metres.

The Warriors’ season is now officially over – they won’t be playing finals football in season 2021, but with the players they have obtained for next year, they can definitely be a threat in season 2022. 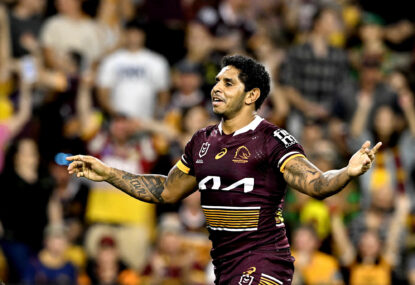