Let me start by saying that I’ve always been a Latrell Mitchell fan, and that I believe he is one of the best footballers in the NRL at present.

No other player can emulate what he brings to the game – the destructive running power of a forward, the silky passing skills of a back, big hitting defence, a mix of arrogance and self-belief, speed and footwork, the ability to break tackles seemingly at will, and great game vision.

But despite his unique set of skills, I believe that Mitchell is a very ordinary fullback. To justify that statement, let’s see how he compares to the other top line fullbacks in the game and how he performs against the KPIs for the position.

The role of the modern fullback is far different to what it was ten years ago. These days, the fullback has a much bigger part to play, and is one of the most important positions on the field. Some of the key roles for the modern day fullback are:

1. Making the extra man in the back line in attack
2. On-line defence in your own red zone
3. Organising the defence in front of you
4. Taking the increasingly difficult high balls
5. Bringing the ball off your own line
6. Cover defending the edges to deny the efforts of the acrobatic wingers
7. Providing another attacking option around the ruck

That’s a lot on just one player’s plate, and no wonder the top-shelf fullbacks demand big dollars.

The role these days requires that the fullback be the fittest man in the team as he is going to cover the most distance, whether with or without the ball, week in and week out. A club just can’t expect to win a premiership without an ace in the No.1 jersey. 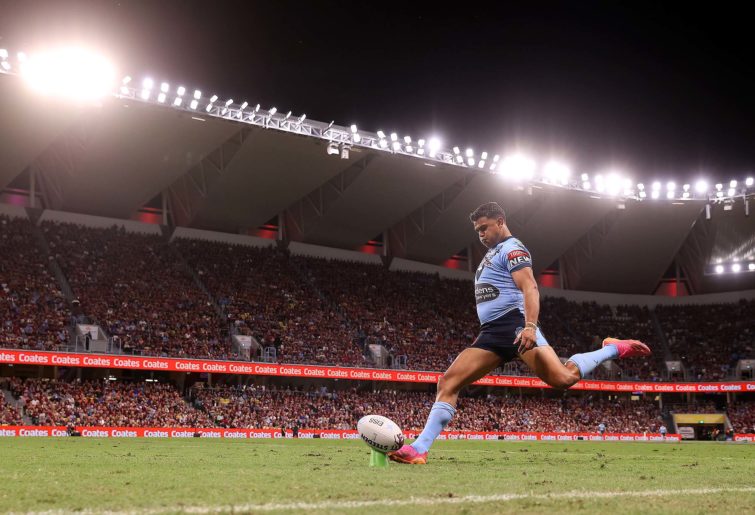 So, which of the above tasks does Latrell perform well?

There’s no doubt that he is a master of appearing in the three-quarter line at the right time and place in attack, and South’s success in putting wingers in for countless tries is testament to that. He’s also a lethal one-on-one defender, particularly when defending in the line, and can bring down the biggest opponent single handed.

It’s hard to judge his defence organisation skills, but he has to get the benefit of the doubt here, as only Melbourne and Penrith have had significantly less points scored against them than Souths so far this season.

So he easily ticks roles 1, 2 and 3 in my view, and is probably the best in the NRL at both 1 and 2, but I believe he struggles with the rest.

Let’s face it, Mitchell is not good under the high ball, and gives the impression that he’d much rather have one of the wingers take the catch wherever possible.

Contrast that to a fullback like Clint Gutherson, who seems to want to take every high ball coming Parramatta’s way, and who will sprint to get into position to do so.

Once the opponent’s kick has been taken by Souths, Mitchell will generally leave it to his wingers, and maybe a centre, to bring the ball back off their line. He’ll usually position himself at either dummy half or just behind the ruck for the first set, and rarely runs the ball himself at that end of the park. What a waste.

Contrast this with a player like Tom Trbojevic, who will get heavily involved in these recovery sets and sometimes run the ball with great effect more than once in the first set coming off Manly’s line. He really wants the ball.

There’s no doubt that Mitchell is a strong one-on-one defender, but he leaves a lot to be desired as a cover defender. He either doesn’t have the fitness, acceleration or desire to constantly patrol the edges in defence, with the same effectiveness as, say, James Tedesco, who will more often than not be there to pull off that last ditch tackle.

Finally, Mitchell doesn’t provide as much around the ruck as an attacking option as players like Ryan Papenhuyzen, Tedesco or Trbojevic, he rarely takes the ball as a first receiver, and prefers to play much wider in attack.

Perhaps this is as a result of the dominance of the South’s playmakers in Adam Reynolds and Cody Walker, or just a feature of Wayne Bennett’s game plan, but it seems like a missed opportunity.

Latrell Mitchell is the best centre in the game, and will probably be picked there in representative teams for years to come, but he’s a long way from being the top fullback, with three or four players in front of him.

I see him as a centre trapped in a fullback’s jersey, and this may well be Souths’ Achilles heel in this year’s final series.