This Saturday night the Melbourne Storm can enter the record books with a record-breaking 20th consecutive victory when they face the Parramatta Eels at Suncorp Stadium.

Not even the retirement of their legendary captain Cameron Smith on the eve of the start of the season has slowed them down, with Harry Grant slotting into the hooking role seamlessly following one season with Wests Tigers on a loan deal last year.

Fullback Ryan Papenhuyzen has also missed a considerable portion of the season due to injury, but his absence hasn’t affected the side either.

Last week the club survived a scare from the Gold Coast Titans to win by 34-20, joining the Sydney Roosters class of 1975 in winning 19 consecutive matches.

They had trailed 10-0 after 15 minutes and then 16-12 at halftime before scoring four tries to one in the second half, two of them by Bulldogs-bound winger Josh Addo-Carr, to keep their winning streak going and put one hand on the minor premiership in the process.

While Craig Bellamy’s side will start hot favourites against the Parramatta Eels in Brisbane this Saturday night, they will be mindful that the blue-and-golds were one of just two teams – the other being the Penrith Panthers – to get the better of them this season. 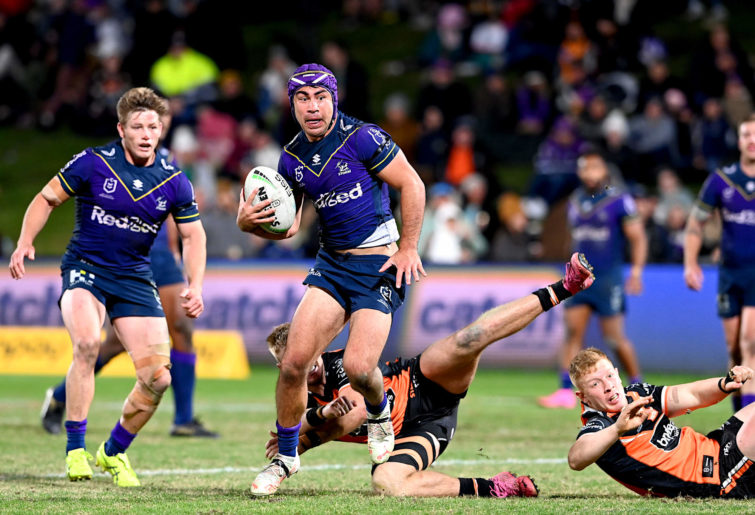 The Round 2 clash at Bankwest Stadium saw the home side win 16-12, with that result seeing the Eels start the season 2-0 while the Storm, two games into the post-Cameron Smith era, dropped to 1-1 after they’d beaten the Rabbitohs at home in Round 1.

But the fortunes of both clubs have changed significantly since, and while the Storm lost their next match against the Panthers, they have gone on to win their next 19 games in a row.

They have broken numerous scoring records along the way, including scoring 40 points or more in 11 matches this season and having the largest points differential in Australian rugby league history at +499.

Their current points-for of 777 is the most by any team after 22 matches, and they are just 62 points off the 839 points scored by the Parramatta Eels in 2001 – though that season saw every club play 26 matches and no split rounds for byes.

Additionally, Josh Addo-Carr became the first man since 1950 to score six tries in an Australian rugby league premiership match, doing so against the South Sydney Rabbitohs in the Round 9 game the Storm won 50-0.

No wonder why Bulldogs fans can’t wait for his arrival, with the club already doomed to finish with the wooden spoon, its first since 2008.

The Eels, meantime, have struggled in recent weeks, losing five of their past seven matches to drop out of the top four with two rounds of the minor premiership still to play.

Brad Arthur’s side did, though, put an end to a horror month by beating the North Queensland Cowboys last Saturday night, with Mitchell Moses enjoying a welcome return to form after being slowed down by a back injury suffered in his Origin debut last month.

It has put them three wins clear of the seventh-placed Newcastle Knights. In a normal world, they would be guaranteed a home final, but with the entire finals series set to be played in Queensland, where they finish will be irrelevant.

Preceding the win over the Cowboys were humiliating defeats to the Sydney Roosters, South Sydney Rabbitohs and Manly-Warringah Sea Eagles, with those three clubs overtaking the Eels on the ladder as a result.

Long-suffering fans hoping that it was a turning point in their team’s run to September stand to be mistaken as they face a club that has given them more hell than you could ever imagine in the past 12 years. 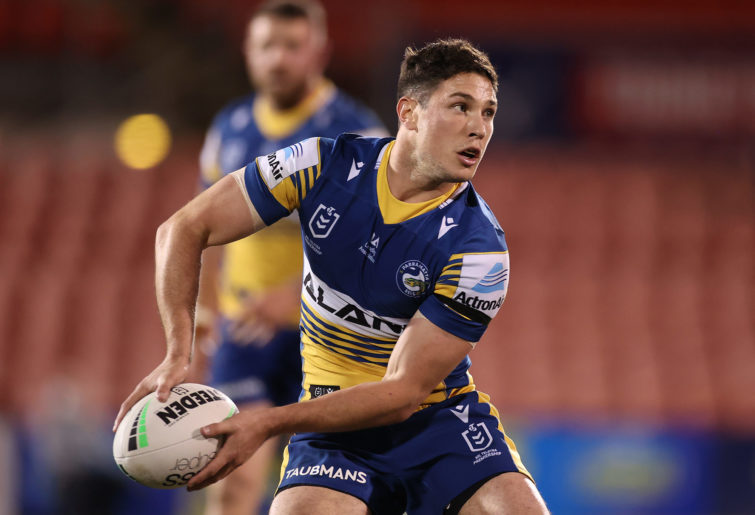 While the Eels have suffered several heavy defeats against the Storm in recent years, including copping a 64-10 loss in Magic Round two years ago, the one loss that continues to anger their fans is the 2009 grand final.

Why? Because six months after the Storm lifted what was supposedly their third premiership title in front of a pro-Parramatta crowd at Stadium Australia it was revealed that the Victorian club had cheated the salary cap over a four-year period starting in 2006.

That 2009 title as well as the 2007 title and a hat-trick of minor premierships were thus wiped from the record books, while the club was also forced to return $1.1 million in prize money, fined $500,000 and were sentenced to finish the 2010 season as wooden spooners.

In the Round 13 grand final ‘rematch’ that took place at the since-demolished Parramatta Stadium that year angry Eels fans unleashed their feelings towards the Storm players, with signs in the stands saying “Grand final forecast: No Storm” and “Go home you cheat$”.

But as the saying goes, there’s no use crying over spilt milk.

Back on topic now, and the present-day Eels will brace themselves for the ultimate challenge that is facing a Melbourne Storm side that has clearly been the benchmark team of 2021.

At stake for the Storm is a record-breaking 20th win, which would cement the club as the greatest of the NRL era (1998 to present) and have their finals rivals running scared.

Should they beat the Eels at Suncorp Stadium as expected on Saturday night, another four wins in succession would take them to back-to-back NRL premierships for the first time in club history.

It would be the second consecutive time a different club has won back-to-back titles, after the Sydney Roosters did so in 2018-19.

So the question remains: are the Eels the team that is capable of putting an end to the Storm’s winning run, or will Craig Bellamy’s side brush them aside and complete the grand slam of beating every club this season?