The 100th Test between the All Blacks and the Springboks is up in the air.

One hundred years ago the two sides faced off in Dunedin. New Zealand defended home turf by 13-5. This year’s centurion Test was sited in Dunedin again, but it may be played in Brisbane or Cape Town or Dubai or Paris or London. Or not at all.

A century of Springbok-All Black Tests has given the two rivals and the rugby world at large so many great moments, deep controversies and rugged competition. Over the long arc of time the Boks have won one of five Tests against the old foe in New Zealand – the best strike rate of any nation – and the All Blacks have won half of their Tests in the Republic for a 6-10 overall margin, a Bok-beating record easily eclipsing any team.

Thus this is a lopsided rivalry, even if the No. 1 ranking – officially and, before that, unofficially – has for the most part been held either by New Zealand or South Africa and no matter if both hold three World Cups, with the Boks having two fewer attempts. The gap has been real, and we all know it. The All Blacks are the better team over the hundred years – the best team in rugby history. The Boks are a distant second and only just ahead of the pack. 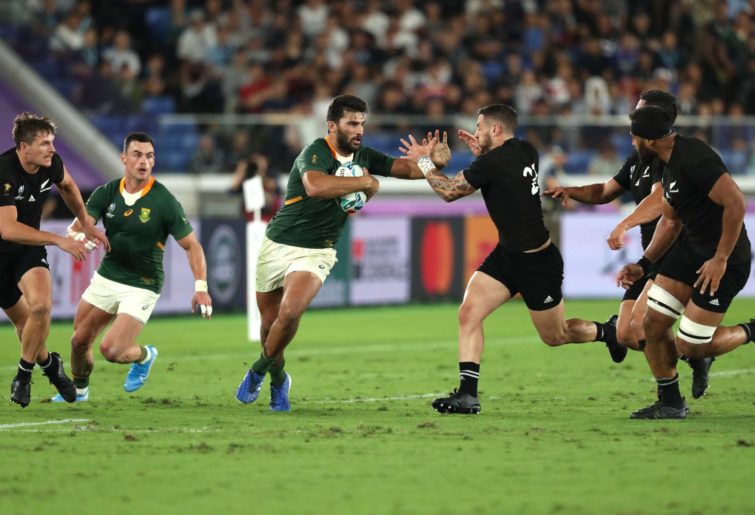 But lately the renaissance of Bok rugby has reignited the match-up.

If you take the last 16 Tests of both heavyweights and eliminate matches against amateur sides (Namibia, Canada, Tonga, and Fiji), we find these razor-thin margins:

Nine of those 16 Tests for the All Blacks have been against the hapless Wallabies, but both sides have played England and Wales once in that time, with very different outcomes. The fact that South Africa faced the British and Irish Lions three times within the last 16 Tests balances out the two Tests against Japan. Argentina is the most common opponent.

Two of the last 16 Tests – remember, I am deleting amateur sides from the list – have been head to head: a 16-16 draw and a 23-13 All Blacks win in the pool game of the World Cup. Nobody would call that dominant, particularly given that the pool game turned on two spilled kicks by the Boks. By the way, in that match the Kiwis kicked 30 times from hand – six more than the Boks, who had 59 per cent of the territory and 53 per cent of the possession.

Each side has managed only single-digit win streaks against the other (eight straight wins for New Zealand and six for the Boks).

With all the dross and gloom and dire news of 2020-21, the Test the rugby world needs is Boks-All Blacks.

In one corner we have by far the best attacking team in the world. In the other corner, the undisputed king of defence.

Even if that is overstated – look at the margins in the last 16 Tests – the fact is this a world champion and Lions series victor that is not seen as the true No. 1, while the challenger is seen as the best, still, until the Boks can prove it on the field.

Style match-ups make fights, and this is the one we want.

New Zealand Rugby, please give it to us. Wherever. I think the Boks will play in a car lot outside Wigan. Without water carriers. Maybe not even a ref.