The bye is out the window and the AFL finals begin this weekend!

Before we get underway, however, congratulations are in order. On his third year on the panel, Liam Salter has taken out the crown after his five points was enough to hold off myself and Dem Panopoulos.

We’re still tipping all the way until the end of the season, however.

It’s one of the most open finals series in recent memory. In my books, there is no clear favourite for the flag and anyone from first to sixth could genuinely lift the trophy.

Bring on the finals!

These are some very tough qualifying finals to tip.

If you’re having déjà vu, it’s not just you. Port Adelaide and Geelong played the first game of last year’s finals series too.

The Cats had convincingly knocked off the Power in their only home-and-away meeting in 2020 and also came into that fixture as the lower-ranked side.

Last year, I correctly tipped the Power to put that loss behind them, but this year I can’t bring myself to do the same.

Port played a great game to down the Bulldogs in Round 23 but, to be very technical, still haven’t defeated a top four side this season.

The Cats looked sublime for three quarters against Melbourne before falling off a cliff. I expect them to turn up for all four quarters this time and notch the win.

One streak will be broken in Saturday’s elimination final. Sydney have never defeated Greater Western Sydney in a final, but are also the only club to have played in Tasmania and never lost.

Injury concerns in the midfield – and that history of finals farces against the Giants – do have me nervous about the Swans’ chances, but the 14-point gap (and 20.2-percentage gap) should say it all. Sydney to get it done. 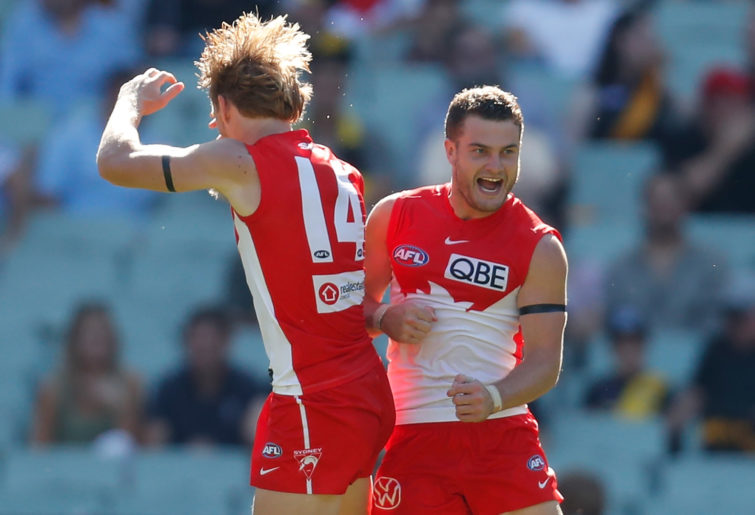 Props to Melbourne for digging deep at the Cattery in last week’s epic triumph. For a club that has long been criticised as mentally fragile, that could be a history-altering win.

The challenge is to recreate that in finals now and they’ll have to be switched on against a Brisbane side ready to strike.

The Lions have had their share of finals heartbreak in recent seasons and could be poised to break through and win the premiership, but playing the Demons at the Adelaide Oval is arguably a toughter task than at the MCG.

I’m already keen to back the Lions in a preliminary final, but I reckon they’ll have to travel there the long way this time.

Finally, while I give a lot of credit to Essendon for the season they’ve put together – I’m not buying the idea their recent form makes them a chance.

The ‘honour roll’ of teams they’ve defeated since falling to 6-9 is; Adelaide, North Melbourne, the Western Bulldogs (against whom they won despite registering two fewer scoring shots), Gold Coast and Collingwood.

They deserve their spot in the eight without a doubt, but I’d be very surprised to see their finals drought broken this season.

The last two seasons, the Dogs have won three in a row heading into the finals and lost in the first week. This year, they’ve lost three in a row so, beyond a shadow of a doubt, they’re due for a win.

The last round of the home-and-away season was as much of a rollercoaster as the entire season was. Bad luck if you were busy for the first two days of the round and wanted to settle in for good footy on the Sunday.

It was all worth it for eight clubs though, to reach this point in the season where anything can happen, if they truly believe.

We kick it off with Port Adelaide as the only team able to legitimately host a match after consistency landed them a top two spot.

It’s not a terrible spot for the Cats; seven of the last nine games between these two teams have been played at the Adelaide Oval. Tom Stewart’s absence has really taken the Cats down a couple of notches, but I think they could just muster up enough to sneak home here.

There’s no exposed form at the venue for the Swans or the Giants, so this may come down to personnel. A quicker style of play tends to work better at the old York Park, teams that try and control the ball too much tend to need to go boundary side, where the wind takes the ball out of bounds on the full, and it causes headaches.

Gut feeling is the other qualifying final may well be a grand final preview with two really good teams fired up at the same point in the season.

The Demons have a much better record in Adelaide than the Lions do, and they have a bit to prove as minor premiers. Some are still strangely barracking for a Melbourne capitulation but this team has been the best all year and will prove it.

I don’t think the Bulldogs would love hosting their home final in Tasmania, particularly in the current form they’re in. Essendon is running over the top of teams and have a fearless mindset heading into the finals, which is extremely dangerous.

It’s hard to imagine a team full of established stars like the Bulldogs will just roll over in a final though. Their fans have suffered enough in the last month.

Port Adelaide’s Round 23 win has sent them into finals on a high note, and they’ll have memories of winning this exact fixture twelve months ago. They’re up against a fascinating Cats side. It’s a deeply talented one that belies the awful way in which they capitulated against the Dees and lost the minor premiership.

It is also one, much more relevantly, that defeated the Power earlier this season – one of Port’s three losses (against zero wins) to top four sides in 2021. Geelong seem the sensible tip, but you can never, ever count out the Power – last week’s win proves that – and, given they’ll have a crowd behind them, I’m backing the déjà vu win.

Saturday’s Launceston-Battle of the Bridge encounter is truly impossible to tip. The Swans have won seven from their last eight, are the season’s true surprise packet and have had a cruisy run into finals with bruise-free wins over the Suns and North.

‘Bruise-free’ can’t be used to describe the Giants’ late run, given their trio of competitive victories – including one over Geelong.

This is the third time these sides have met in finals – with the 2016 and 2018 encounters won by the Giants. That may be history, but the reality is despite the Swans form this year, the Giants are a more experienced finals side. Despite the Swans gunning for a fairytale premiership, Leon Cameron’s men should repeat history with a win in Tassie.

The Dees and Lions clash is a perplexing game. The Demons were phenomenal in their come-from-behind victory over Geelong and are deserving minor premiers. But Brisbane’s late season run was something to behold, and last weekend’s game was perhaps the most thrilling 38-point game of all time.

The Lions have set themselves up beautifully, but the Demons have surpassed every expectation and then some this season. It’s going to be close, and the Lions have tended to win when they’re underdogs away from the Gabba, but the Dees are an irresistible tip and I’m backing them.

Sunday’s clash is the Western Bulldogs hosting Essendon in Tasmania. The hosts have had shocking form of late, losing their final three home-and-away season clashes before watching as the Lions won themselves a top four spot at their expense. It’s a total contrast at Tullamarine: the Bombers prevailed in the dogfight of teams itching for finals, with big wins over Collingwood, the Suns and the Dogs themselves providing an imperfect tune up for finals.

It’s the win over the Dogs that holds the key. If that can be repeated, the Dons have a real shot here. The Dogs, though, are a bloody good team when switched on, and finals are just the opportunity to be just that.

If there’s ever a year in which the Bombers will finally win a final, it is this one, and I’m tipping just that. Dare to dream, Dons fans.