Capturing hearts and causing damage: The Sydney story of 2021

This has been a magical season for the Swans.

Even after the shockingly fantastic start to the season, beating Brisbane and Richmond away from home within the first three rounds, Sydney’s 15-win, sixth-place finish was still surprising for a team that had won 13 of its previous 39 matches.

After 2019 there was some hope for the team, but last season made it seem they were destined for years at the bottom.

A quick turnaround has the club’s most important clash in recent times set in Tasmania of all places against their main rival, a contest that usually provides great entertainment for the neutral.

Finals are a different beast though. and the question is: can this team hold up?

We cannot flippantly ignore Sydney’s achievements to date, repeatedly proving themselves to be a genuine contender.

They beat the aforementioned Lions and Tigers early in the year, then proceeded to know off Geelong and the Bulldogs, beating Essendon twice and getting within ten points of both Melbourne and Port Adelaide away from home.

It started with the youth taking over, Errol Gulden and Chad Warner starring early on with a couple of Braeden Campbell and Logan McDonald sightings sprinkled in.

Coach John Longmire has backed in the younger players to become important parts of this team, while the more experienced guys have been extremely consistent and ideal role models for those developing.

Perhaps the most important aspect of the season, much like their opponents this weekend, is the fact have spent much of it away from home, becoming tighter as a group. The camaraderie and bond built across the group cannot be underestimated in its power. There’s strength in unity.

Flipping the script and creating a new club identity, Sydney have been one of the most exciting teams to watch this season, finishing with the third-most points per game, averaging 90.27.

Lance Franklin kicked 48 goals in 17 games to get him within touching distance of the 1000-goal barrier, while Tom Papley kicked a career-high 41 goals along with a career-high 21 goal assists.

Add in Isaac Heeney (32 goals), Will Hayward (28) and the likes of Sam Wicks, Luke Parker, Errol Gulden, Hayden McLean and Tom Hickey all kicking more than ten and there is a consistent rotation of players who have been hitting the scoreboard from different parts of the ground.

They’ve been as eye-catching offensively as they have been tough in the clinches and resolute defensively, making the Swans one of the most well-rounded teams in the competition.

In the home-and-away season they were ranked second for disposals and goal assists, third for tackles and inside 50s, fourth for metres gained, fifth for clearances and sixth for intercepts.

The only other team in the competition with similarly rounded coverage across the ground statistically is Melbourne, who finished up as minor premiers.

In recent times Richmond has been the most successful team, and that has come on the back of being the best in a couple of key areas as well as having a plan that had been largely unstoppable for the best part of four seasons.

What has been clear is that while a strong defence is the backbone of winning a premiership, offensive points of difference and variability in different areas of the ground are keys to success.

The midfield has had a rotation of players who are hungry defensively as well as being able to impact offensively, which starts with the duo of Callum Mills and Luke Parker.

The latter ranked in the league’s top 20 for disposals, tackles, goal assists and clearances as well as being in the top ten for contested possessions, while the former averaged 28 disposals, six marks and five tackles and ranked as the best midfielder at the club for metres gained and rebounds having been converted to a full-time midfielder.

Rotating with a bunch of experience and youth through the centre circle and on the wings ultimately meant that the Swans were constantly changing the outlook on the field, which is extremely difficult to defend against.

When it comes to finals, good clubs bank on reliability and defending based on their opposition having one effective style. The great clubs have multiple ways to attack and defend.

No longer was it the reliance on Dane Rampe as the undersized, main key defender. Tom McCartin became an above-average league key back, averaging 14 disposals, two intercept marks and six spoils a game. He clearly defended the most one-on-ones and lost 24 per cent of them, above the league average, which freed up Rampe to have an underrated season as a two-way player.

These are the two key players against GWS, who have a strong forward half group. It may be why Lewis Melican has been reintroduced into the fold over Robbie Fox – the small sample size indicates career-high intercepting and defensive numbers. 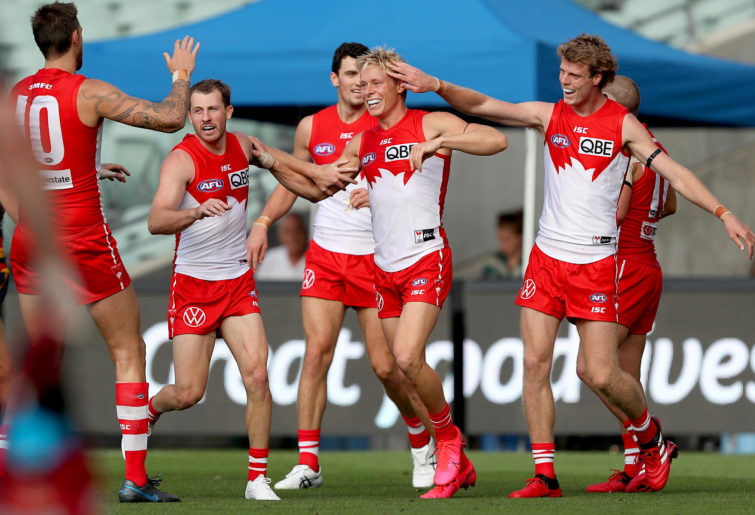 The games against GWS season were split, with a heartbreaking two-point loss in Round 5 followed by a barnstorming comeback in Round 18 to run away 26-point victors.

In both these games it was contrasting ball movement that had Sydney in powerful positions at various times, and the two main players remain the same heading into Saturday’s clash.

Jake Lloyd is perennially overlooked for league-wide recognition, but this was his best season. He was far more defensively accountable than ever before and was successful in his ability to shut down space and stay strong enough one on one. We haven’t seen much of him as an interceptor, but he stood in the hole and put his body on the line for his team multiple times, ranking third at the club for intercepts.

Jordan Dawson is underrated across the league and may well be the best kick in it. He’s the prototypical utility, shifting from his role across halfback to a wing later in the season to magnificent effect. Against Fremantle in Round 10 he had 31 disposals and 17 rebounds, and in the final match against the Suns he had 33 disposals, 16 marks, eight inside 50s and a goal.

In both games against the Giants, Lloyd and Dawson were among the most prolific and important players at Sydney. The newfound adaptability of Lloyd paired with the skill of Dawson is paramount to the quick ball movement that has made the Swans a contender this season.

We can comfortably add in Justin McInerney, who has the potential to reach great heights for the Swans.

This is the way the Swans are to be successful against GWS and it’s also the reason this group has huge upside long term if the core group can remain the same, pending salary cap issues that are starting to emerge. 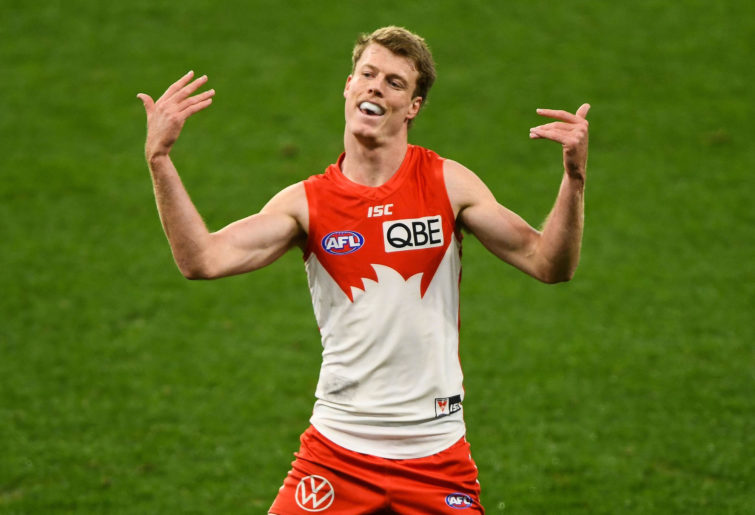 While Franklin is hardly the player he used to be, he’s a strong enough target that he demands close attention, and the Swans have far too many offensive weapons that exploit the opposition as a result. Credit goes to Hayward, Franklin and Wicks for the forward pressure that has Sydney third for tackles inside 50.

There are many players who can rotate through Sydney’s midfield. They can flip Dawson back or forward if need be, Heeney and Reid can be thrown behind the ball as intercepting options and the mid-sized forwards can play one-out in the square.

We haven’t even touched upon Tom Hickey’s breakout season, averaging 17 disposals, 24 hitouts, five clearances, five score involvements and three intercepts a game. That battle against Mumford will be huge if he can be decisive in the ruck and escape the clutches of his opponent.

There’s no Mills, nor is there Kennedy, but the luxury of bringing in Chad Warner and the flexibility of George Hewett can still do a job, even if it means the team’s back is against the wall.

The contrasting styles of Sydney and GWS make this the most must-see final of the weekend, and we know the history between the two clubs.

Conditions in Tasmania are swirly and unlike what these teams are used to. They will favour the more attacking team, the one who takes the game on and can put mistakes out of their head best. That’s Sydney to a tee.

But regardless of the result, the Swans – and the Giants for that matter – have benefitted enormously from this COVID-affected season where they have been away from home for an incredible amount of time.

The groups appear stronger than ever, the bonds are tight and the coaches have been able to rally the troops heading into the most important game of the season.

Sydney have created a powerful unit that has the potential to create significant damage both in its attempt to overcome its immediate obstacle this weekend and also into the future.