Port Adelaide are through to their second consecutive preliminary final after a dominant 43-point win.

There are always plenty of talking points from just about any game of finals football, here are four I picked out.

Port’s mosquito fleet does the trick

It had been billed as a perfect night for key forwards in the leadup, with Charlie Dixon versus the combined output of 300-gamer Tom Hawkins and Jeremy Cameron supposedly the main event.

Dixon definitely played his role, competing well in every forward pack and taking some great grabs further up the field, but the night belonged to Port’s smaller forwards.

Returning from a hamstring injury, Orazio Fantasia kicked four classic small forward’s goals. The second came from a sublime one-handed pickup in the pocket, followed by a great checkside snap, but his third – the only goal of the third quarter – was the standout.

Off a rare Patrick Dangerfield fumble, the ex-Bomber sent an excellent drop punt on the run through the vacant goal square to put Port in full control.

His night may have been soured in the last quarter, however, after he came from the field and was subbed out with ice on his left knee. 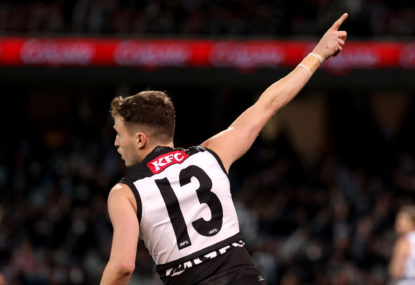 Steven Motlop had two majors, including the first of the match, while Robbie Gray and Zak Butters also contributed from ground level.

Jonathan Brown, speaking on Fox Footy’s coverage, said the new-look Port forward line could be an x-factor this finals series.

“I like their balance better, I think it’s done them a favour, [Mitch] Georgiades getting injured. They’re playing with one less tall and [Orazio] Fantasia comes in,” he said.

“Their ground ball work has been a lot better. They’re really dangerous at ground level and that’s a vulnerability of Geelong … their defensive 50 ground ball,” he added.

Fresh off his first-ever All Australian honour, Aliir continued his career-best year with a dominant performance down back.

He racked up a whopping five intercept marks in the first quarter alone, with the latter two directly contributing to crucial Port Adelaide goals.

He didn’t have a lot to do for the rest of the game as his teammates dominated proceedings, but his aerial dominance saw the Cats get very cute with their subsequent entries and made life very difficult for Hawkins and Cameron.

Brown attributed the super effort to a coaching masterstroke from Ken Hinkley.

“Jeremy Cameron kicked five on him in that Round 13 clash. Playing on the smaller Geelong forwards, I think he’s been able to lay off, he’s playing on these players that aren’t expected to be targets, like your [Luke] Dahlhaus, [Gryan] Miers,” he said – and Jason Dunstall concurred.

He declared the best way to make use of the ex-Swan was to “give him a role where he can make the decision to peel off and give help in the air when needed.”

Geelong have had a well-publicised history of finals failures during Chris Scott’s tenure, and they did themselves no favours in reversing that narrative this evening.

The Cats have played eight qualifying finals since Scott took the reins in 2011. Tonight was their sixth loss and you could argue it was their worst.

“They played themselves on into trouble a few times,” Nick Riewoldt said.

Brown seemed to imply that the finals pressure had gotten to the Cats.

“The only time Geelong looked comfortable was when they didn’t get caught up in the rush of the game and actually thought their way through it. This is a strength of the Cats, but finals pressure’s different,” he said.

“You contrast this first half with the first half last week against Melbourne, where Geelong led by so much, they chipped it around and forced the Melbourne defenders in [Jake] Lever and [Steven] May to come out and play on someone,” Riewoldt added.

Unfortunately, their response after quarter time was to play with such meek caution that Port’s lead was never under threat. Their ball movement was reminiscent of a chess board made only of pawns, while their pressure around the ball carrier when Port had the ball just wasn’t up to scratch.

How on earth did Travis Boak not get an All Australian blazer?

There have been some massive snubs in the history of the All Australian side and, while Jake Stringer’s absence has been getting a bit of attention, Travis Boak’s non-selection was made to look even more ridiculous tonight.

He was switched on from the get-go and his stats made for simply mouth-watering reading; 32 disposals, 16 contested possessions, ten score involvements, seven inside 50s and eight clearances. Had one or more of his three behinds gone through the big sticks, it would’ve been one of the finals performances, but it was still an extraordinary effort from the former skipper as he tries to drag his side to a flag.

Those were my biggest takeaways from the second qualifying final. What were yours? Let me know in the comments.