It was announced last year that clubs will not be able to match bids on tied next generation academy players in the first round of the 2021 national draft, with a majority of clubs voting against their own self-interest by agreeing to remove the measure that allowed the Western Bulldogs to scream up the order to match Adelaide’s bid on Jamarra Ugle-Hagan.

In fact there were three NGA players whose bids were matched in last year’s first round and a further two in the second round which from 2022 won’t be able to be matched either.

However, the 2021 draft will hardly go uncompromised, with father-sons and northern academy prospects bound to attract bids and pushing out the end of the first round multiple places, perhaps as many as five or six if the under-19 national championships can expose the form of kids that haven’t been playing due to recent lockdowns.

Another thing that helped to blow the 2020 first round out to 26 picks was the concession pick given to the Gold Coast Suns, originally Pick 11, which they had traded to Geelong, who in turn had been strong-armed into handing over to Greater Western Sydney as part of the Jeremy Cameron negotiations.

This year the AFL Commission has so far prevaricated on announcing whether the Suns will be getting their third year of the concessions that were announced at the end of 2019 in the form of priority drafts picks and list spots.

Last year the AFL prevented the Suns from trading their future start of the second round 2021 priority pick, leading to speculation that it might be removed if the Suns season dramatically improved.

One concession that is confirmed is that the Suns will be able to keep their extra rookie list spots, which is designed to enable the club to nurture academy talent. However, there is no word yet on whether the club will be able to prelist academy players as they have at the past two drafts.

While prelisting players outside of the draft may seem like an unfair advantage, what it has done has dramatically lowered the value of the Suns picks that they can’t use, so clubs willing to trade have walked away with the better of each deal.

Gold Coast currently have plenty of draft picks to match bids for their academy players – Austin Harris, Will Bella, Bodhi Uwland and Ned Stevens were named in the top 90 draft combine prospects list – so if prelisting is removed as an option, the club has a fallback.

However, with both prelisting and a haul of draft picks, the Suns can be very active in the trade period, which would allow them to bring in experienced talent to augment the young list and still nurture academy talent, which has the flow-on effect of distributing picks back to clubs looking to move fringe players and top up on youth at the draft. 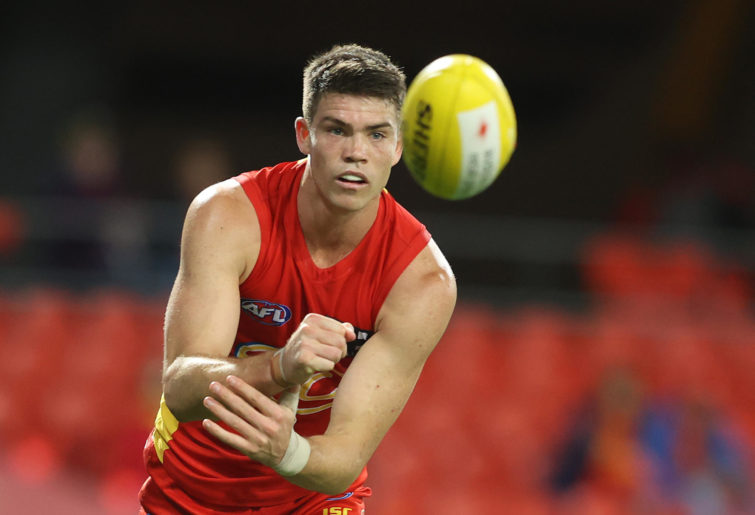 Looking at the Suns’ season and the benchmarks by which the AFL Commission judges the allocation of concessions, there has been an improved win-loss ratio, better percentage and more resilience in the playing group, although injuries returned this season with a vengeance, and this ought to prioritise the last instalment of concessions.

It mustn’t be overlooked that in 2018 the AFL Commission deliberated on three applications for priority picks from the bottom teams – St Kilda, Gold Coast and Carlton – and deemed the Suns and Blues to be worthy but ruled that the Saints had the list to bounce back.

Yet these priority picks came in the form of being able to recruit uncontracted players from second-tier competitions and prelist them before the draft, with Carlton able to sign two players and the Suns given three.

The clubs were given the choice to keep or trade these players, which Carlton went to the draft with, trading Sturt’s Shane McAdam as part of the deal that landed Mitch McGovern and sending Nathan Kreuger from South Adelaide to Geelong for a pick that helped get Will Setterfield.

Alternatively, the Suns went out to fill list needs as they cleaned house on several Rodney Eade-era deals, recruiting Chris Burgess from West Adelaide, Sam Collins and Josh Corbett from Werribee to replace a lot of mature bodies.

Three seasons later and these five players have made a remarkable impact on their new clubs, and recruiters have been taking much more interest in finding the next Tim Kelly, as evidenced in the players taken in this year’s midseason rookie draft.

Without a doubt this type of priority pick worked to assist Carlton and the Suns while not compromising the integrity of the draft, as all of these players continue to regularly feature at the top level and all look to have bright futures.

North Melbourne are in dire need of this concession this year, with five of their best players on the wrong side of 30, the future of their list coming through in their early 20s and an underwhelming draft hand where even Pick 1 probably gets only the third-best player.

Collingwood would have a case to get such a concession as well given the AFL Commission took pity on the Suns after their disastrous trade with West Coast, although they need draft points more than mature bodies, so if they could get a player like the WAFL’s Greg Clark (current Sandover Medal favourite) and trade him on to give them extra mid-range draft picks, they could match an early bid for Nick Daicos and potentially get back into the draft in later rounds.

It is an elegant model that seems to have been mothballed due to the introduction of the supplementary selection period and the midseason rookie draft, yet it could be a successful alternative to the controversial priority picks.