The Roar
28th August, 2021
11
Join the conversation
Advertisement
Write for The Roar

Melbourne are through to their third preliminary final this millennium after dominating the Brisbane Lions from start to finish in a 33-point qualifying final win.

They did it all around the ground, with Ben Brown (nine marks, one goal) and Bayley Fritsch (five marks, four goals) clunking them up forward, Ed Langdon (seven) and Alex Neal-Bullen (six) nabbed in the middle and Jake Lever (five) was immense down back.

Charlie Cameron kicked a bag of five up forward for the Lions, but Joe Daniher was blanketed by Steven May and an early injury to Daniel McStay threw their forward structure all out of whack.

Ben Brown got Melbourne off to the perfect start after gathering a loose kick inside 50 before snapping truly with barely a minute gone on the clock.

Ben Brown back in the finals and it takes just 30 seconds for him to kick the Demons' first ????

The motorbike was well and truly revved up soon after, with an errant handball being scooped up by Cameron inside the centre square before he went on a run akin to Lewis Jetta’s famous goal in the 2012 preliminary final.

A bad bounce threatened to ruin it, but he gathered and nailed his second, only for Tom Sparrow to level the scores again off the next bounce.

The Lions were forced to make their medical substitution early after Dan McStay copped an errant knee to the face from a teammate.

From there, Melbourne started to gain the ascendancy and moved ahead through a superb snap from Kysaiah Pickett deep in the pocket – but the Lions struck back soon after through Zac Bailey.

The Demons were in control though and soon had their lead restored courtesy of some excellent forward pressure and a strong left-foot snap by Clayton Oliver – but again the Lions were able to respond against the run of play through Cameron.

Ed Langdon’s set shot put the minor premiers ahead once more and they were able to head to the first break with an eight-point lead.

Bayley Fritsch found himself in space and slotted an easy set shot to push Melbourne further out in the second quarter, but a costly 50-metre penalty from Jake Lever allowed Jarrod Berry to kick an easy steadier for the Lions.

The Dees were able to flex their muscle from their, however. While they missed a couple of set shots initially, dominant work through the midfield eventually paid off as Oliver’s break and deep kick found Pickett at full forward. He converted the easy set shot and the margin was out to 17 points.

On Channel Seven’s commentary, Matthew Richardson lamented that Brisbane had lost their forward structure and declared they wouldn’t win the game unless they could start taking marks inside 50.

Melbourne moved further ahead after a superb Charlie Spargo tackle on Brandon Starcevich was rewarded with a free kick and he converted the set shot from just inside 50.

But as dominant as the Demons had been, wayward kicking was keeping their opponents in it. They had ten scoring shots to three in the second quarter, but only finished with four goals to one.

That said, it was still enough for Melbourne to head into half time with a 30-point lead – Brisbane’s biggest deficit at the long break all season.

It took well until after halfway in the third quarter for a goal to be kicked – but it went Brisbane’s way after a super midfield tackle from Joe Daniher turned the ball over.

The kick went goal side of Charlie Cameron, but he gathered in the pocket, ran to the corridor to improve the angle and snapped his fourth.

Talk about a much-needed goal!

The Lions got themselves a second consecutive major soon after with arguably their best passage of play all evening. While their play wasn’t any quicker than the first half, they were smarter with their kicks forward and eventually found Hugh McCluggage on his own inside 50.

He dobbed the shot from 40 out on the angle to reduce the margin to 19 and make the final quarter interesting.

But the Demons were able to restore part of their advantage early in the last after Bayley Fritsch slotted his third from a dubious free kick.

Brisbane weren’t deterred, however, after Lincoln McCarthy won a ground ball inside 50 and sent an excellent snap through the big ones.

Did Petracca just kick the sealer for the Dees?!

Absolute SCENES as Brisbane draftee gets mobbed by mates, then gives sensational interview

Wonderful stuff from Darcy Wilmot- and his mates! 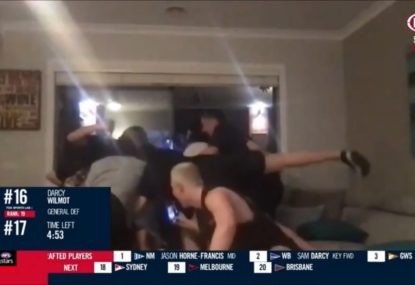 Absolute SCENES as Brisbane draftee gets mobbed by mates, then gives sensational interview