After 67 days of exile outside their COVID-19 ravaged state, the two New South Wales foes fought a memorable season climax but it was the Swifts who took their game to another level at Brisbane’s Nissan Arena.

The chief destroyer was Trinidad and Tobago star Wallace whose silky skills, movement and deadly accuracy yielded 51 goals at 92 per cent accuracy, including three super shots to rip the game out of the Giants’ reach.

It was just one of the dazzling features of a skillset that helped her to the 2019 grand final player of the match award and commanded this decider in front of 3650 roaring fans.

“She’s definitely got a presence out there,” said Swifts coach Briony Akle who at halftime reminded Wallace she had the ability to dictate terms.

“She definitely steps up to the big games. In terms of dominating the opposition, she certainly did that.

“The Giants didn’t have an answer for her today.”

After playing well beyond her 19 years all season, Sophie Dwyer came back to earth and not even a lionhearted performance from captain Jo Harten (34 goals) could haul the Giants out of trouble.

Dwyer (16 goals) was silenced by the grand final’s most valuable player Maddy Turner who was rewarded for wearing Dwyer down over four nagging quarters.

“They were another level from the first whistle,” Harten lamented. 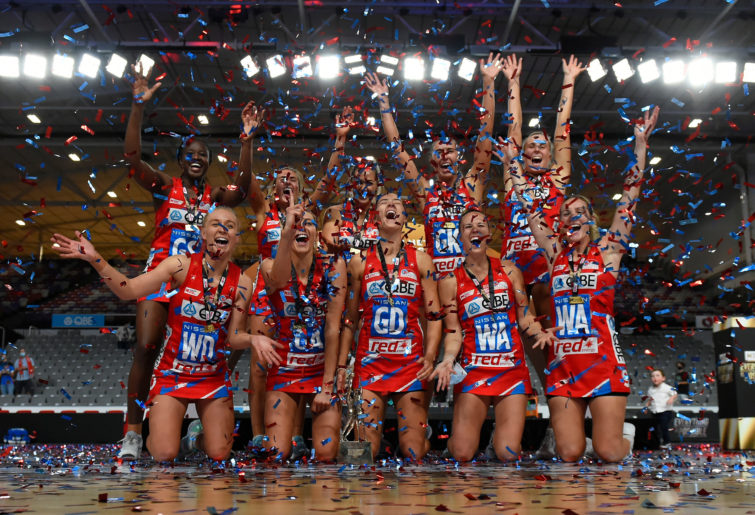 The Swifts celebrate after they defeated the Giants during the 2021 Super Netball Grand Final. (Photo by Albert Perez/Getty Images)

“We gave absolutely everything to claw back the deficit but it was one of those games where you never felt like you were on top.

“We had a lot of intent but they were pretty clinical.

“With so many threats available in a grand final it can be near impossible to decide where to focus your defence.”

The Swifts zeroed in on Amy Parmenter, ensuring every corner the Giants wing defence turned, there was strong body to meet her.

Hadley had her measure for a period, constantly nudging, blocking and occasionally niggling the Giants star while maintaining an attacking presence herself.

By the end of the first half, it was Parmenter who had the final say. She broke the shackles with a series of defensive gains that drove her side back into the contest.

The Giants trailed by just four at halftime but fell away in the third term when they had no answers to Wallace’s influence.

Wallace had already torched Sam Poolman and Matilda McDonell, and the Giants turned back to Poolman as the import sank 13 third-quarter goals.