Justin Langer has, for now, survived an intense fortnight of speculation about his role as Australian coach.

Much as when he opened the batting on fast WACA decks, the West Australian copped a press barrage in recent weeks, ranging from leaked player discontent to disgruntled former colleagues.

He survived — but only just.

While Cricket Australia CEO Nick Hockley might try to convince the public otherwise, his hold on the role remains tenuous. For Langer has overseen a steady 18-month decline in results.

Irrespective the mitigating factors and excuses provided around recent defeats, the Australian men’s team has stagnated in the two most relevant formats as we speak: Test and T20 cricket.

Langer is fortunate that recent series defeats to the West Indies and Bangladesh were as off-broadway as possible for an Australian team, overshadowed by the Olympics and (in the case of Bangladesh) only available on surreptitious streaming sites.

But in less than two month’s time, everyone will be watching.

Grouped with both the Windies and world no.1 England in the upcoming T20 World Cup, the threat of missing the semi-finals is genuine.

Should that occur, the jungle drums will be beating louder than they have in recent weeks for Langer’s exit, and his intense personality will come under even more scrutiny.

We’ve compiled a list of the most likely candidates to replace him, and their estimated odds.

Andrew McDonald ($1.40)
The standout option. And for good reason.

Not only is McDonald the natural replacement (given his position as assistant coach), universally respected amongst players and recognised for his level-headed temperament, he is a serial winner.

The former all-rounder began his coaching badges aged 27 and at just 33, took over a Leicestershire side that had not won a County Championship match in over two seasons.

Soon after they broke a 992-day drought as McDonald oversaw a club rebuild. From there he took over at both Victoria and the Melbourne Renegades and success soon followed, including a BBL title, two Sheffield Shields and a One-Day cup.

Former Australian quick Dirk Nannes last week told told the ABC that “Australian cricket would be the poorer for not elevating him” should the role become available.

Gillespie has long been linked to big roles, without ever landing one. Back in 2015 he was the red-hot favourite to replace Peter Moores as England coach, but was pipped by Trevor Bayliss. One gets the feeling he’s close, and the Australian position could well be it.

The similarities with McDonald are striking. He, too, has won the BBL (with Adelaide Strikers in 2017/18) and two domestic titles, when he led Yorkshire to back-to-back County Championships in 2014 and 2015. 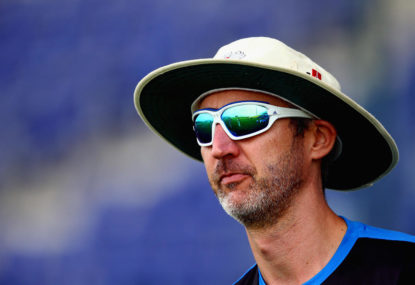 Gillespie, too, operates from the new school of coaching and is much more likely to put an arm around a player than deliver them a spray.

This was particularly evident when, in 2015 as a young reporter, I spent the season covering Yorkshire games in the 2015 Natwest T20 Blast.

Gillespie’s upbeat demeanour post-game rarely wavered, be that after a big win or crushing loss. He backed younger players in and gave them responsibility. He is a people-person, and a good delegator.

It shouldn’t be overlooked that England went from ODI World Cup embarrassments in 2015 (bundled out in the group stage) to champions in 2019.

Aligning brilliantly with Eoin Morgan, they employed an ultra-aggressive approach especially to batting that, while experiencing some teething issues, saw them rise to the top, where they remain.

While Langer might be described as a hands-on coach, Bayliss is the embodiment of hands-off. Rarely flustered and always measured, it may just be the demeanour some players are reportedly crying out for.

It can’t be overlooked that while overseeing strong white ball results, England’s Test side stagnated under Baylis. The batting unit as a whole struggled, the legacy of which sees an unhealthy reliance on too few. At 58, whether Bayliss has the drive to re-enter an international role could also be a huge factor. His current position at Sunrisers Hyderabad would see him well paid and having to spend far fewer months away from home.

Greg Shipperd ($7.00)
Few coaches have had a greater influence on Australian domestic cricket than Greg Shipperd. He has won 11 titles, including the two most recent BBL comps with the Sydney Sixers. It’s doubtful anyone understands the domestic structure and all its players better than Shipperd, who is reportedly forensic in his examination of opposition.

It seems every figure in Australian cricket has a Shipperd anecdote, the vast majority of which are positive. Take Ricky Ponting, for example, who he coached as a youngster in Tasmania.

“He understood me well, he understood my game well, and if things weren’t going well throughout my international career, he’d be the first one I’d talk to,” Ponting told cricket.com.au earlier this year.

“I still think now, talking batting with him is probably the most I’ve ever got out of talking to a coach about batting.”

Again, age would come into the question with Shipperd. Would a 64-year-old have the drive to spend 300 days away from home a year?

Michael Di Venuto ($11)
A well-respected batting coach for Australia from 2013 to 2016, who in July re-entered the fold as another assistant for Langer. Di Venuto left his post in 2016 bound for London, where he coached Surrey until 2020. Whilst at The Oval, he claimed the 2018 County Championship. Di Venuto is reportedly well-liked among players and his re-emergence as Aussie assistant (where he will again focus on batting) will serve the team well. However a lack of head coach success so far in the shorter formats doesn’t bode well for any future role.

Ricky Ponting ($15)
The fact Ponting is an outsider to take over as Australian coach is a reflection on the role, not him. In fact, it’s likely he would be one of Cricket Australia’s top candidates. Whether he could commit himself wholly to the role, however, given his business and media interests is another thing altogether. Ponting’s work at Delhi Capitals (especially with Rishabh Pant and Marcus Stoinis) has been superb and if Cricket Australia in future decide to split the head coaching role — as they absolutely should — then the chance of securing him might rise. As it stands, it would appear unlikely.