Weightman didn’t deserve all of his free kicks, but he deserved his four goals

The small forwards were always going to be key given the wet conditions in Launceston, but kicking a bag of four on any day is a superb achievement for a crumber.

Cody Weightman earned the ire of Essendon fans after all four of his majors came off the back of free kicks – four of the six he was awarded on the afternoon.

Were all of them there? The one that led to his fourth goal sure wasn’t.

But that doesn’t change the fact he nailed some very difficult set shots to earn his scoreboard impact, with any right Bombers fans had to complain being reduced by their side’s inability to nail simpler chances down the other end.

His attack on the ball was also supreme, with 12 of his disposals coming off 11 contested possessions – fourth on the team.

The last free kick was a shocker, but Weightman put in an excellent small forward’s performance in the wet and deserves all the plaudits coming his way.

The Dogs had commentators scratching their heads in the leadup, swinging multiple late changes that saw 2016 Norm Smith medallist Jason Johannisen relegated to the medical sub role in place of Josh Schache for just his fifth game of the season.

With wet weather forecast for the afternoon, the idea of omitting a pacy rebounding defender for a tall forward seemed like utter madness, but the selection risk paid off handsomely.

Schache playing forward stretched Essendon’s undersized defence too thin and, while they predictably only managed six marks inside 50 in the conditions, their separate leads created plenty of space for the small forwards to work with.

Weightman, as mentioned, kicked four, Mitch Hannan was able to slot two goals and Laitham Vandermeer added another in a superb effort from the forward group. 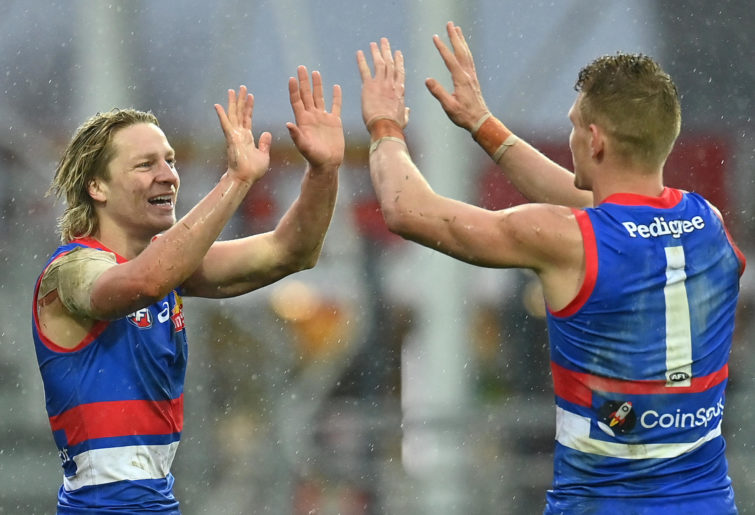 But it wasn’t just a supporting role for the ex-Lion, Schache kicked two goals himself, while directly setting up Vandermeer for a crucial fourth-quarter major. His presence also took some attention off Aaron Naughton, allowing him to kick three.

Dermott Brereton noted as such in the Fox Footy commentary at half time.

“It’s just given them a bit better balance … Schache can lead-up at the footy and that’s given a bit more space to Naughton,” he said.

With Josh Bruce not coming back this year and his absence being sorely felt, perhaps plonking another key forward in the mix was the simple solution we all missed.

After seeing Ben Brown cause nightmares for Brisbane’s defence all night, you’d back Luke Beveridge to stick with a similar mix next week.

It took until the second half of the rain to really hit the deck in Tasmania’s north, but the big reason the half time margin of three points ballooned to 49 by the final siren was simple; only one team played to the conditions.

The Dogs have may gone taller in their forward line, but they were prepared to pick the ball up and run, find teammates by hand, whack the ball forward and emphasise territory over clean possession. That allowed them to send dangerous kicks deep into their forward line from good positions and, as aforementioned, use their height advantage to bring the ball to ground and kick goals.

Their huge advantages in contested possessions (+33), inside 50s (+11) and clearances (+10) for the half were a testament to their superior approach.

Essendon, on the other hand, stuck to their original gameplan. They continually kicked too long wherever they were on the ground in conditions that meant they simply weren’t going to mark it.

Long kicks out of defence were dropped in vulnerable field positions. Long kicks in the midfield fell too shallow inside 50 to be of any threat – especially given their forwards were set up far too deep to begin with.

It meant that Peter Wright, just weeks after kicking a bag of seven against the Bulldogs, went virtually unsighted – having just seven touches and failing to take a mark.

It was a big contributor to Essendon being the first team since 1956 to go goalless in the second half of a final. Their forwards just weren’t given a chance.

At quarter time, the Bombers had a 10-3 lead in the intercept marks tally and had kept the Dogs from taking a single mark inside 50.

Marcus Bontempelli had been restricted to two disposals, Josh Dunkley had one and the Bulldogs had just nine tackles on the board.

But, despite all that, the Bombers found themselves down three points on the scoreboard.

Jake Stringer’s early goal was the only major they managed, with Zach Merrett, Will Snelling, Aaron Francis and Tom Cutler all misfiring – Francis’ miss being notably poor.

Quick goals to Devon Smith and Darcy Parish in the second quarter got them on top briefly, but again they could only manage 1.3 despite dominating the time-on period before half time.

As we all know, the rain came down and washed the Bombers away from there – but who knows how different the match would have been if it was the Dons emerging from the sheds with a two or three goal lead?

Do the Dogs, under pressure to mount a proper comeback in the wet, start playing more recklessly and turn it over? We’ll never know, but the Bombers will have the next six months to think about it.