Golden Age Golf Auctions said on Sunday the Scotty Cameron putter was now believed to be the most expensive golf club ever sold.

The putter was personally produced by Cameron for Woods and comes with a letter of authenticity.

Woods won five tournaments, including the Masters and the US Open, in 2002.

Fifteen-times major champion Woods practised and experimented with the putter but did not use it in competition, the auction house said.

“There are only a handful of pieces of sports memorabilia that we can be relatively certain will be collected for centuries – Babe Ruth’s (baseball) bat; Muhammad Ali’s (boxing) gloves; Michael Jordan’s (basketball) shoes,” the auction house said.

“When it comes to golf, there’s one such item that we would add to the list above all others – Tiger Woods’ red dot Scotty Cameron putter.”

The putter Woods has used for the majority of his 15 major victories is still in his possession and would fetch millions if it was to ever go on the block, the auction house said.

Woods, 45, is still recovering from the multiple leg injuries he suffered in a car crash in February near Los Angeles. 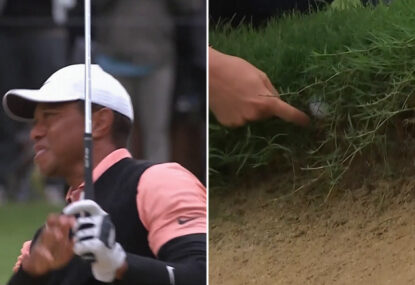