The Bombers’ season is definitely an A+ in my book.

They were expected to be in the bottom four this year after having a traumatic trade period last year when four best-22 players walked out the door.

However this year brought a new coach with new principles and the Bombers played with flare and boldness that I haven’t seen in my decades as a Bombers supporter.

Read on for my thoughts about the Bombers’ elimination final loss against the Bulldogs.

Bombers have a wet weather problem
The Bombers had excellent form coming into the finals, yet it was something of a false dawn given two of their three wins came against bottom-four sides in the Suns and Magpies.

However it was clear on Sunday that they don’t know how to handle wet weather footy, and when you combine it with the pressure of finals it was always going to combine for a perfect storm that resulted in a Bombers loss and the extension of their long, long finals drought. 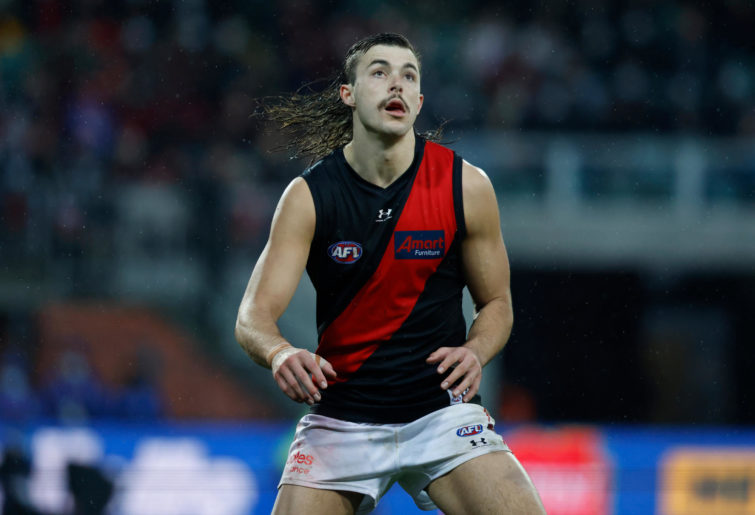 What stuck out to me was the inability of the Bombers to modulate their disposal in such a way that advantaged their own side, in particular the overuse of the hand pass winning that particular stat by ten.

The other element was the contested ball as the Bulldogs dominated that state as their big midfielders came to the fore with 22 more contested disposals.

The Bombers have failed every time it’s come down to playing in the wet this season, being positively demolished by the Lions earlier in the year, getting smashed by Geelong and largely failing to fire a shot against the Western Bulldogs in this elimination final.

The Bombers were clearly tired by the end of the third quarter as bewildering umpiring and clinical finishing came to the fore as the wet weather dominated the game.

Dylan Shiel’s dog of a day
Twenty-four disposals is a relatively good performance just looking at the top-of-the-line numbers. However, those disposals were at 45 per cent efficiency as Shiel appears to be lacking in confidence.

I have seen people demanding that Essendon trade Shiel. Sadly this does not work as he is on an extremely healthy pay packet.

Now with the development of Zach Merrett and Darcy Parish, Shiel can assume his old role at the Giants where he can burst from the stoppage and remain slightly more on the outside.

He had a dog of a day because the Bombers have no idea how to play in wet weather conditions and the Bulldogs exploited that to maximum effect.

Draper dominates
Sam Draper has been a breath of fresh air this year. Part of that might be his mullet-undercut combo, another part of it might be his enthusiastic celebrations but I think it’s because he is brilliant.

Forty-four hit outs, 18 disposals, and 12 contested disposals is exemplary for a ruckman in the modern game. He is yet another gem from the nether regions of the rookie draft and will only continue to improve.

The one thing I would say he can improve is his goal kicking and ball drop. He is a soccer convert because he became too tall to be a goalkeeper.

All he needs to do is adopt a better ball drop and he will dominate games in like Nic Naitanui as an expert tap ruckman.

Strange selection choices lost Essendon this game
The coaches have earned my respect at Essendon, taking a team that was largely predicted to have a bottom-four finish to the finals. But I do have queries about some of the choices that Ben Rutten and co made at the selection table.

The decision to bring in Jye Caldwell over Dylan Clarke, who can play a more defensive midfielder role, was felt. However, I am backing the decision as I believe the Bulldogs went home, did their homework, and believed that lightning cannot strike twice as this game was the inverse of our preceding clash in the home-and-away season.

The other strange decision was leaving Martin Gleeson on Cody Weightman when he was clearly outbodied by the antagonistic small forward. Note there were far more expletives here in the first draft.

That resulted in six free kicks and four goals. Weightman clearly benefitted from the absence of Nick Hind, who has shown the ability to shut down and rebound.

I am going to back the Bombers to go onwards and upwards next year. If they can make their defence a little more miserly and win some of the games that they lost by a goal then the Bombers will be a threat next year.

One final note
News has come out recently that Essendon player Anthony McDonald-Tipungwuti was racially abused on Facebook. This is unacceptable. He is a jet, no ifs ands or buts.

I just want to take the opportunity to shout out ‘Tippa’ in the unlikely circumstance he reads this page. Any Essendon supporter who thinks they can racially vilify any player is not acceptable.

I would appreciate everyone getting around ‘Walla’, who has had a proverbial nightmare this season with the instability and the prospect of another COVID hub season.

He has been a joy to watch and should not cop any abuse. Get around ‘Walla’ because he deserves our support right now.

There are no bests this week because the Bombers need to improve across the board. The Bulldogs match up the best when it comes to the Bombers and there’s a reason we’ve only beat the Bulldogs once in seven years.

It still hurts particularly when contentious umpiring dominated the game, however, this season is most certainly a heathy pass mark for the Bombers and Essendon will get their vengeance on the Bulldogs next year.