Can Quade and Samu wind back the clock for the Wallabies?

It looks for all money like Dave Rennie is ready to turn back time, and wind the hands of the clock all the way back to 2016, in preparation for the last Bledisloe Cup game of 2021. That was the last time that ex-Reds stars Quade Cooper and Samu Kerevi played together for the Wallabies.

Australia has been desperately short of experience and leadership in midfield, with none of the starting combinations in Bledisloe Cup 1 (Noah Lolesio, Hunter Paisami and Len Ikitau) able to muster double figures before the start of the current Rugby Championship series.

Matt To’omua arrived with his 57 appearances to try and steady the ship in the second match, but struggled to make the impact that Rennie and his attack coach, Scott Wisemantel, would have wanted. The question-marks about the best mix at numbers 10, 12 and 13 have burgeoned rather than diminished.

If the cavalry comes galloping over hill for Australia, it will be coming from Queensland. Just as the tournament as a whole has been rescued by its relocation to Brisbane, Townsville and the Gold Coast, so Rennie and Wisemantel may look over the horizon to see cowboy Quade and super Samu riding to the rescue.

Dave Rennie has been effusive in his compliments for both players since they arrived back in the Wallabies squad. This what he had to say about Cooper:

“He’s been fantastic in the group and I can’t speak highly enough of him.

“Even when we had a few days off at the front of the week, he was driving a lot of the training and additional stuff a lot of the boys were doing out in the field or down at the gym.

“He’s been a big contributor to all meetings and discussions and happy to share his knowledge and he’s trained really well. His ability for pass selection or kicking options has been spot on and it’s been really good from a training perspective for us.

“He’s pretty much been running the New Zealand plays. He’s applying pressure on us for selection.”

These are the KPIs coaches look for in their veterans off the field. That appetite for extra curricular training, the desire to encourage others around them and transmit knowledge, the ability to execute tactical plans cleanly and precisely on the training paddock.

It looks like Quade Cooper may be about to add to his 60 caps in the third game versus New Zealand, at the ripe old age of 33. It is only right that he gets another chance.

He was dropped unceremoniously by Michael Cheika in his last international season, and then swiftly marked persona non grata when Brad Thorn took over at Ballymore. As Rennie says, he still has a lot to offer the game in Australia, and he probably had even more to give four years earlier.

Rennie was also full of praise for Kerevi:

“Like Quade, he’s an experienced man who’s contributing really well and there’s a fair bit for him to get his head around, of course.

“Obviously, he played over in Suntory. A good mate of mine, Jason O’Halloran, coaches over there and he gave me some really positive feedback around Samu’s preparation and the detail around him trying to be better each day and we’re seeing it in our squad.

“I know he’s done a lot of work at Suntory, as well as his kicking game, on his distribution and as we know he can be direct and has an ability to offload beyond the tackler.

“He’s been working really hard on the defensive side of his game and so it’s been a real credit to him.”

There is a strong impression that the Wallabies head coach is struggling to contain his evident glee at the return of the Fijian flyer. At the age of 27, Kerevi is probably approaching the peak of his considerable powers. At 108 kilos, he offers a block of size and physicality that Rennie has lacked ever since he took over the Australian national team.

Damian de Allende for South Africa, Jonathan Danty for France and Levani Botia for Fiji have all proven the value of that kind of player in midfield over the various summer series in 2021.

The chance of Cooper and Kerevi playing together is only increased by the fact that Quade enjoys playing with power alongside him, rather than an extra playmaker. It did not work with Bernard Foley shoe-horned into inside centre in 2016, and there is little reason to expect it would be much better with Matt To’omua five years later.

If there is an opportunity opening up, Quade will either look hit the line or play wide for a second touch; if not, he will dump the ball off to the forwards or Kerevi and start again.

Let’s wind the clock all the way back to 2016, and the last time that Cooper and Kerevi played together in the green and gold. They clearly enjoy each other’s company and have an innate understanding on the field.

The following sequences (taken from the two home games against Argentina and South Africa) start with a kick receipt and offload by Israel Folau.

The ability to move the ball away from kick receipts quickly was one of the few effective counters for the Pumas in their recent double-header against the Springboks.

All you need to is to have Samu tracking Quade, and waiting for manna to fall from heaven’s table.

Kerevi has the power to beat even a Springbok for power, one-on-one. That is an invaluable asset.

As this example illustrates, one of the main weapons in Quade Cooper’s armoury is the inside pass. I have not seen a playmaker, playing anywhere on the face of the planet, run the in-pass with as much finesse and accuracy as Cooper.

Quade plays flat on the line when delivering the inside ball, and waits until he knows the Argentina number 12 has committed fully to him before delivering the no-looker to Dane Haylett-Petty. The break is made so close to the gain-line that there is no chance for the defence to adjust to Haylett-Petty’s late change of angle. 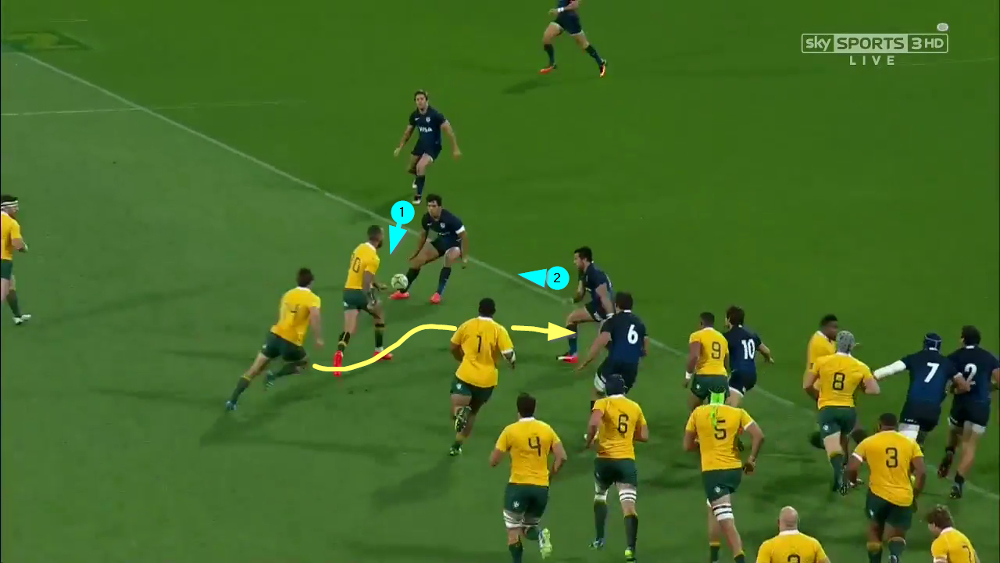 The in-pass is one of the prime scenarios in which Quade will stand much closer to the ad-line, and well ahead of the forward pod which accompanies him.

Cooper has observed that the disconnects in the Pumas defence are closer to the ruck rather than out wide, so he advances to dish the in-pass to the ever-present Michael Hooper. 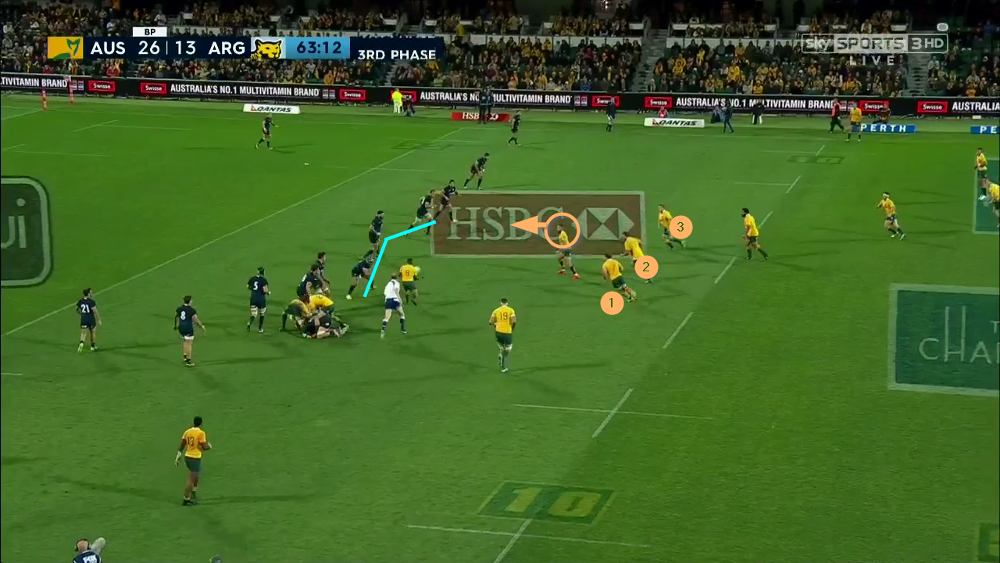 He varies his positioning according to the area he wants to target. If he’s looking to move the ball wide he’ll stand deep, behind the pod of three forwards.

As soon as he scents an opportunity, he’ll call for the ball out of pod and look to get a second touch as the ball is spun wide.

There is no pressing reason for a big second playmaker when your primary distributor is this active, and when he can vary his depth so well. 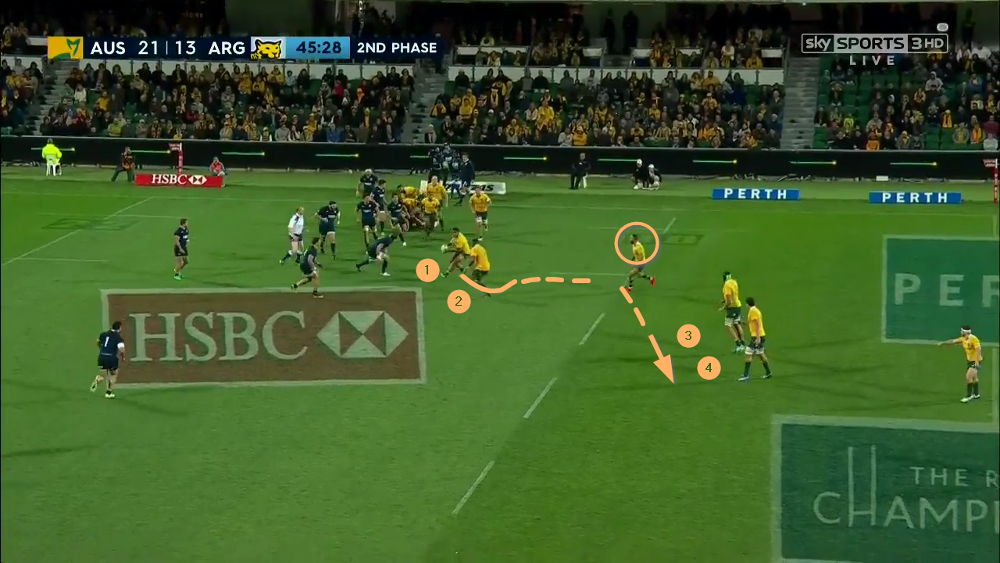 Australia’s first try of the game against the Pumas was created by Cooper’s willingness to hold depth in order to get the ball out to the edge.

If Cooper is standing any closer to the line, the ball will never reach the three attackers (Haylett-Petty, Hooper and Kerevi) on the right edge before a tackle is made.

Fittingly, Kerevi’s strength on his feet finishes off the score.

Let’s take a look at one whole attacking sequence which illustrates the same themes. With Cooper looking to pressure the defensive forwards near the ruck, he stands flat and ahead of his own ‘grunts’.

The Springboks forwards and midfielders are at full stretch to makes tackles and wrap across the back of the ruck for the following phase, and that helps open up the field when play comes back the other way.

With Cooper standing deeper the ball can go wide, although Quade and Izzy probably missed the best chance to penetrate an inviting gap between the last forward (Trevor Nyakane) and first back (Elton Jantjies). 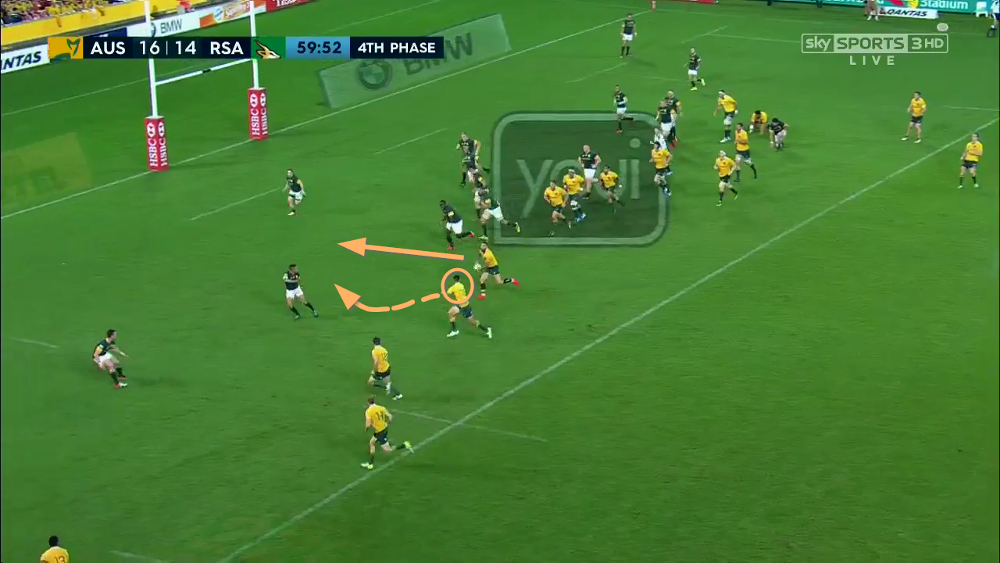 There will be blood spilled on both sides of the ball, and plenty of it, if Dave Rennie decides to feature Quade Cooper and Samu Kerevi in his matchday squad against the All Blacks, and for the remainder of The Rugby Championship.

If Quade plays, there will be at least one important defensive lapse, although it will probably be outweighed by his contributions with ball in hand. He may still have the odd brain-fade, but the range of passing, and the subtle variations of positioning in attack are still spectacular.

The choice of Samu is a no-brainer: Australia simply has no other player with his combination of power, physicality and offloading skills in the midfield. He is even more powerful than De Allende, and that is saying something. He could become the dominant midfield personality of the entire tournament.

Whatever Dave Rennie does, it looks like Australia will be looking towards age and maturity, in order to play a more youthful, cutting-edge game on attack. Their head coach will be turning back the hands of time in order to move the Wallabies development schedule ahead before the World Cup arrives in 2023.