The All Blacks have sprung a few surprises with Brad Weber named to start at scrumhalf while Tupou Vaa’i will start on the bench for the third Bledisloe Cup game in Perth on Sunday.

It means New Zealand has an imposing list of reserves with TJ Perenara, Damian McKenzie and George Bridge all on the bench. Richie Mo’unga, Sam Whitelock and Aaron Smith were not available.

The All Blacks made one change from the starting forward pack from the Bledisloe Cup-winning Test in Auckland last month, with lock Scott Barrett coming in for Whitelock in the second row.

Patrick Tuipulotu has a groin injury which sees Tupou Vaa’i come onto the bench for his first Test of 2021. Ethan Blackadder also comes onto the bench as loose forward cover. Ardie Savea will captain the All Blacks for the first time at number eight.

Weber gets his second start at halfback in his 11th Test, with TJ Perenara to provide impact off the bench.

Beauden Barrett is at first five-eighth while Anton Lienert-Brown returns from injury at centre, outside David Havili. Rieko Ioane moves to the left wing, Will Jordan is on the right wing and Jordie Barrett is at fullback.

All Blacks Head Coach Ian Foster said: “We are ready, and the team is really determined to finish off this block of Tests against Australia with a top performance.

“We’ve had a really unique situation going into this Test, with quarantine back in New Zealand and a ‘soft’ quarantine here in Perth, but the work that has gone in preparing the players has been outstanding, so when the whistle goes on Sunday, we’ll be ready.

“In the forwards, we have picked a group that is most recently battle-hardened. A lot of them played in the first two Bledisloe Cup Tests, so it’s right to go with them.”

Commenting on the halfback selection, Foster added: “Brad has been with us through the Steinlager Series and coming into the Rugby Championship, we really wanted to build the nine combination, especially with Aaron not here and to complement TJ’s leadership and experience, so this is a great opportunity to put our faith in Brad to start the Test.”

Earlier, New Zealand legend Jeff Wilson said that Beauden Barrett can ‘change the narrative’ around the All Blacks No.10 jersey by grabbing his chance in the absence of Richie Mo’unga in The Rugby Championship.

Wilson speaking on SENZ radio on Friday morning, also down played Australia’s success earlier this season against France, and suggested the Bledisloe 3 hosts were under intense pressure to salvage their winter Test season.

Barrett will take over from Mo’unga in his preferred position with Mo’unga one of three starters to miss the match in Perth because of impending childbirths, along with Sam Whitelock and Aaron Smith.

“I’m intrigued to see how qickly he steps up and says ‘it’s mine again’,” Wilson said. 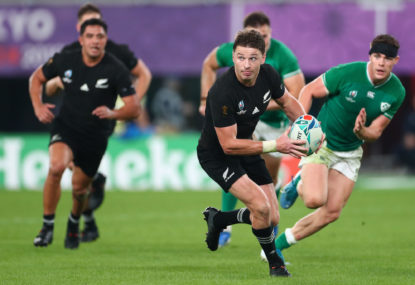 “Does that happen from minute one? I don’t think we can underestimate (him). This guy is one of the best and most talented players we’ve ever had.

“He’s had huge impactful performances for the All Blacks. There has been some frustration from him because he wants to be first five – you see it in interviews now where he says ‘I want to prove that’s where I’m at my best’.

“Does he change things for the All Blacks? In some ways he certainly does with the way he plays the game.”

Wilson said Barrett could reclaim the jersey for the long run to the 2023 World Cup if he chose to focus on that goal.

“There’s a lot going on with him. Everything seems to be happening around him and in some ways that’s probably added some pressure to him,” Wilson said.

“He’s a guy who understands pressure though and he’s certainly made some big decisions – going to Auckland, going to Japan, taking his financial sabbatical over there.

“You can’t argue with him wanting to support the family and look for a different experience but you’d like to see, for the next two years, his focus is going to be on helping the All Blacks go and win a Rugby World Cup.

“That’s what it takes. That’s what it took for us to win in 2011 and 2015 – it needed some key people to be 100 percent obsessive and so passionate about it that they drive that culture and drive the team toward that goal.

“We didn’t get it all right in the last World Cup but the next five weeks, with South Africa on the horizon, this is well and truly his huge opportunity to change the narrative that Richie Mo’unga is our first choice first five.”

Wilson meanwhile was clearly unimpressed by what he has seen from the Wallabies this winter and believes coach Dave Rennie will be concerned.

“He’ll be starting to get frustrated that they are, for periods of games, competitive and put pressure on the All Blacks,” Wilson said.
“The question is whether or not they can, in reality, go out and beat the All Blacks at their own game.

“They are one of the few teams that has the right skill set. They can bring a level of physicality and pressure.

“There are areas of their game they are getting parity at. They’ve got great leadership in terms of Michael Hooper – I couldn’t be more impressed by what he’s shown on a beaten team against the All Blacks.

“This Test match is more about them than the All Blacks. The All Blacks have momentum, they’re playing with confidence. All of a sudden you start thinking ‘I see some consistency in the way they’ve built through the season’.

“The Wallabies are the team that are seriously under pressure.

“So many expectations. There has been a lot of talking in terms of what they think their role should be in the Pacific rim, but you have to back that up with performances.

“Last year they drew with Argentina twice, they’ve been well and truly beaten by the All Blacks, and if we think about their performances against a France side that wasn’t their top team – it was a B+ side – they only just scraped past them.

“They’ve got massive strides they have to make if they’re going to be competitive on a consistent basis. They have a tough few weeks ahead of them and they need to step up.”