After one of the all-time classic semi-finals, the Bulldogs have come out one-point victors and are through to the preliminary final, while Brisbane have suffered their second straight-sets exit in three seasons.

The match looked destined in the last quarter to be bound for extra time, but a late Laitham Vandermeer behind proved to be the difference as the Doggies claimed a famous win.

There’s plenty to discuss from tonight’s classic, here are the four talking points at the forefront of my mind.

The crucial last free kick was there

As has unfortunately been the case for Brisbane in home finals of recent years, umpiring decisions not going their way in a narrow loss has again become a big talking point.

But, unlike the blatant throw that led to Brent Daniels’ semi-final winner of 2019, the last-minute free kick that led to Vandermeer’s crucial behind was fair and square. 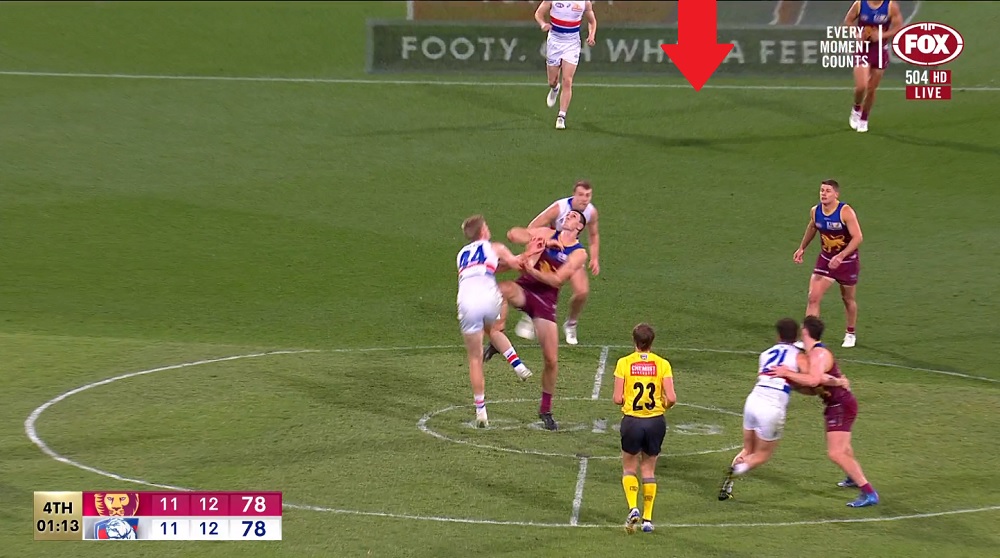 Oscar McInerney ran well past the flight of the ball (indicated by the red arrow) and blocked Tim English’s path. In the milliseconds prior to this screenshot, he had his eye firmly on the opposing ruckman too, not the ball.

Robert Findlay has no choice in that circumstance but to blow the whistle and he made the correct decision.

It was sad way for McInerney’s night to end because he’d otherwise been absolutely dominant and was a key factor in Brisbane’s midfield being able to go toe-to-toe with their vaunted opponents.

But the free kick that is no doubt being dissected at the Pineapple Hotel right now was well and truly there.

A win for the ages, but at what cost for the Bulldogs?

The Bulldogs have got that magic about them like they did in 2016.

In truth, both years they had been top four teams for the majority of the home-and-away season, so the fairytale aspect of their runs through September has a bit of mayo on it.

But this was an extraordinary win and, if 2021 ends like it did five years ago, there’s every chance this game ends up in the same part of Doggies’ fans hearts as the 2016 preliminary final against GWS.

However, the one-point triumph could have come at a massive cost, with Cody Weightman almost certain to miss next week’s Port Adelaide clash with concussion, while Marcus Bontempelli also came off in the fourth quarter after landing awkwardly on his knee.

Weightman came off second-best in a seemingly innocuous collision with Marcus Adams just before half time, but the fact he was subbed out during the main break means he must’ve failed his head injury assessment. 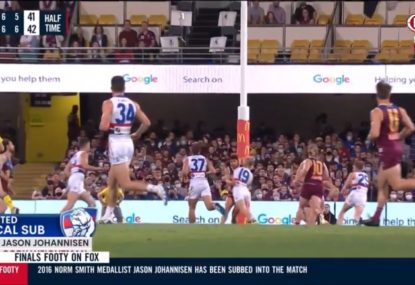 WATCH: The incident that ironed Dogs young gun out of the semi-final

The Dogs lacked spark in the third quarter without their go-to small forward and it took some of their midfield stars bobbing forward in the fourth quarter to get the scoreboard ticking again.

His absence against Port Adelaide could be a huge factor.

Bontempelli, on the other hand, was confident after the match that he’d be okay despite coming off in serious pain after appearing to injure his knee.

He was walking around freely without ice after the final siren, but if his preparation is at all hampered for the preliminary final, that could also be huge.

"It should be alright… just landed kinda awkwardly."

We always knew the ridiculous depth of the Bulldogs’ midfield would be impossible for opposing sides to deal with in 2021, but tonight it was on show perhaps more than it had ever been all season.

Adam Treloar had just seven disposals at half time, while Tom Liberatore only had six touches to go with his two early goals.

Normally, if a side had midfielders of that calibre stifled to that extent, it’d be game over.

Not the Doggies. Jack Macrae was absolutely everywhere, amassing 24 disposals, seven clearances and five score involvements in the first half alone.

Bailey Smith was massive, collecting 27 touches, three goals (two in the last quarter) and nine inside 50s, while Marcus Bontempelli was his usual self with 29 disposals and nine score invovelements.

Ken Hinkley can put every single waking hour into stopping Macrae next week – and he may just succeed. Luke Beveridge will just turn to another member of his assorted half-dozen to get the job done without a second thought.

Brisbane were very close, but just not close enough

The Lions were very much up for the fight across the first three quarters, putting in a superb effort in the engine room after last week’s poor display against the Demons.

They had 26 points from stoppages on the board at the main break, tracking extremely well against their season average of 39.3 per game – the competition’s best.

Jonathon Brown, in Fox Footy’s commentary, noted their improvement at half time.

“The Lions need to score from clearances. They’ve been able to do that.

“Last week, they were nowhere near that number against Melbourne.”

Even contributions from Lachie Neale, Hugh McCluggage, Dayne Zorko and Jarryd Lyons had the Lions in the hunt and the stats made for pleasant reading at both half time and three-quarter time.

Brisbane were dominating the hit-outs and had built up healthy advantages in clearances (+8), tackles (+13) and inside 50s (+13) as they led by ten at the final change.

In the fourth quarter, however, the Bulldogs got right on top. They monstered their opponents in the clearance count in the final quarter and put much more pressure on the ball carrier and the Lions just couldn’t go with them.

Defensively, they set up very well too – forcing Brisbane away from the corridor and not giving their forwards a chance to set up or find space.

In truth, the home side should have translated their efforts from their first three quarters into a bigger lead. Charlie Cameron barely saw the football after his electric three-goal first quarter, Joe Daniher had a night to forget with just six touches and two marks, while Lincoln McCarthy played his role without being spectacular.

Missing Eric Hipwood and Daniel McStay obviously wreaked havoc with their structure and noticeably forced them to play a more counter-attacking style of football to generate their scores, but my biggest takeaway for Brisbane is that they’re still probably short one more matchwinner inside forward 50.