UNBELIEVABLE! Bulldogs snatch one-point win in semi-final for the ages!

The Roar
4th September, 2021
31
Join the conversation
Advertisement
Write for The Roar

The Western Bulldogs are through to the preliminary final after emerging victorious in one of the all-time great semi-finals, defeating the Brisbane Lions by a single point.

But the big talking points from the match could be crucial injuries to Marcus Bontempelli and Cody Weightman. Weightman exited the game at half time with a head knock after an accidental collision with Marcus Adams, while Bontempelli copped a knock to his knee in the last quarter and came off under duress.

The Bulldogs skipper returned to the field, but the Dogs will be monitoring his knee closely.

Coming into the final quarter down ten, it was Bulldogs who’d start the last term the better. Lachie Hunter sent an excellent centreing ball to Jack Macrae, who kicked truly to reduce the margin to four points.

Then, it was ex-Lion Josh Schache’s turn to hit the scoreboard with a snap from point blank after Harris Andrews lost touch with him. Bailey Smith, who set Schache up just seconds earlier, then made it four in a row for the Dogs with a floating ball that somehow eluded the hands of Marcus Adams on the goal line. 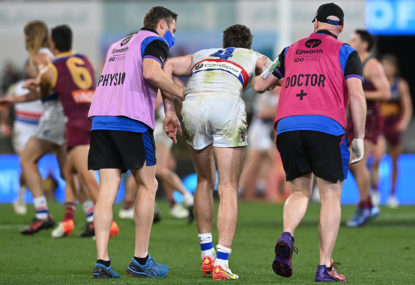 The Dogs had the Lions hemmed in their own defensive 50, but some fantastic composure from Bailey helped them break through and start to set up camp at the other end of the ground instead. Tom Fullarton finally provided the break through after marking Daniher’s wobbling kick from the pocket at the top of the square to make the margin a solitary point.

From there, both sides peppered the goals to level the scores – with the Lions missing the lot on two occasions when they would’ve killed for a behind.

Brisbane had the ball in their forward 50 more, but the Dogs got the all-important goal with two minutes remaining courtesy of an incredible kick on the run from Bailey Smith – his third of the evening.

But just as that looked to be the winner, the Lions struck with 74 seconds remaining. Lincoln McCarthy took a great mark in the back half of the centre square to kick off the rebound, before Zac Bailey took a ground ball inside 50 and phased through defenders to kick a tying goal on the run.

The Bulldogs got a controversial free kick from the ensuing centre stoppage, however, and Laitham Vandermeer was able to hurry the ball through for an important behind with 54 seconds remaining.

The behind that won the game for the Doggies ????

The Lions got the ball forward with seconds remaining, but Dayne Zorko’s hurried kick inside 50 with six seconds left sailed out on the full to decide the match.

After last night’s semi-final left a bit to be desired in the entertainment department, both sides put on an absolute show in a memorable first quarter.

Tom Liberatore kicked the first of the match with a quick looping snap from half-forward through the vacant goal square, but the Lions held firm down back and prevented more initial damage.

A great tackle by Jarryd Lyons on Marcus Bontempelli at half-back set Brisbane off on a counterattack and the penetrating kick inside 50 found a free Charlie Cameron. He nailed his set shot to level it up.

A stunning piece of play from the Lions leads to their first goal for the night ????

Liberatore sent his second snap through the big sticks – this one much more impressive than the first – to get the Dogs back out by eight soon after.

The Dogs were winning the ground ball, but Brisbane were looking lethal on the rebound and got in behind again when a long kick to full forward saw Lincoln McCarthy awarded a free kick.

He nailed the easy set shot and the Lions were back on level terms, before another goal out the back from Joe Daniher off the ensuing centre clearance put the Lions up despite being on the back foot in general play. Cameron then nailed his second – Brisbane’s third goal from four kicks – to give the home side a surprise 12-point lead.

The goals weren’t just flowing one way. The Bulldogs got an instant reply at the other end after Bailey Smith’s soccer amidst the chaos split the outstreched hands of two defenders.

But Charlie Cameron was intent on getting himself back on the highlight reel after kicking one of the goals of the finals in another instant reply. He turned on the afterburners, leaving Easton Wood in his wake, before nailing a very difficult running shot across the body to re-establish the 12-point buffer.

That's THREE in the first quarter for Charlie Cameron ⚡

The second quarter had a lot to live up to and it was the Dogs who’d strike first through Aaron Naughton.

It was a far more subdued second quarter after all the electricity in the first, but Mitch Hannan was able to level the scores at the 11-minute mark after taking a surprisingly easy grab from a high, shallow kick inside 50 and nailing the tough set shot.

Cody Weightman was then able to put the Bulldogs in front two minutes later. He looked to have taken a superb mark inside 50, before dropping it, but was able to receive the handball from Naughton and slam through one he deserved.

Cody curls it home to put the Dogs back in front ????#AFLFinals pic.twitter.com/cZQTW0Rs27

Brisbane had no interest in being blown away, however. They took advantage of a turnover at half-back and held the ball in after the Dogs regained possession, with Mitch Robinson finishing the play off with an excellent running goal.

The margin was a slender one point in favour of the Bulldogs at the main break, but they were rocked during half time after Weightman was subbed out with a head knock – and they came out flat in the third quarter.

The Lions hit the scoreboard first in the after Hugh McCluggage took a great grab under a high ball next to the point post, before finishing it off with a good kick around the corner.

Zac Bailey was able to put the home side out by two goals almost ten minutes later with a great set shot from just inside 50.

Meanwhile, the sprinklers could’ve been turned on in the Bulldogs forward 50 and nobody would’ve been inconvenienced.

The Bulldogs did eventually start to generate some chances and were unlucky to have a Bontempelli goal taken off the board after the ARC found it was touched off the boot.

A crucial overturn of what could've been a Bontempelli goal.

Medical sub Ryan Lester kicked his first goal in four years to give the Lions four in a row and a commanding 18-point lead, but Jason Johannisen, the Bulldogs’ medical sub, replied instantly with a ripping goal on the run.

Alex Keath had a golden opportunity to kick a rare goal and bring the margin back within a goal thanks to a 50-metre penalty, but his relatively simple set shot drifted to the left.

Controversy reigned in the last few second of the quarter, with two contentious free kicks – one for deliberate out of bounds and one for holding the ball – gave Johannisen a chance to make it five points at the final break, but his set shot sailed right to see the margin reduced to ten instead.