We all know the story, the Poms land Down Under in the summer of 1932-33 armed with a new method of attack and eager to avenge the humiliation of 1930.

After some brave resistance, the Aussie bats crumble against a barrage of half-pitched slingers aimed at the ‘scone’. By March, Douglas Jardine and company depart with the Ashes and the Australians are left to ‘pick up the pieces’. In the wreckage, they take away three lessons: Bodyline bowling was not in the best interests of the game, this form of attack was unplayable, and of all the Australian batsmen, Don Bradman handled it better than anyone. ﻿

In the legend that is Australian cricket, these have entered into lore as concepts beyond dispute.

Jordan Petersen, the well-known Canadian Psychologist, is famous for his precision when it comes to the use of language. Unlike the rest of us, Petersen chooses his words very carefully.

If he knows anything about cricket, I am sure that he would acknowledge the difference between performing best in the Bodyline series and performing best against Bodyline bowling, one does not necessarily confer the other. For those not aware, the Bodyline series did not involve a non-stop bumper salvo 24-7; approximately 20 per cent of the Englishmen’s attack involved the spin of Hedley Verity and Tommy Mitchell, another 15 per cent was in the form of Walter Hammond’s right-arm medium pace.

Of the three fast bowlers, Gubby Allen refused to employ the controversial tactics. As a result, the Australians would only face the onslaught from Harold Larwood and Bill Voce who, between them, would deliver 44 per cent of all the overs.

Furthermore, Jardine never used Bodyline when the ball was new, and he also refrained at other times so that this deadly form of bowling represented no more than 20-25 per cent of the entire attack. Therefore, ‘handling Bodyline’ really translates into handling Harold Larwood and William Voce later into each innings.

Below we have the record of the principle Australian batsmen against the deadly duo for the entire season:

This table puts things into perspective. Bradman, through his dominance of Hammond, Allen, Verity and Mitchell, managed to head the batting averages but claims that he ‘handled Bodyline better than the others’ are simply not grounded in reality. Over the entire summer, Larwood collected his scalp approximately once every 36 balls.

At the time, there was broad agreement among batsmen as to the unique difficulties that Bodyline presented. Conversely, opinions differed when it came to the best way of countering this new-fangled menace.

One idea was to adopt the attritional approach – grind the fast bowlers into the Australian dust under a blistering sun, a strategy that was championed Bill Woodfull and Jack Fingleton, with mixed results. Another school of thought posited the idea of a controlled counter-attack; get your eye in, see off the new ball and then at the right moment, introduce the horizontal bat strokes.

McCabe, Darling and Richardson belonged to this cohort. Finally, there was the method employed by Bradman and the tail-enders of backing away to leg and slashing through an unprotected off side. As one might have suspected, this strategy brought little success. According to Jack Fingleton, rather than risk a nasty blow, the bowlers were asked to sacrifice their wickets (see 1:45).

But this approach was only recommended for the bowlers and according to those in the know Woodfull expected his star batsmen to stand his ground, even if this meant taking a few on the body. Of Bradman’s seven dismissals at the hands of Voce and Larwood, four times he was castled after sideling, crab-like, two feet outside the leg stump or two feet outside the off.

Correct or ill-judged, the Don’s methods drew harsh criticism from many quarters. Former Australian captain Monty Noble pulled no punches when he claimed that Bradman was letting the side down.

“Bradman suddenly developed a sensational desire to score off everything, regardless of the safety of his wicket. His opposition revelled in his indiscretions and laughed up their sleeves because he was doing just what they wanted” (Cricket Crisis, Pavilion Books, London, 1984, p53).

In the second innings of the Adelaide match, the Don’s last nine deliveries off Hedley Verity went: (24∙41∙∙6W) and included two wild hits to long on before being caught and bowled attempting another big drive.

Jack Hobbs came Down Under as a journalist and according to ‘The Master’ “There was a good deal of grumbling around the ground as Bradman went – people were saying that he threw his wicket away as soon as he saw leg-theory (Larwood had just reverted to the Bodyline field setting)” (Cricket Crisis, p53).

And worse was to follow in the fifth game when he wrote “At any rate, Woodfull played for his side, which was more than Bradman did.” (Cricket Crisis, p54).

By the end of the series, the barbs were upfront and unforgiving, ex-England captain Arthur Gilligan: “Bradman is definitely Larwood’s rabbit.” (The Herald, Melbourne, February 24, 1933, p2). Although a majority agreed with Gilligan, there were also a few who supported the Don and the methods he employed.

As I see it, the real problem with this back-away and slash strategy – even if Bradman could have averaged 60, head-to-head with Larwood – was in the affect this method had on England’s morale.

Josie Wales, Shire, Micko, Ian and I have recently been debating other Roarers as to the relative significance of first innings runs (as compared with those from the second) and the related concept of ‘soft runs’.

Those of us who accept that psychological factors play a huge role in performance, believe in the primacy of first innings runs. To give just a simple example, keeping all other variables steady, it is much, much easier to post 500 in reply to a would-be total of 78, than to do so in response to 378. Confidence, momentum, the joy of making a great start, all these feelings facilitate future outperformance, which brings me back to Bradman and his controversial back-away and slash routine.

Respected Australian critic Ray Robinson echoed my own thoughts when he said “It is half the battle for a batsman to act as if he is master (or at least gaining mastery) and never to betray himself to the bowler with signs of discomfiture, Bradman’s battle was half lost in quick time.” (Between Wickets, Collins, London, 1946, p74). 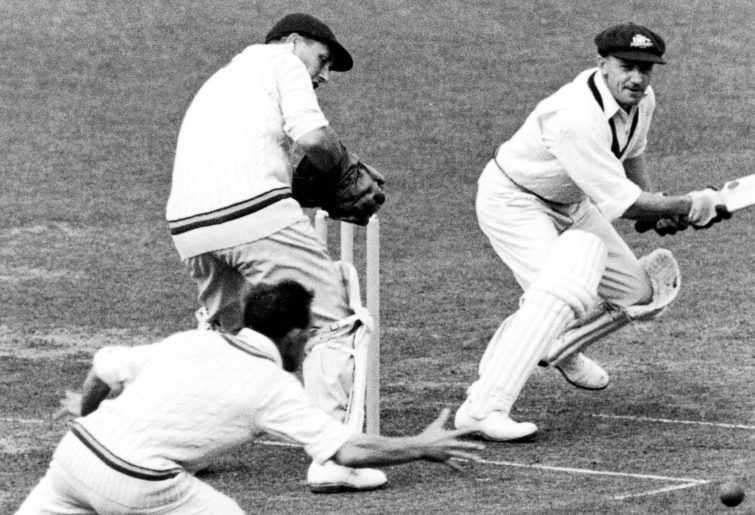 With his cavorting around the creases, Bradman was giving a visual cue to the opposition that might have translated – ‘hey guys, I don’t fancy this stuff one little bit and, as the best batsman, if I can’t handle it you can be sure the rest of my team can’t either’.

And then, just in case the Poms didn’t ‘get the memo’, The Don gave further clues about how he really felt against this form of attack. Before the Tests began, Bradman asked Woodfull if he could move down the order, needless to say, it was an appeal that shocked teammates. Aware of the request, Ray Robinson described Don as the reluctant dragon.

In the modern game, it is an axiom to not sledge the champion players because such an act would only provoke them into displaying their very best form. Bradman’s tactics were achieving the exact same effect.

Some batsmen thrive on a difficult or dangerous assignment: the sticky wicket, the dangerous pitch (like in the ‘battle of the ridge’), the come-from-behind, the subcontinent dustbowl, or the gang of speedsters, and we can all remember those who relished such a challenge: Allan Border, Bill Lawry, Graham Gooch, Vivian Richards, and Victor Trumper.

One could almost say that Richards even welcomed the chance to prove his bravery and fearlessness. If he was at all worried about injury, the ‘master-blaster’ did an excellent job of hiding it. Bradman, on the other hand, for all his unique qualities, did not seem to possess that element of physical bravery.

When it came to the Bodyline peril, the Don abdicated his throne and joined the class of the also-rans.