Every now and then, a decision is made that is so momentously bad, it leaves you outraged.

For example, allowing a new coal mine – any new coal mine, but in particular, one to be built in the catchment of the Great Barrier Reef. Or, like the Coalition government’s stubbornly embarrassing inaction on climate change.

Outrageous decisions that make you think now is the time to stand up and speak out.

And now is one of those times.

So, what is it with the Dragons and Tariq Sims?

What is it with the Dragons?

Sims typifies what any club should be about. It just so happens this club is the one he grew up supporting and would have played his whole career at given the choice.

He is the only Dragons player to be selected for the Blues this year, and he would have played close to a decade of Origin if not for two badly broken legs early in his career.

Just ask Brad Fittler what Sims brings to a team.

He represents a hard edge in a team that has been playing like its edges are made of butter. He has that raw toughness seen in forwards during the game’s most brutal history, yet with an approach that doesn’t cross the line all players understand. 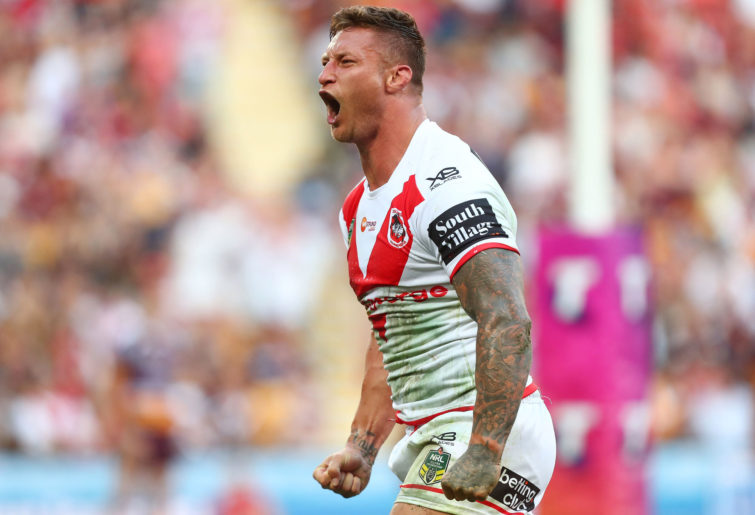 At 31, is he still the player he was? At worst, he is not far off. And his extended absences from the game with injury in those early years have preserved his drive and determination, and possibly given him some longevity. I reckon if you’re good enough, you’re not too old enough.

Alex Glenn played the same position as Sims and has just retired at 33. He was given a moving send-off by his club and his opponents because they respect the man and what he has brought to the game. And despite heart-breaking results as a club over recent seasons, the Broncos culture would never have allowed a player like Glenn to be treated like Sims looks set to be.

He has a year to go on his current contract and was seeking an extension beyond that. If he doesn’t fit into the club’s plans beyond 2022, so be it. But why would they show him the disrespect of saying they don’t care if he walks now, knowing what he can provide in his final year playing for the club he loves?

There is talk that Sims has been in bad form and that is a justification. That is ridiculous. Poor form does not equate to being over the hill. And a good player doesn’t stop becoming a good player overnight.

The whole Dragons team has been in bad form, and this is often infectious, even to the most committed of players. Look at the recent form of Josh Hodgson, Jarrod Croker, and Jack Wighton for the Raiders.

To those of us who don’t understand the bizarre workings of club hierarchy, it would appear the Dragons’ approach is to gradually clean players out – from the best player down!

Tyson Frizell walked, and you couldn’t blame him. Then players’ player of 2019 and 2020 Cameron McInnes was told he was surplus to requirements. He, like Frizell, was one of the few who left everything on the field every week, regardless of team form or how important the game.

It was the ultimate insult to their captain, whose last experience with the club was a season-ending knee injury. Now, their latest captain and biggest champion has suffered a mouth injury to end his season, just when he is looking to be spat out by the club he has idolised since childhood.